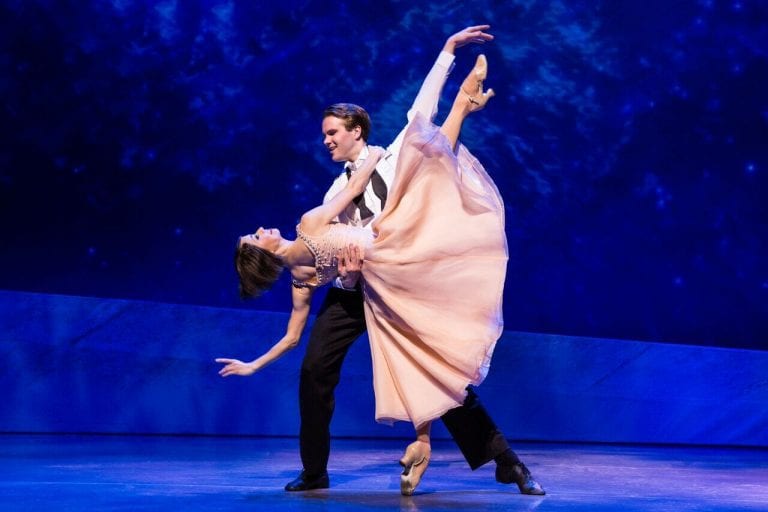 McGee Maddox and Sara Esty are marvelous in the lead roles. (Photos by Matthew Murphy.)

Review: “An American in Paris” isn’t perfect, but it’s carried by those amazing Gershwin tunes

The creators of the new Broadway musical An American in Paris, the touring version of which is at Atlanta’s Fox Theatre through August 20, have placed their money on the pretty safe bet that the answer to that famous old question will still be a resounding yes.

Overall, it’s an appealing show, but at times, a strange one. The musical, based on the beloved 1951 film, still has those can’t-fail Gershwin songs, great dance numbers and an evocative Parisian setting, but it doesn’t have a great deal of what made the film so distinctive and memorable: Gene Kelly and Leslie Caron aren’t in the lead roles, of course, but just as significantly, one discovers how crucial Vincente Minnelli’s technicolor 1950s Hollywood dream of post-war Paris was to the film’s success.

Here, designer Bob Crowley relies too heavily on projections for his sets. Though the images are often inventive, they’re also flat and lose color and sharpness under bright stage lights. Overall, they lack the confectionary color and flair of the sets that gave the film its vividness.

Strangely, the evening’s most elaborate and memorable set piece is from a dream sequence in which a jazz performer imagines he’s on the stage of Radio City Music Hall. Clearly, something’s amiss if the most eye-catching number from An American in Paris takes place in old New York. Overall, the look of the show isn’t as dazzling as one would hope for.

Still, just as Ol’ Blue Eyes indicated, it’s hard to go wrong with a Gershwin tune, and the show contains many of the most beloved classics, given appealing life by a strong cast. “They Can’t Take That Away From Me,” “The Man I Love,” “Who Cares?” and more all sound great, though somewhat problematically, the evening’s best, most rousing number — “I Got Rhythm” — appears as the first song in Act One.

In keeping with the spirit of the film, dance remains a strong focus, and much of the choreography — including an extended, appealingly retro, 1950s avant-garde ballet version of the title work — was created by renowned British ballet choreographer Christopher Wheeldon, who seems to perfectly understand and honor the dreamlike, wispy, nostalgic energy that’s called for. Wheeldon is familiar to local dance fans for “Rush,” a piece commissioned by Atlanta Ballet and performed in 2012 and again in 2013.

Leads McGee Maddox and Sara Esty in the Gene Kelly and Leslie Caron roles dance beautifully; Esty is a former company member of Miami City Ballet, and here her character, Lise, is turned into an aspiring professional ballerina, giving her and others plenty of opportunity to perform Wheeldon’s work with its fittingly throwback pop-ballet sensibility. Audience members who arrive conceptualizing the show as an evening of dance that also has some great music and a slight narrative tenuously holding things together will probably leave the happiest.

The dance sequences have an old-fashioned, dreamlike extensiveness: a wordless dance might take us from one scene to the next, or even across several scenes, or into dreams of New York, or into an imagined vision of dancing with a partner who isn’t actually present. It’s pretty simple, standard old-musical stuff, I suppose, but it can also be surprisingly confusing.

Some women seated next to me arrived late and were totally baffled by the goings-on, asking me to clarify at intermission, and I had to admit there were a couple of moments where I lost the plot as well. Deep into one dance sequence, characters arrived at a costume party, and with the stage suddenly populated with hallucinatory demons, harlequins and gypsies, I totally forgot which characters were meant to be at this strange party or why they were there or even if they were still meant to be in Paris at all.

Still, in the end, it’s not really about the plot. The story itself may be lighter than air, but overall, An American in Paris does exactly as it should, making it very easy indeed to like a Gershwin tune.