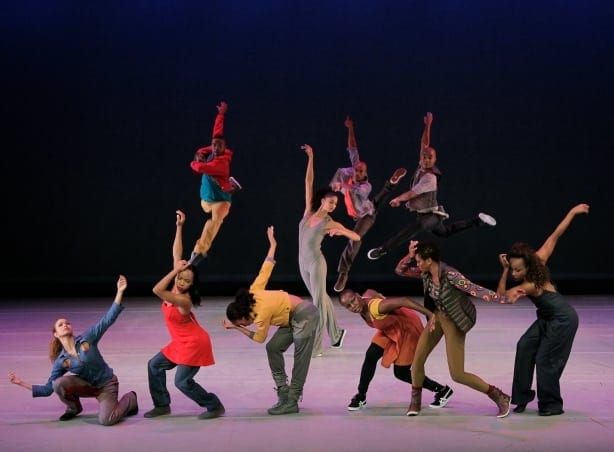 The lights slowly rise to reveal a frozen group of silhouetted dancers in loose street clothes. One, Matthew Rushing, thrusts his long arms upward, weaves away from the others, places one hand on his chest and reaches the other to the sky. The only sound in the theater is the pulsating thump of a human heartbeat.

There was something electric in the air Thursday night when the Alvin Ailey American Dance Theater performed “Home” in its Atlanta premiere at the Fox Theatre. It represented the best that a dance piece can offer: a meaningful reflection that is both personal to the company’s history and universal to the human spirit.

“Home” combined the quick, rhythmic footwork of hip-hop with modern dance’s grace and ease, transforming the language of hip-hop into a potent expression of theater. A life-affirming work inspired by stories of those affected by AIDS, it also took the audience back to the 1980s. The legendary Alvin Ailey, the company’s founder, himself died of the disease 22 years ago.

The choreography showed a depth of pain that felt unforced and honest, but it also reflected a community’s unbridled hope and strength that referenced Ailey’s signature piece, “Revelations.” At one point, the cluster of dancers were bathed under golden light, torsos bowed forward with hovering arms, a homage to the opening of Ailey’s masterwork.

As the piece gained momentum, Rennie Harris’ choreography led the troupe into a full-blown dance-off. Rushing acted as a spiritual guide, clapping his hands as if in a gospel choir. The dancers’ high-speed, grounded footwork blended with smooth hip and torso undulations to the rhythm of the repeated words “the place where the sun don’t shine.” The soul-lifting score, a blend of house and gospel music by Dennis Ferrer and Raphael Xavier, pulsed and built up into an ecstatic moment when the dancers gave new meaning to a spiritual revival.

In an especially poignant moment, a woman broke from the grooving thicket of dancers and ran to the front of the stage. Rushing caught her in the air as she appeared to fling herself toward something unknown. She reached over his shoulder, desperately clutching at what she sought. Then, realizing it was unattainable, she melted into his embrace. What a beautiful illustration of the struggle with societal rejection and alienation.

While the dancers flawlessly achieved “Home’s” relatively loose movement, Paul Taylor’s “Arden Court,” with its complex groupings and floor patterns, posed challenges for the troupe. It rose to the occasion with power, athleticism and panache.

There was a simple beauty to the floral imagery and formalistic configurations. Often the work seemed patterned after the form of a rose, suggested by an enormous image on a rear cyclorama. Elegantly, “Arden Court” explored contrast in speed and body shape. Some forms were tightly coiled, like a flower’s inner petals; others were broad and wide, like petals that have opened outward.

The male dancers showed youthful buoyancy with vigorous jumps, handstands and cartwheels off one another’s backs, while the women displayed a strong, statuesque elegance. Perhaps the most beautiful parts were a pair of duets where women wrapped their legs around the men’s torsos at side angles with graceful dignity, as if in the shape of a rose, then coiled around their partners’ bodies as they snaked to the ground.

With such beauty and with “Home’s” vivacious awakening, Robert Battle’s work in his opening season as the Ailey company’s artistic director was a pleasure to witness. Even his short solo “Takademe,” performed by Kanji Segawa, delighted Thursday’s audience with its humor before leading into Ailey’s beloved and faithful “Revelations,” known for closing every show. This is evidence that Battle is right for his position. At the brink of a new era for the Ailey, Battle’s energy will likely usher this historic company into a bright future.