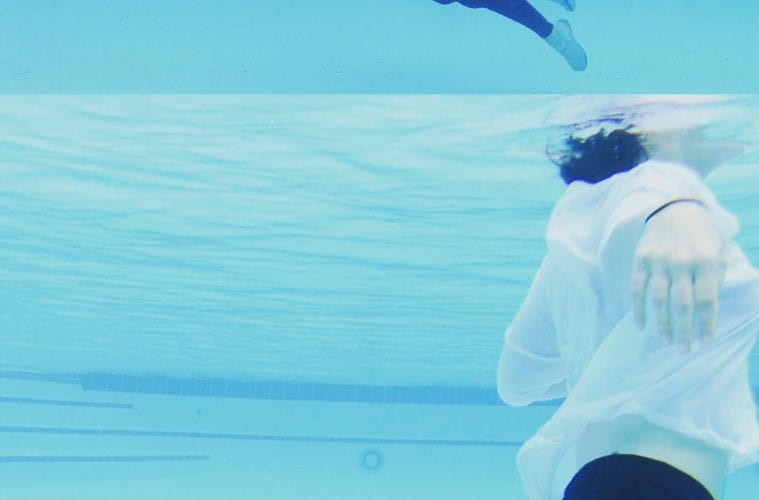 Review: The allure of summer re:FRESH

There is a cultural rhythm to summer that transcends school, the heat slowing down our productivity, bright nights a little more lively than usual and a restless need to get away. Swan Coach House Gallery presented a summer pop-up and seamless combination of two curatorial projects, I SEE WHAT’S HAPPENING… curated by Jordan Stubbs and summer swan songs curated by Karen Tauches. With a teen vibe and Tumblr aesthetic, re:FRESH mixes equal parts shenanigans, effortlessness and boredom — appropriate for a show about tuning out. Peak self-care can be found in Dianna Settles’ flat but sophisticated paintings. Daria meets Alex Katz in mundane scenes: characters sit around, eat Chinese food or apply a face mask. The “cannot-be-bothered” attitude fits reductive, confident construction of the works, which is amplified by the mix of matte and gloss, which lends the painting a just finished appearance. Small specific details, like the poster of 2046 (a Hong Kong romantic drama), disappear with a bit of code switching at play that “springs from the anxieties of both loss and reclamation of identity politics.”

Like two teens crashing a pool after hours, Jane Foley and Erin Palovick’s site-specific installation Silent like a Waterfall features the two artists swimming around while wearing athleisure. The two-channel video of the swim feels voyeuristic, the camera angles switch intermittently from body cam style to underwater CCTV. At one point, the video is refracted through a cut crystal bowl, which splits into a vivid prism of green rays — a gorgeous detail of the work. The peeping Tom feeling of the piece is amplified by interaction. In order to get to the upper level of the Swan Coach House Restaurant, where this temporary installation was set, viewers must be guided through the dark by Palovick and sent up the elevator with Foley.

Interiors_1.mp4 by Saige Rowe with Skylar Rowe is meta video of a video camera. The screen doubles its subject’s movements but occasionally syncopated and moves independently to the scene in front of the camera — images of the ceiling fan, of Saige sitting in a chair, of Saige being scooted around in the chair by Skylar. The sketches are infused with a feeling of anticipation. Equally opaque is Blare LeBlonk’s (a.k.a. Gently Yoused a.k.a. Blair LeBlanc) absurd video, Maggie, Morgan, and Tyler rub lotion on their leg. Three people are stuffed in one shirt, not quite Siamese triplets, more like three children dressing up as one adult. The two arms work in blind unison to lotion up one leg on a loop. It evokes themes of peer pressure or Bunraku, but besides that, I’m not sure what to make of the triune figure. Perhaps easiest to miss is the funfetti flecked copies of Hypersigil by Nicholas Goodly, if you generally follow the rule of not touching the art in a gallery. The stack of poems, lump of crystal and essential oils initially struck me as a simple installation, but with the encouragement of the show’s image list, I took one. It is worth it to go see this show to get a copy of this poem, which is so lovely, both as poetry and the paper it is printed on, that my instinct is to frame it. The title refers to a term used to describe a feedback loop between the self and an external presence, or in this specific case, the relationship with us and patience, “a lonely hue we become / a being into a lesson learned.”

Davion Alston takes on pop culture and sexuality in Another Body of/for Work. The image of a computer screen is divided into an approximate golden rectangle, a square of it containing a photo of Kim Kardashian climbing up a pile of dirt in heels on the internet (specifically from the Kanye, Juergen & Kim photobook), the smaller rectangle is an image on a dark background of Alston reclining nude in tall grasses.  The work is full of contrast: male versus female, the light grey of the Chrome browser aligned on bottom against the dark grey of Adobe (Lightroom, Photoshop, Bridge?), his nudity against her impractical fashion.

Also responding to internet phenomena is Aubrey Longley Cook’s translation of memes into cross stitches. This is an interesting subject because the medium strips the memes of their punchlines and casual ubiquity. Memes were first popularized by 4chan, which also gave rise to the toxic masculine alt-right, which Cook feminizes. In re:Fresh frogs face off in a side-by-side of but that’s none of my business, the meme of Kermit drinking tea hung next to rest in Pepe, an image of a frog dissection. The frog dissection is a not specific meme but refers indirectly to Pepe the Frog, the adopted mascot of white supremacists and alt-right, to the aghast of its creator cartoonist Matt Furie, who recently killed off Pepe in an anthology for Free Comic Book Day. In response to the use of Pepe during the election, Kermit memes were paired with #ImWithKer on a play on Hillary Clinton’s slogan, “I’m with Her.”

The opening night crescendoed with two performances. First, all attendees were ushered out of the gallery space to experience a spotlit poetry reading by Goodly as he stood on the outside staircase. Each poem was marked by anointing himself with the essential oils and then sharing with the crowd once he had finished. The show’s finale was a collection of EVP (electronic voice phenomena) ghost recordings by Meredith Kooi. She unveiled the instruments, previously shrouded, some propped up on green pillows, a kind of real-life ghostbuster. Kooi engaged with the Swan Coach House over the summer to make these recordings from the building, which according to Tauches is,  “Rumored to be haunted.”  The electronic buzz grew like the hum of cicadas, ever louder and creepily interspersed with pips of trumpet and trombone music, and speaking.

re:FRESH hinges on taking care of oneself and getting away, even if only temporarily and in your mind. Following the election, self-care became a buzzy overnight trend as a reaction to the daily onslaught of news campaigns. It can feel both necessary and suspiciously selfish. While putting on your own gas mask isn’t wrong, it’s a matter of what comes after self-care, whether it’s compassionately caring for others or staying perilously indifferent. In the uneasy balance between self-preservation and engaging actively with the world’s struggles, re:FRESH chooses to play it safe.