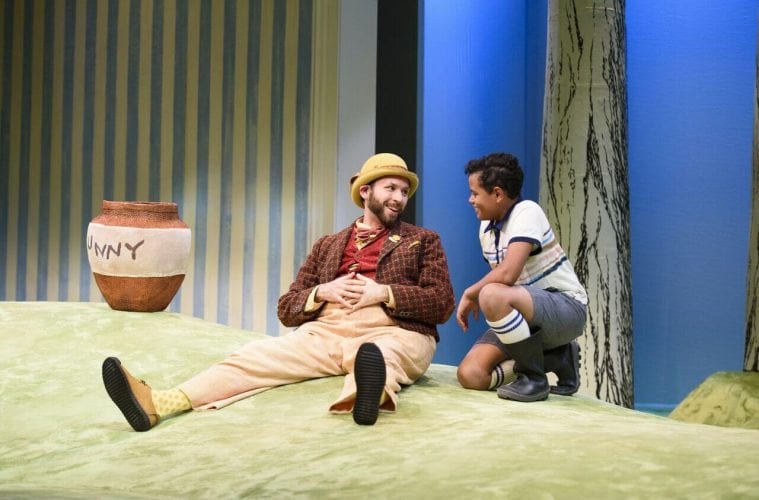 I couldn’t tell you much about what Winnie-the-Pooh has been up to since the game of Poohsticks in The House at Pooh Corner, the second and last of British author A.A. Milne’s collection of stories set in the Hundred Acre Wood. But apparently, the little guy has been busy.

Disney acquired the rights to Milne’s characters in 1961, and although the early films — the ones I remember from childhood — mostly stuck to episodes from the popular tales, a quick peek at what’s happened since then reveals that kids today are probably accustomed to seeing Winnie do a lot more than just playing Poohsticks, everything from dressing as a superhero and solving mysteries in 2010’s Super Duper Super Sleuths to celebrating all-American holidays like Groundhog Day and Thanksgiving in 1999’s Seasons of Giving.

What’s nice about the Alliance Theatre’s current family musical production of Winnie-the-Pooh (through July 8) is that it returns Pooh and friends back to the spirit of Milne’s classic stories and artist E.H. Shepard’s original illustrations. Many of Shepard’s sketches are currently on view at the High Museum’s exhibition Winnie-the-Pooh: Exploring a Classic, which arrived from London’s Victoria and Albert Museum where it originated in 2017. Seeing the play and visiting the exhibition (both at the Woodruff Arts Center) will make for a charming and enjoyable outing for families with young children this summer.

Milne’s Pooh stories aren’t exactly full of action and drama, and many of the most interesting and memorable episodes — a flood comes to the Hundred Acre Wood, or Pooh speculates about the many ways to reach the top of a tree to get honey from a hive — would be challenging, if not impossible, to bring convincingly to the stage. Le Clanché du Rand’s popular stage adaptation sticks to familiar episodes, such as the loss and recovery of Eeyore’s tail and Pooh getting his head stuck in a honey jar, that are easily enacted in a theater.

The events may be familiar to readers of the classic books, but the look is a wonderfully new and inventive mash-up of different elements. Mariana Sanchez’s playful scenic design transforms the Rich Theatre’s stage into a dreamlike Hundred Acre Wood that is, fittingly, one part forest and one part nursery room (various pieces of the set, such as tree branches and Piglet’s home, replicate the look of Shepard’s black-and-white ink illustrations). Characters in Fabian Fidel Aguilar’s lovely costumes are intriguingly part animal and part human, with clothes that evoke the 1920s time period when Milne wrote his works. Songs are short and sweet, and the best and funniest of them has Eeyore (Joe Sykes) lamenting the woeful life of a donkey.

As in the Disney films, the characters in the show seem American, but in the books, that world — with its nursery and tea parties and jam and its “Oh, bother. I’m all muddled” and the like — is distinctly British. I may be alone in complaining, but it’s also possible that kids familiar with the written tales may detect a strange disjunction, even if they can’t quite place it.

Things get busy onstage — du Rand combines and compresses stories to make one super eventful day in the Hundred Acre Wood — and curiously, the show centers on one of Milne’s least enchanting episodes as a sort of framing device. The characters gang up on a newly arrived immigrant to the forest, Kanga, and plan to kidnap her baby in order to convince her to leave. Rabbit, who hatches the plan, comes across as mean-spirited and bossy, and the characters who follow his designs come across as bizarrely gullible and simple-minded (and not in the appealing, Tao-like way we’ve been told is Pooh’s style). The goings-on seem more imbecilic than childlike. Still, Kanga’s touching, final words about the prescient episode will hopefully resonate in the hearts and minds of any mean-spirited or imbecilic adults who wind up in the audience: “Is new always bad? Life is full of new things all the time.”

The popular character Tigger, who was actually a late arrival in Milne’s tales, never shows up here at all, which may come as a big disappointment to some. (I heard a pathetic little voice ask where Tigger was during the show’s final bows; I kind of felt like asking the same.) Still, even without him, most children and their parents will find plenty to love in the Alliance’s appealing take on Milne’s timeless stories.