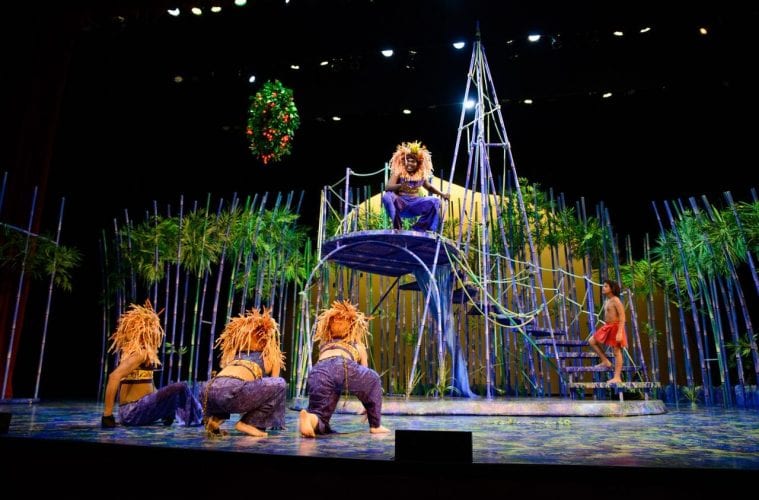 Review: Alliance’s “The Jungle Book” is ambitious, but misses a real sense of wonder

Given its rich source material and the Alliance Theatre’s ability to create stage work that can often appeal to both adults and younger audiences, the company’s new version of The Jungle Book — part of the Alliance Family Series — is something of a rare misstep, a project that never really finds its footing.

Staged at the Porter Sanford III Performing Arts and Community Center in Decatur while its own space is being renovated and running through March 4, The Jungle Book might please its central audience but isn’t likely to be a crossover success.

Adapted by Tracey Power from the classic novel by Rudyard Kipling, it’s pretty faithful. After his parents are killed in the jungle, young Mowgli (Caleb Baumann) is adopted by a family of wolves. His new clan includes Baloo the bear (Markelle Gay), who trains him; Bagheera (J.L. Reed), the black panther who mentors him; and Akela (Adrianna Trachell) the old wolf. After he has acclimated to the laws of the jungle, Mowgli has to learn to stand up to the fierce Bengal tiger Shere Khan (Jonathan Horne) who doesn’t think that, as a human, Mowgli belongs in the jungle.

Along the way Mowgli is kidnapped by monkeys and is also saved by a python.

Power’s adaptation premiered in Montreal a decade ago, and the author has done an efficient job of bringing it all together into a one-act play that runs a child-friendly one hour. This version is high in atmosphere. Kat Conley’s forest is gorgeous, with trees covering the entire stage and a revolving, hyperactive platform in the center used for a hub for its characters. It’s a busy show too — with nonstop action and animal activity, including a lively buffalo stampede.

The costumes by Sydney Roberts have been inspired by the natural environment of the Indian jungles. Yet the characters and animals are almost all dressed the same, and it can be a little confusing deciphering who each one is, especially that — save for Baumann — the other five performers play multiple characters.

The actors who play the animals walking on all fours use stilts to convey that, and it’s awkwardly handled by movement choreographer Jen MacQueen.

S. Renee Clark, who serves as the musical director, has also contributed an original score. Many songs fill the piece, but many of the nine selections don’t lead to full-fledged numbers. (Sadly, there’s no “Bare Necessities” here.) The opening “Laws of the Jungle,” which has a reprise and then a finale version, is catchy enough, but none of the others really stick.

The Jungle Book is directed by Rosemary Newcott, who serves as the Sally G. Tomlinson Artistic Director of Theatre for Youth & Families. It’s an ambitious project, but what’s eventually missing is any real sense of wonder or imagination. Granted, I’m clearly not the target audience for this show. But as someone who’s a fan of the work, I found this rather drab and uninvolved. I also couldn’t help but wonder what kind of magic The Center for Puppetry of Arts might have whipped up with the same material.

It’s hard to knock a project so beloved and one that has such relevant themes, as Mowgli finds an alternative family and learns the power to adapt. Yet this production of The Jungle Book seems like a missed opportunity.