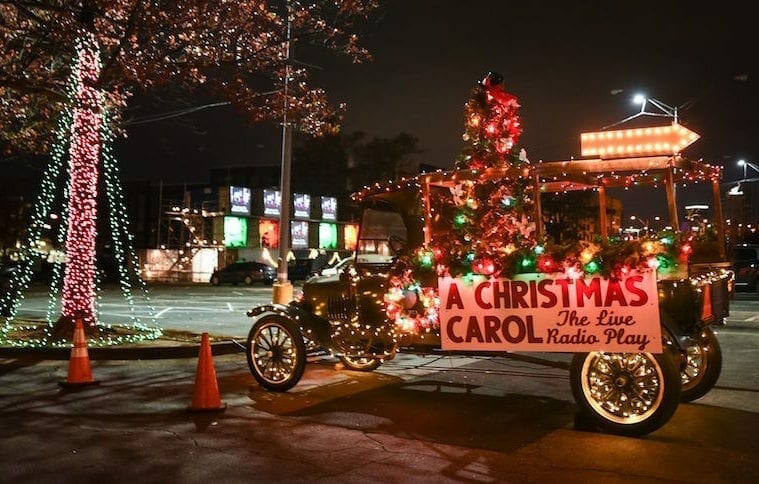 Review: Alliance’s outdoor “A Christmas Carol” gets an “A” for creative approach

Chances are a four–person, drive–in version of Charles Dickens’ A Christmas Carol wasn’t on many must–do lists this holiday. Yet with COVID-19 making in-person performing a challenge, theaters are having to adapt. The Alliance Theatre, after streaming several shows of late, found a new way to tell its annual tale of Ebenezer Scrooge and all his ghosts.

For now the lot at Georgia Avenue and Hank Aaron Drive doubles as a drive-in. Cars are parked at least one space apart so that theatergoers can watch outside or stretch their legs. Restrooms are available, and while there are no on–site concessions, nearby restaurants are available. Safety is a huge priority. Attendants check and swipe tickets and give attendees a program guide in an envelope (alongside additional goodies) and masks are required for anyone leaving their car. Audience members hear the performance through their radios. 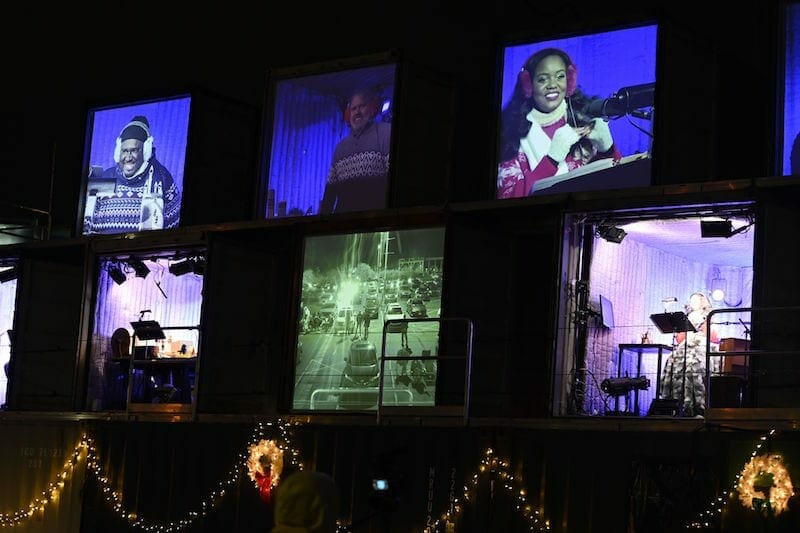 Brad Raymond (Scrooge) and Jeanette Illidge (the ghosts) are half the cast of “A Christmas Carol: The Live Radio Play.” (Photos by Greg Mooney)

The production is a lean adaptation of the classic story, with Jeremy Aggers, Jeanette Illidge and Brad Raymond doing all the acting and Stuart W. Gerber handling sound effects. Because it all happens in a parking lot, set (and costume) designer An-Lin Dauber chose to make it appropriate to the moment, rather than lavish. Performers sit in what look a bit like elaborate containers (almost 9 feet high and 9 feet wide) with oversized screens above them so the audience can see close-ups. Sometimes we see Gerber on-screen while another screen shows how he brings the sounds to life. It can be disconcerting.

A Christmas Carol: The Live Radio Play runs roughly 90 minutes and Illidge opens with Illidge asking patrons to listen to the story and use their imaginations. The players read the tale and bring it life. Gerber’s Victorian-era sounds and special effects are especially worthy of note.

It’s a welcome relief to see theater in person again and not on a screen. A lot of planning has gone into this Carol, but as an evening of theater, it’s only so-so. The actors do their work with conviction, with Raymond making a suitable Scrooge, the versatile Illidge voicing the ghosts and the always-great Aggers ably bringing most of the others to life. Yet it never feels large enough to be done as an outdoor, onstage production. It’s conceived cleverly but directed rather generically. Oddly, with all its boxed–in actors, it looks a bit like a Zoom reading, which might have worked just as well here. 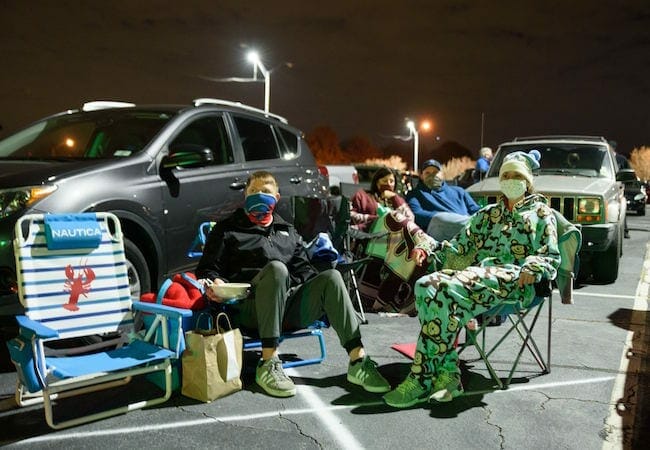 Some theatergoers dress for the occasion.

It’s as an Event that A Christmas Carol: The Live Radio Play succeeds more vividly. For many patrons, simply getting out of the house again is cause for  celebration. And this staging includes some welcome interaction with the theatergoers, who are asked to flash their headlights or toot their horns at various points of the evening (one lucky patron won doughnuts for being in a randomly chosen parking space). The actors take a break and talk to the audience and each other from time to time and on opening night, Illidge introduced the audience to an essential worker. Other nice touches include sing-along Christmas tunes. A medley of music (including Mariah Carey) closes the evening.

Other Atlanta companies are beginning to expand beyond streaming, with the likes of Aurora and Synchronicity theaters hosting limited in–person performances. Still, it might be awhile before theater as most of us know it returns. In the interim, there’s no need to “bah, humbug” the cheer that The Live Radio Play tries so hard to bring.