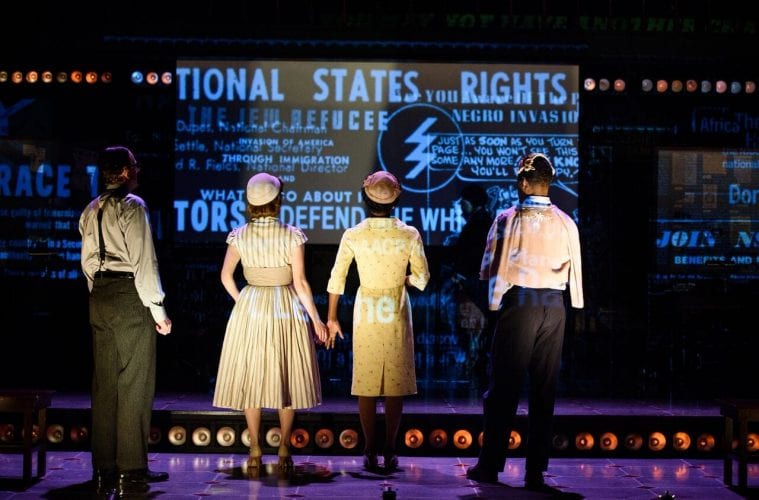 Review: The Alliance’s moving “Temple Bombing” shows the present is shaped by a cruel past

ArtsATL critics Andrew Alexander and Jim Farmer recently saw the Alliance Theatre’s riveting world premiere drama The Temple Bombing. They share their thoughts on the production, running through March 12, which is based on the bombing of Atlanta’s oldest synagogue in 1958.

Jim Farmer: Hello Andrew! I know we both caught The Temple Bombing recently.  It’s a new work, co-produced by New York’s Tectonic Theater Project, written and directed by Tectonic company member Jimmy Maize, that looks at that moment on October 12, 1958, when Atlanta’s oldest synagogue was attacked. It’s based on the award-winning book by Atlanta’s Melissa Fay Greene, and the mounting of the play celebrates the 150th anniversary of the Temple. What did you think of it?

Andrew Alexander: Hi, Jim. I’ll be curious to hear your thoughts as well. I loved the play. I have a few small points of criticism, and I’m generally wary of going overboard with superlatives, but I thought it was one of the best world premieres I’ve seen in Atlanta. I loved the documentary style of playwriting. The play is somewhat unusual in that the script, all the spoken narration and dialogue, was created from historical texts, interviews, court records, newspaper accounts, testimony and the like. That may sound like it could be dry and leaden, but I found it really fast and suspenseful. And very moving. Your thoughts?

Farmer: I enjoyed it and I am glad I saw it. I knew about the bombing, but this really gave me a lot of the details I was unfamiliar with. The play poured a lot into its 100-minute run time and introduced me to a lot of people who were vital to what went on. I thought the documentary-style approach worked. That said, I didn’t love it as much as you did, however. It brought a tremendous amount of material to the table but at times I felt it merely scratched the surface. I could have watched another hour and not been restless. What did you think of the concept of having a fairly small ensemble play so many characters?

Alexander: I liked it, and I think that’s one of the things that helped bring the show alive, giving it intimacy and energy. However, it does bring me to a point of criticism. The show is primarily set in 1950s Atlanta, though it does move backwards and forwards in time. The show uses a diverse ensemble and gender-blind and race-blind casting, which normally I’m a fan of. But here, I found it a little confusing since race and gender are actually significant elements of the narrative. Church congregations, newspaper staffs and so on were not really integrated in 1950s Atlanta, and roles for men and women were quite restrictive, so seeing them represented in a different way on stage — even though we’re meant to imagine the historical truth of the moment — could be confusing somehow. It didn’t jibe with the documentary approach, and there were a couple of moments when I was literally confused — I think the 10 actors play about 100 roles — in distinguishing who was who. What did you think? Did you like the ensemble approach? 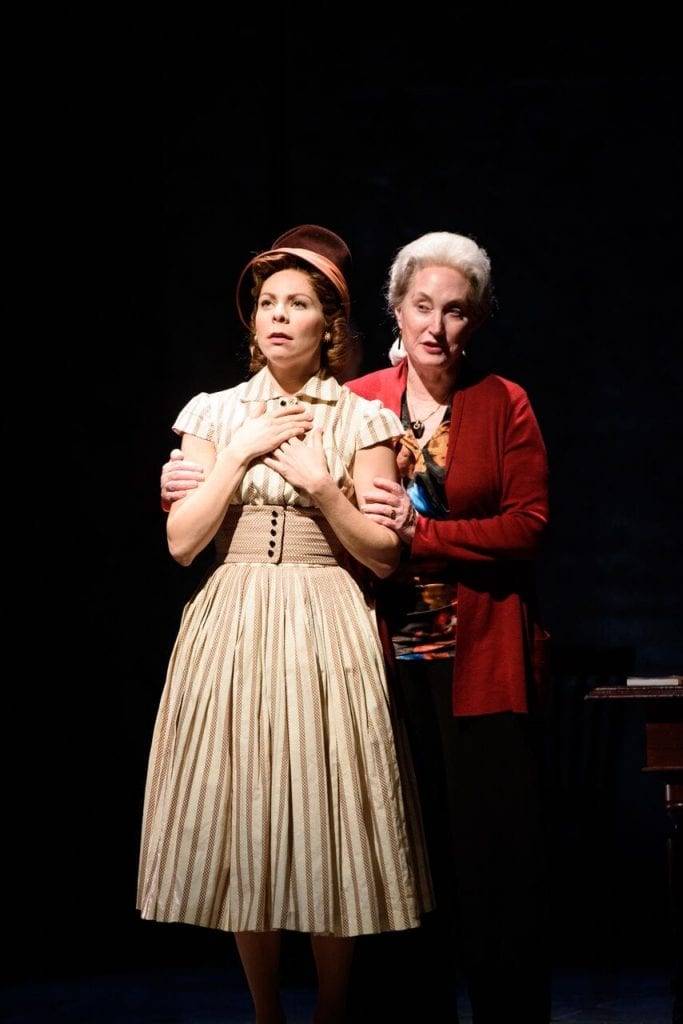 Caitlin O’Connell, right, deftly handles the role of the narrator.

Farmer: I was a confused at times too, at the revolving carousel of characters. That approach can work but here — as you said — it was hard to follow. I knew who the central characters were: Rabbi Jacob Rothschild and his wife Janice, accused bomber George Bright and lawyer Reuben Garland. But the rest of the cast portray so many various people it became somewhat jarring. It’s no fault of the performers — Amari Cheatom, Danielle Deadwyler, Ann Marie Gideon, Eric Mendenhall, Caitlin O’Connell, Lee Osorio, Ric Reitz, Justin Walker, Todd Weeks and Minka Wiltz — but a 100-minute play simply doesn’t have room for 100 characters.

Alexander: You said you felt you could have watched the show for another hour. What would you have liked to have seen in that hour? What elements of the narrative and characters did you feel needed to be fleshed out more?

Farmer: One of the challenges of adapting a dense book for the stage is determining what to bring forward and what there’s simply no room for. The story of what happened before and after the bombing involves a lot of people, and perspectives, but it’s just too much for just over an hour-and-a-half. I would have loved to hear more detail about some of the extraneous characters here, such as the reporters and synagogue members. Ironically, the same day I saw this, I was finishing ABC’s When We Rise and I had a similar reaction — terrific, fertile material, done admirably enough, but it would have been so much better if it didn’t tell so many concurrent stories in a condensed amount of time. A longer run time could have rounded out some of the here-one-moment-gone-the-next characters. What I did really respect about The Temple Bombing is how timely it felt, and how director Jimmy Maize shrewdly reveals that an issue such as racism is just as sadly relevant today. Did you feel that way? And I’m curious who in the ensemble stood out [for] you.

Alexander: Yes! That’s one of the things I loved about the show, how it really showed how the present is shaped by the past. It would actually be preferable to be able to say that this play is a period piece about a distant past that has little to do with what’s going on now, but sadly, we can all see that’s not the case. The past is never dead, it isn’t even past, as the famous quotation has it. I really felt it that night. I adored Caitlin O’Connell in the lead role of the rabbi’s wife, our narrator, Janice Rothschild. She acted as a charming, gracious guide to what could otherwise easily have become an overpopulated story. This was averted, I think, primarily thanks to her. And on opening night, the lovely Janice Rothschild was right there in the audience! For me, it was all truly unforgettable. Sometimes I have trouble remembering the shows I saw six months ago, but this is one I know I’ll remember for ages. The cast was pretty strong all the way around, and it’s worth noting the production in general — the set and lighting and sound design — were all top notch, as well. Which cast members stood out for you?

Farmer: O’Connell was wonderful. She becomes the central focus of the work; her warmth smooths over some of the show’s bumpier aspects. I also really took to Ric Reitz as lawyer Reuben Garland. His courtroom antics and maneuvering are quite lively — giving the drama some needed lighter moments — and his scenes with O’Connell are the best in the play. Oddly, though, Todd Weeks’ take on Rabbi Jacob Rothschild never really came to life for me.

One of the more interesting aspects of The Temple Bombing is how the times and its characters were influenced by the case of Leo Frank earlier, who was a member of the Temple. The depiction of the bombing is a chilling, theatrical moment as is the initial threat against the Rothschild home. All in all, I was high on this, despite it feeling a bit Cliff Notes-y at times, but it did prompt me to go home and do some more research. If The Temple Bombing, in its next incarnation, can keep its history and mood intact and find a way to simplify its character list — or either flesh out its supplemental ones — it can be a major work. Do you see this traveling to other cities?

Alexander: I wonder. I know that was part of the plan, to make a play that would have a life beyond this production, but the results seem so very Atlanta, so particular to this place and this community. Atlanta is the subject, but also the audience, which is what makes the Alliance production so special. I can’t guess whether audiences outside the city will respond, but I’ll be curious to watch what happens. On a totally different track, I was surprised to be reminded in Susan Booth’s pre-curtain remarks that this will be among the last shows we’ll see in the old Alliance. Next year, the company packs up and hits the road to produce its shows in various venues around town while the theater-space itself gets a much-needed reboot. All in all, a lovely send-off in my opinion. Any final thoughts on Temple?

Farmer: At least they are leaving the old space on a high with this and Troubadour, whose music I’m still humming.

Alexander: Ha! I remember asking in the lobby at Troubadour intermission if the soundtrack was available. Hopefully, that’s one of the improvements they’ll be working on.