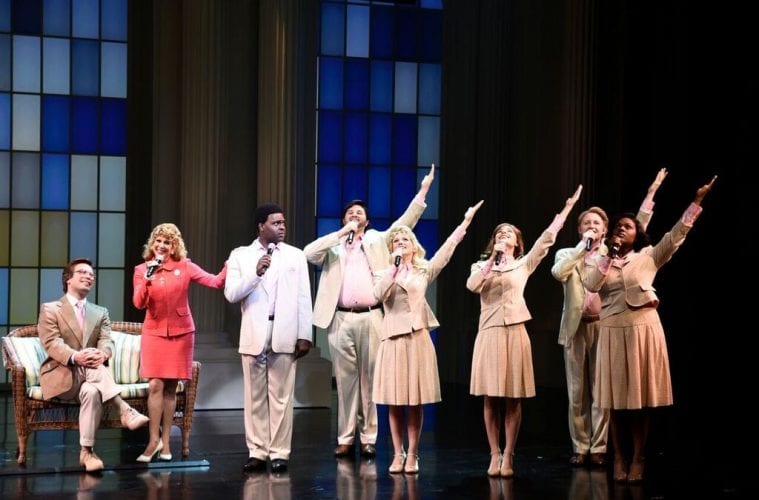 Now having its world premiere at the Alliance Theatre, Born for This: The BeBe Winans Story is very much a family affair. Charting the journey of the Grammy Award-winning recording artist and his tight clan (including his sister CeCe), it’s written by BeBe Winans himself, along with Charles Randolph-Wright, who directs. Winans’ own nephew Juan and his niece Deborah Joy star as BeBe and CeCe, respectively. They may all know the inside-outs of their own story but, unfortunately, this collaborative effort doesn’t make for a terribly satisfying night of musical theater.

Running through May 15, Born for This: The BeBe Winans Story has some isolated moments of greatness but not enough of a narrative to bring it all together.

Growing up in Detroit with a religious mother and father (Milton Craig Nealy as Pop and Nita Whitaker as Mom) as two of 10 siblings, BeBe and CeCe watch as their older brothers — Ronald (Brad Raymond), Marvin (Michael Stiggers), Michael (Dyllon Burnside) and Carvin (Desmond Sean Ellington) — become established performers as part of the Winans Brothers. Yet their moment is soon to come — they are plucked to be part of the Praise the Lord (PTL) Club run by Jim Bakker (Chaz Pofahl) and his make-up heavy wife Tammy Faye (Kirsten Wyatt).

The two teenagers become part of the Bakker family despite the fact that they are two of the few African Americans around at the station. Jim and Tammy take some heat for adding them — the production doesn’t skimp on the issue of racism — but as the Bakkers become aware of the talent and following of BeBe and CeCe, they change the kids from ensemble players to stars of the show, watching as they record a version of “Up Where We Belong” that reaches the masses. Eventually, though, the brother and sister have to determine whether to stay or move on.

The first 20 minutes here are surprisingly stiff. Only when the kids go to PTL does it pick up. Some of the scenes at PTL are funny and garishly entertaining as the Winans try to fit in. William Ivey Long’s PTL costumes for Tammy Faye and the singers are often amusing.

Yet those scenes also expose the real problem with the production. For a musical about the Winans’ career, it spends far too long with the Bakkers. What’s missing is the sense of how the Winans’ career took off. How they move forward with their professional lives is lazily depicted — and who they are as people is especially threadbare too, especially BeBe.

Many of the characters are thinly drawn. Whitney Houston (played by Kiandra Richardson) materializes from nowhere in Act II and helps the Winans’ career. The family connection to her is never really explained. The Houston character records with them, buys them new duds, sings a show-stopping song (“Applause”) and then practically disappears.

From a singing perspective, this is a rich production with some tremendous voices. From time to time, a performer comes on and belts out a memorable number but it can’t compensate for what is missing. Overall, BeBe Winans’ score, with more than two gospel and pop dozen numbers, is a touch forgettable.

For the most part, Wyatt creates a character out of Tammy Faye instead of a caricature. The actress has a wicked sense of humor, as well. It’s too bad, though, that Winans and Randolph-Wright reduce her to almost nonstop crying in the second act. Pofahl fares a bit better overall and has a revealing scene with BeBe after their lives have changed. Yet even when these two characters become broad, they are infinitely more interesting than the Winans themselves.

Both Mom and Pop have a wonderful song. Whitaker’s ‘“Seventh Son” is a poignant highlight while Nealy’s “I Got a New Home” is a showcase for the performer. It adds little to the story but it’s a memorable, toe-tapping piece of musical theater. Like Deborah Joy Winans as CeCe, though, these two have to coast by on vocal range and charisma more than character detail.

In the end, perhaps most unforgivably, the musical really shortchanges its lead character. Juan Winans is a passable actor and terrific showman who can command a stage but he never develops into a fully dimensional character. By the end of the show, we know little about him, save for the jealousy he shows at his sister’s marriage and his own inner battle with how to proceed with his R&B career and life. Said battle is more internal than external here. The show’s desire to split its time between BeBe’s professional and personal life is commendable, but neither proves to be compelling.

Almost every year, the Alliance hosts a world premiere musical. Last year’s Tuck Everlasting, ironically, is bowing now in New York. This show is a collaboration with Washington D.C.’s Arena Stage. It’s been a strong year for Atlanta musicals, making this production even more disappointing.

If Born for This is going to catapult to Broadway it needs work — and perhaps someone outside the family — to whip it into shape.