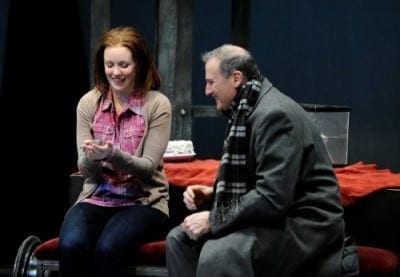 Jeff (David de Vries) is an alcoholic. But when he’s thinking of ways to get out from under his addiction and win back his estranged daughter, he’s a man with a plan, a smooth operator with the perfect sports analogy at the ready for this comeback kid.

Key details set just the right note for the kind of guy Jeff represents: he’s the sports anchor at a Minneapolis TV station, and he wears the demi-celebrity of that job like a beauty queen in a mink coat, his snout raised high in the air. His cockiness isn’t helped by the alcohol that also turns him into a loud, braying jerk who shoves his daughter aside even as he tells her he just wants to help. You want to hate Jeff, but you can’t.

It is testament to 29-year-old playwright David Mitchell Robinson’s nimble gifts in “Carapace,” at the Alliance Theatre’s Hertz Stage through March 6 — and de Vries’ balance in Jeff’s tightrope walk between jerk and pitiable disaster — that we bond to Jeff despite his distinctly flawed and occasionally distasteful personality. We are drawn to him because — at least on the theater stage, and perhaps occasionally in real life too — broken, damaged, aching-to-change people are like butter to Paula Deen: intoxicating. “Carapace” is the winner of the 2010 Kendeda Graduate Playwriting Competition, which helps young graduate school playwrights make the leap into the professional ranks. It’s the seventh winner of the annual award inaugurated in 2003, a legacy that will continue at the Alliance this year when it presents “Spoon Lake Blues” by Kendeda finalist Josh Tobiessen April 1-24, the first instance of an alum of the awards returning to the Alliance stage. (Photos by Greg Mooney.)

In “Carapace,” Margo (Bethany Anne Lind) is Jeff’s daughter, presented in flashbacks as a socially paralyzed teenager with a stutter seemingly induced by dad’s disappointments. Jeff is convinced that, with a little assistance and tough love, he can help Margo through the tribulations of high school, including her class presentation about the tortoise.

But his commuter mug surreptitiously filled with Maker’s Mark means that nearly every well-laid plan Jeff sets out is booby-trapped. After being ignored, forgotten and goaded too many times by Jeff’s many betrayals, Margo finally announces her separation from her father. “Carapace” opens years later, on Margo’s 23rd birthday.

Jeff has hatched an elaborate, and again Maker’s Mark-fueled, plan to reunite with her by giving her a terrarium and a tortoise, which he sees as the gateway toward reconciliation. But his bourbon high has somehow clouded his vision to the “symbolism” that the tank is cracked and broken and contains not a tortoise but an ordinary turtle. The play feels guided by a cinematic consciousness, dipping from present to past and back again; incorporating little indie-film evocative “clips” where Jeff engages with characters who block his progress; and occasionally using a projected image of a map or a spotlight to explore some tangent of the story as the playwright pursues the riddle of whether Jeff and Margo will ever reunite. There is every reason to believe, from the number of blockages put in his way, that Jeff doesn’t stand a chance. Robinson throws more obstacles in his way than a Greek myth or the plotline of “Scott Pilgrim vs. the World,” a succession of slackers and the occasional stand-up guy: a stoner ex-brother-in-law Peter (Joe Knezevich); the recovering addict pet store clerk Kyle (Paul Hester), who sells Jeff a turtle; and his grown-up daughter’s protective boyfriend Brian (Tony Larkin). It’s the men and boys in Robinson’s story who tend to call Jeff on his nonsense and run interference with his self-absorbed internal monologue. Rounding out this quartet is Ted (Mark Kincaid), also a lapsed alcoholic and the loudmouth drinking buddy who somehow goads Jeff into reuniting with Margo.

Set in Minneapolis in 2007, Robinson’s sharp, often incredibly funny drama, wise to the damage that families can contain, contains a parallel track running next to the story of Jeff and Margo. It’s the collapse of the I-35 Mississippi River bridge in Minneapolis, which killed 13 people and injured hundreds more and seems to embody, for the playwright, both the precariousness of the world and the hard-to-span divide between father and daughter — the bridge collapse splits the city, and also Margo and Jeff, in two. But the bridge metaphor tends to come off as something clumsily wedged into the story to add depth and gravitas. With Robinson’s handle on character and wisenheimer wit, it’s a distraction he doesn’t need.