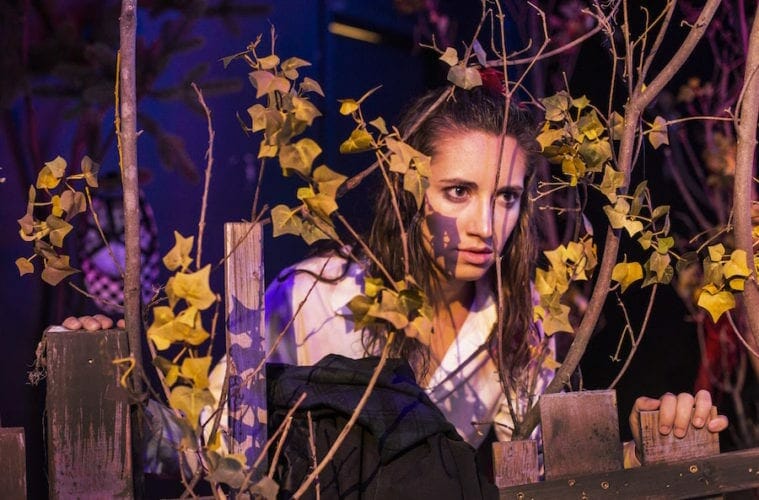 Some girls just wanna have wicked fun. So it is with playwright Erica Schmidt’s all-female Mac | Beth, her darkly entertaining, contemporary adaptation of Shakespeare’s Scottish tragedy, at Synchronicity Theatre in Midtown through October 27.

Under the well-paced direction of Jennifer Alice Acker, the brisk 90-minute production proves engaging from the start. Wearing private-school blazers, blouses and plaid skirts, the girls look like well-behaved students. But school’s rules are done for the day, and these fangirls of the Bard escape to a secluded field, where there is no judgment. They can do, and be, whatever they want. There, amid old tires, a rusting wheelbarrow and a rotting sofa, their cult-like Macbeth club meets to perform the violent play, with its omniscient witches, ambition-obsessed royals and murderous mayhem. 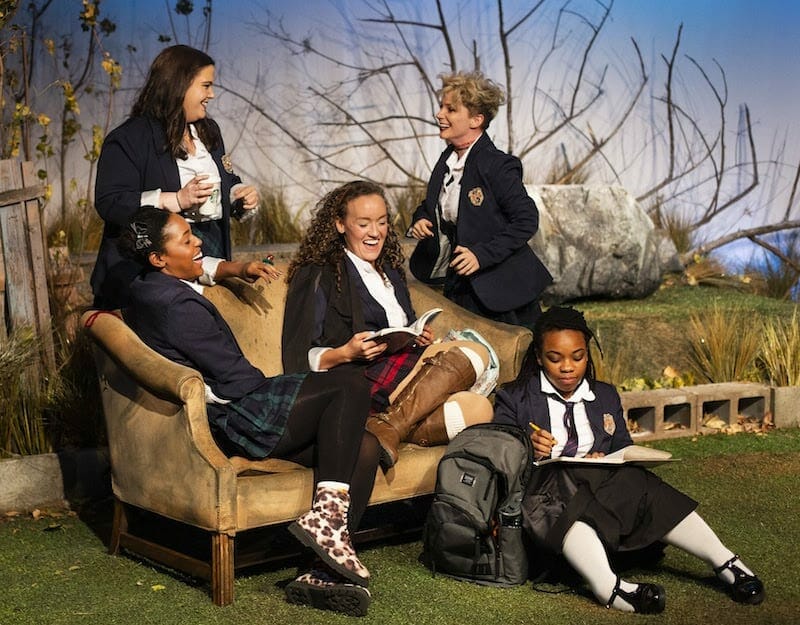 Seven Atlanta actors play 17 characters and make this Macbeth their own. They don’t try to look or sound masculine in the traditional male roles. They don’t change out of their school uniforms. They don’t truck in a load of props. Instead, they raid their backpacks or the debris around them. DIY time.

Together, Schmidt’s script and Acker’s staging meld death-dealing drama (Banquo’s demise is shocking) and delightful playfulness (girls gotta have their smartphones). In this cozy theater, their exuberant energy is magnified. Savage or sassy, these high-schoolers display a kick-ass attitude. They are Shakespeare’s Mean Girls. His 400-year-old play feels bracingly alive and modern.

Nearly all of the dialogue is borrowed from Macbeth, which was Shakespeare’s shortest and fastest-moving tragedy. Schmidt’s play-within-a-play concept works like a haunting dream. She has preserved his gripping story of a trio of Witches who prophesy that Macbeth will someday become king of Scotland. Macbeth is tempted to make the prediction come true. Lady Macbeth goes for it, goading her husband into committing regicide and stealing the throne. The body count climbs. 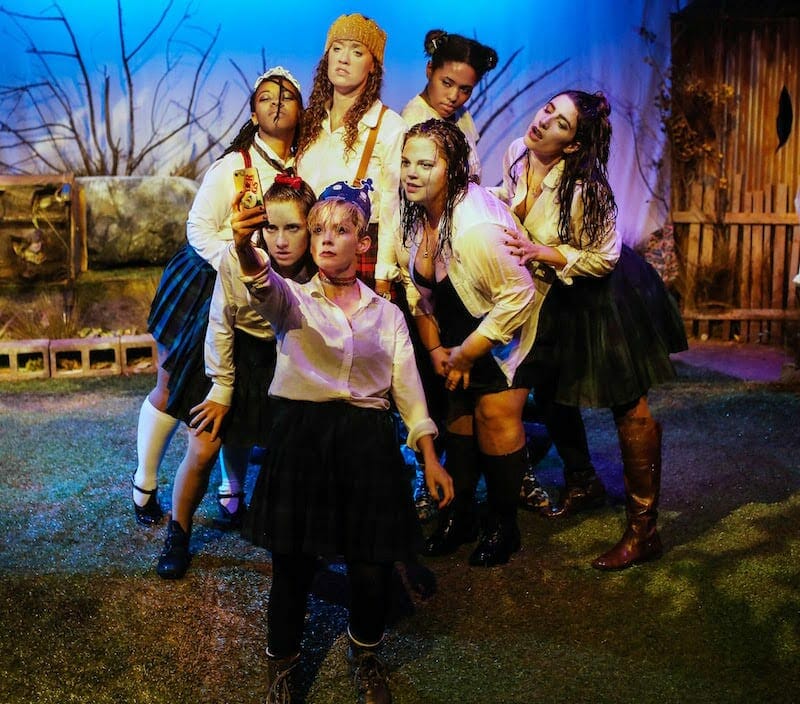 The impressionable schoolgirls don’t mind the killing spree one bit. They revel in donning a stretchy-knit crown and a rhinestone tiara. Soon, they are behaving as if they’re as empowered as the Macbeths, dangerously blurring the line between fantasy and reality. Inhibitions fade. Sexual undercurrents spark.

As Mac | Beth darkens, the schoolgirls turn brutally physical, hurling themselves at each other (credit to fight director Jake Guinn). Play-acting veers toward stunning violence, and fantasy appears to have truly crashed into reality. Throughout, Ash Anderson as Banquo demonstrates total commitment to the performance. Superb nonverbal work.

It’s always interesting to hear women speak the words of Shakespeare’s men. When Emily Nedvidek’s Macbeth worries about her plan to kill the king, she utters poetry: “Stars, hide your fires! Let not light see my black and deep desires!” On opening night, Nedvidek still seemed to be exploring the depths of Macbeth’s guilt and paranoia, but these lines sounded new, as if I were hearing them for the first time.

As seen on opening night, the lovely Lady Macbeth (Antonia LaChé) appears rather friendly as the coldhearted wife who mocks Macbeth’s manhood and bullies him into stabbing Duncan. Anna Williford’s avenging hero, Macduff, displays a seriousness of purpose that gives her presence the necessary dramatic heft. Shannon McCarren — cast as a Witch and in three small parts — is a vivacious scene-stealer. Jasmine Thomas and Abby Holland, meanwhile, flow in and out of nine roles. 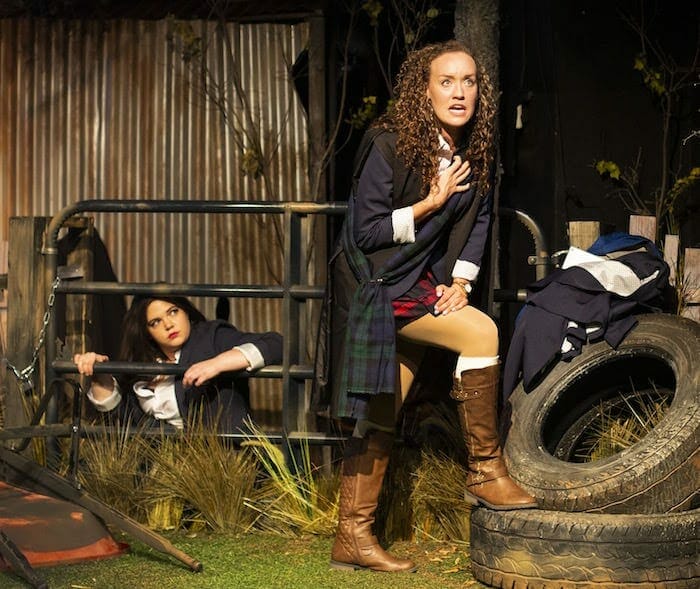 Sometimes, various voices hit the same pitch and volume for an extended period, especially early on. Storytelling is diminished in a rush of words. But after the slaughter begins, vocal variety becomes more distinct for each character.

The schoolgirls’ outdoor theatrical production has an intentionally makeshift ambience. They perform in an equally makeshift-looking field by set designer Kristina Adler. The action seems to take place on an overly bright afternoon, but these murders are hardly sunny events. So, perhaps cloud cover, with an assist from lighting designer Jsalya Martin, would keep the set from looking distractingly unnatural. Costume designer Cole Spivia’s school uniforms are properly preppy.

In resetting Shakespeare’s Scottish play in the present day, Schmidt has responded to news headlines. “The tartan print is a nod to Scotland but we are in America,” she has written, “where school violence is so common as to be horrifyingly banal.”

Horrifying, indeed. Mac | Beth was also inspired, in part, by 2014’s “Slender Man stabbing,” in which two 12-year-old Wisconsin girls lured a classmate into the woods and stabbed her 19 times, nearly killing her. Slender Man is a creepy fictional online entity. The attackers thought their ritual assault would let them become his “proxies.” The schoolgirls’ fantasy led to bloody reality.

So, as one of Synchronicity’s Witches says, “Something wicked this way comes.”