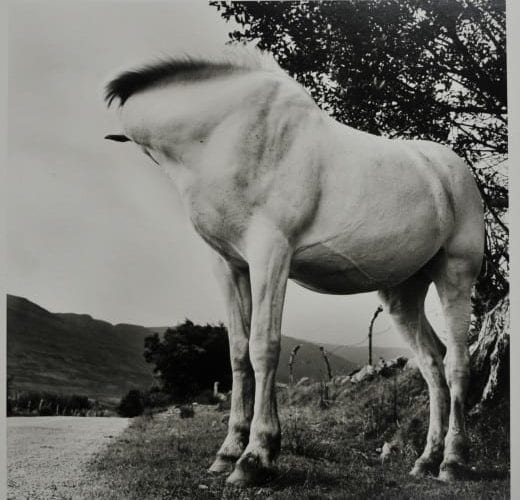 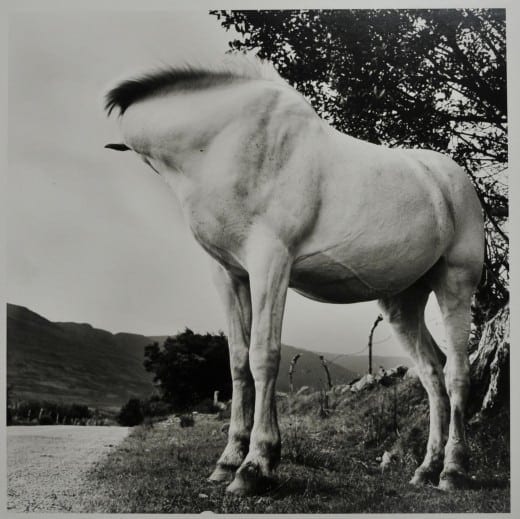 The Waters and the Wild: Alen MacWeeney Photographs of Ireland, at the Michael C. Carlos Museum through January 3, is the lovely and illuminating result of the gift of two portfolios of MacWeeney’s photography and the work of curator Andi McKenzie and Emory Irish studies professor Geraldine Higgins in pairing them with selections from the William Butler Yeats Collection at Emory’s Manuscript, Archives, and Rare Book Library (MARBL).

Adroit and timely: McKenzie, Assistant Curator of Works on Paper, says she used on the occasion of the 150th anniversary of the Yeats’ birth as a “happy excuse to get [the photos] in the gallery quickly.”

As a young man in the early 1960s, MacWeeney left his native Dublin for New York, where he worked over several years as an assistant to photographer Richard Avedon. He returned to what he called “the Ireland of my imagination” in the summer of 1965 on the occasion of the centenary of the birth of the Irish poet, with the vision of a short-term project inspired by Yeats’ poetry and a desire to explore the people, places and settings that inhabited his words.

MacWeeney drew meaning for his photographs from the lines of Yeats’ poems, and in one of the two portfolios in the gallery, gave meaning to his photographs by pairing them with lines selected from Easter, 1916, Yeats’ most powerful political poem.

Yeats as a younger poet was out of step with the increasing nationalism of his country, preferring to dwell on Ireland’s past rather than the complicated possibilities for future independence from Britain, despite his love for the beguiling Maud Gonne, one of the rebellion’s staunchest supporters.

But after the Easter Rebellion, when the British swiftly and ruthlessly suppressed the Irish Nationalists, Yeats wrote that [a]ll changed, changed utterly: /A terrible beauty is born.

The terrible beauty of that poem’s most famous phrase is the birth of a new and fiercer Irish nationalism, about which Yeats was ambivalent, but whose martyrs he celebrated in the last lines of the poem.

None of MacWeeney’s images seems political to me. Rather, the nexus of the two Irishmen lies in their shared belief in the power of their art to preserve collective memory. MacWeeney’s poignant black-and-white photographs of faces (both living and dead) and places (city streets and pastoral county scenes) speak uniquely of Ireland.

Few are more luminous than White Horse, Donegal, a portrait of a majestic, ethereally white horse standing beside a country lane unaware of, or disinterested in, MacWeeney’s camera. The dead flies that litter a sun-slanted window sill in Flies in the Window, Castletown House, another highlight, rhyme perfectly with the black cows dotting the pasture beyond it.  The former freezes movement and the latter captures a moment of stillness. Both, though, are less terrible beauty than just plain beauty. 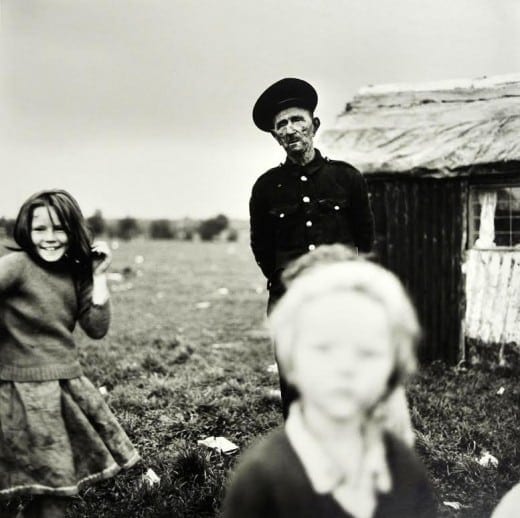 The opening lines of “Easter, 1916,” — I have met them at close of day/Coming with vivid faces — which MacWeeney invoked for the first of these two portfolios, seem even better suited to his second. These photographs, silver gelatin prints evolved from his 1965 work on the Yeats’ project after he discovered an encampment of “tinkers” or “gypsies.” These Irish Travellers, an indigenous nomadic group, were to become his subject for the next six years and beyond.

The hardened faces of MacWeeney’s Irish Travellers evoke those of Walker Evans’ Depression-era tenant farmers in Let Us Now Praise Famous Men. Like Evans’ subjects, MacWeeney’s stare directly and earnestly into the camera, radiant and just as they are, but elevated by the same mysterious allure with which Evans ennobled his subjects.

And like Evans, MacWeeney was accepted into his subjects’ private world. Despite their extreme poverty, or perhaps because of it, he found them “breathtakingly beautiful, [possessed of]… a raw dignity and fearlessness.” His respect for them shows in the work.

See the photographs first and then consider the wide-ranging contents of the case in the center of the room, which humanize Yeats, whom Gonne, his famously unrequited love, told that the world would thank her for not marrying him. His anguish and heartbreak resulted in the most poignant love poetry of the 20th century.

Included here are some of their correspondence, a lithograph of Yeats as a young man, a copy of Easter, 1916 (number four of 25 printed for “distribution among his friends”) and a touching photograph of the poet as an old man sitting alone in front of a Dublin café.