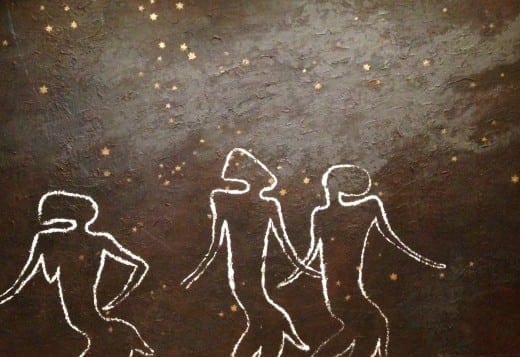 African Cosmos: Stellar Arts, at the Michael C. Carlos Museum through June 21, explores the legacy of African cultural astronomy and its intersection with traditional and contemporary African arts. What could have been a mere survey, considering the expanse of time and culture required to mine the arts of an entire continent, proves to be an intelligent and exhilarating look at man’s relationship with the celestial from ancient times to the present.

Organized by the Smithsonian’s National Museum of African Art, the exhibit is part of Emory University’s Creation Stories project, a collaboration with the Atlanta Symphony Orchestra and the Georgia Humanities Council, which explores how questions of origin, creation and intent have served as a catalyst for human thought and creativity.

It is fitting, then, that much of African Cosmos explores how the sun, moon and stars informed and inspired creation stories as man worked out an understanding of the celestial and his place in it.

But this is an exhibit that also illuminates the ways that contemporary artists from Africa continue to draw on the cosmos for inspiration.

Positioned at the entrance, Chasing Light (2010), a simulation of the aurora borealis by South African artist Marcus Neustetter, dispels any notion that this is to be a cultural survey of ancient art. Neon green light skitters across a black wall like neural synaptic movement, more microscopic than cosmic, against an aural background of static and reverb that sounds like so much cosmic noise.

While in Norway on a project, Neustetter had hopes of seeing this celestial event but was thwarted by heavy clouds. Using a high-frequency recorder, he settled for capturing the sound of what he could not see — the aurora-causing electromagnetic fluctuations hitting the earth’s atmosphere. He then created his own visual effects in the studio with lasers shone on a tray of water vibrating to the sound.

Two videos by William Kentridge, another South African, provide a different contemporary take on the cosmos. Day for Night and Journey to the Moon, both black-and-white from 2003, link the artist’s studio practice with a conceptual journey through space. In Journey — his homage to Georges Méliès’ 1902 A Trip to the Moon — Kentridge’s nude wife is an elusive muse and his moon, who, unlike that of Méliès, is benevolent.

In Day for Night, small white particles fizz across a chalkboard-gray surface in a continuum of movement that mimics human perception of stars in the night sky, but (spoiler alert!) prove to be ants carrying sugar on their backs.

Our own continuum of movement in the galleries takes us from the contemporary expressions of Neustetter and Kentridge to the traditional practice of the Dogon, whose Mali landscape of steep cliffs inspired a belief in the direct connection between earth and sky. Their mostly black-and-white ladder-like kanaga masks, stark and powerful against an orange wall, appear at funerals to lead the soul of the deceased to the afterlife and reflect a desire to reach for and connect to the heavens. Figures in metal or encrusted wood portray the Dogon view of the world as two disks separated by a central axis.

Similar beliefs in earth/sky connection are reflected in the Yoruban people of Nigeria, whose works are represented in a separate room. Their cosmology is conceptualized in the lidded vessels, or calabashes, made from gourd or wood. The top symbolizes heaven/sky and the spirit world, and the bottom stands in for the physical world of earth deities and humans. Shango is the orisha, or conduit between man and the divine, of thunder and lightning. He is well represented in Yoruban art, and for good reason: thunderstorms in this area of West Africa are legendary.

One of the organizational strengths of this exhibition is the segregation of objects into different groups determined by the source of influence. The Dogon’s earth/sky connection, for instance, forms one section; the Yoruban another. Still another is dedicated to lunar arts and the influence of the moon on the Tabwa and Luba peoples of the Democratic Republic of the Congo, who believed that the light of the moon symbolized the special insight that occurs during spirit possession. One standout is the 19th-century Luba female figure carved from wood and bearing a quartz crystal in her crown. For the Luba, quartz crystals were associated with the sacred authority of the moon. The 20th-century Tabwa basket used in divination and woven in the triangular balamwezi pattern representing the rising of the new moon is another.

The solar arts are represented in a section dedicated to the art of the ancient Egyptians. Scarabs in the form of dung beetles push the sun disk across the sky, and baboons are venerated on a frieze fragment as first-up-in-the-morning greeters of the dawn.

An ancient coffin lid, painted with the face of a pharaoh and the body of a scarab, draws you into the room dedicated to the stellar arts of a variety of cultures — ancient Egyptian, modern South African and recent Ghanaian. A large untitled painting (1989–90) by South African artist Gavin Jantjes dominates the room. Three chalky white figures, in the style of South Africa’s ancient rock paintings, dance across a thickly painted black ground gazing in seeming wonder at a starry sky. Jantjes references a myth of the creation of the Milky Way and sets the historic reference of deep time.

For ancient Egyptians, the star was a five-pointed hieroglyph that represented the afterlife and the duat, or the underworld. Don’t miss the fragment featuring a relief of the goddess Sopdet whom the Egyptians associated with Sirius, the brightest star in the night sky. Although it dates from 600 BCE, it looks as fresh as an imprint left by a starfish just plucked from a sandy beach.

Deep Survey — Blue Shift/Red Shift (2009) relies on science as an entry point, but the result is pure wonder. This multimedia piece is a collaboration between computational scientist Miguel Aragon-Calvo and Cal Tech professor Nick Scoville, who leads the COSMOS project, a survey of the universe.

In it, a simulated video using only two square degrees of this vast survey is accompanied by a soundtrack by South African artist Karel Nel. He recorded and altered nocturnal sounds of the crickets heard outside his studio window to mesmerizing, cosmic effect. It is a fine thought to ponder the idea that he considers their sounds as the aural equivalent of deep space.

Despite what we have learned about the cosmos, stars in the night sky still hold the power to captivate with the elusive, the vast and the unknowable

African Cosmos: Stellar Arts is a show of work that does what the best exhibits should do. By limiting the myriad, and potentially numbing, ways of examining the arts of an entire continent to an exploration of African concepts of the cosmos, it challenges and expands our understanding of Africa’s contribution to a global intellectual history, of ourselves and of how much we share as common explorers of the cosmos.