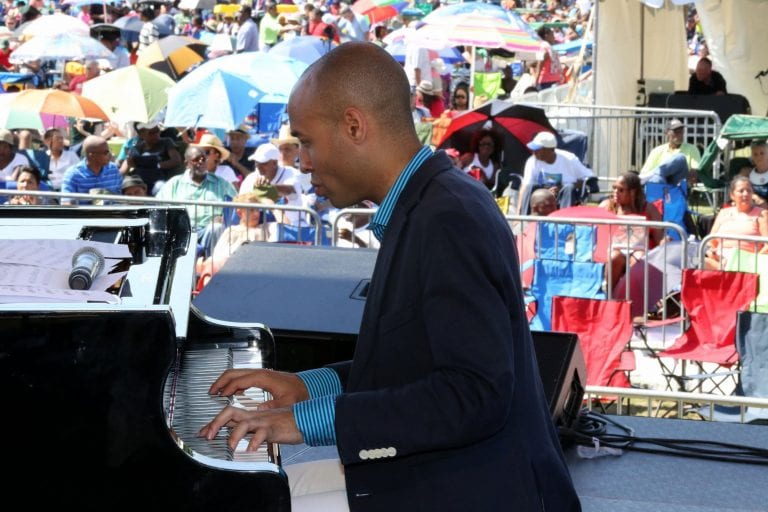 Ambrose was one of the few jazz artists to play the main stage. (Photos by Robb. D. Cohen)

Atlanta Jazz Festival review: For aficionados, event organizers hid the best on a side stage

Less than a week after appearing on the International Stage at the 36th annual Atlanta Jazz Festival, during Memorial Day weekend in Piedmont Park, saxophonist Uri Gurvich found himself on a similar stage, in a similar setting, nearly 1,200 miles north.

He played Saturday afternoon in Burlington, Vermont, where I found myself covering that city’s 30th jazz festival, a collection of free afternoon concerts and paid headlining performances in a bucolic setting. As in his Atlanta appearance, Gurvich played jazz tinged by world music, backed by the excellent drummer Francisco Mela, for an eager group of listeners.

The links between the festivals run deeper than Gurvich. Both have a long history of presenting top-notch jazz, one that now is a bit obscured. In Atlanta, most jazz aficionados found what they were searching for not on the Main Stage in the meadow of Piedmont Park, but at the smaller stage by the pool on the other side of the green space. This seemed to be by design, as most festival-goers spent the entire day camped out in front of the Main Stage with their families, simply enjoying the long weekend. Music, on the whole, served a background role to reveling, eating and lounging under a legion of mostly monstrous umbrellas.

There was some jazz on the Main Stage, though it was mostly reserved for rhythm-and-blues acts. Pianist Aaron Diehl’s fantastic quartet, beefed up by festival veteran Warren Wolf on vibraphone, and trumpeter Ambrose Akinmusire held court in the main space on Saturday. Guitarist Jacob Deaton and his band, filled with local talent, played the Main Stage on Sunday and were one of the last jazz acts of the weekend. In such a highly trafficked spot, Deaton and his band soared. The group, which included drummer Justin Chesarek, pianist Nick Rosen, saxophonist Akeem Marable and bassist Craig Shaw, even showed its cool in the face of an overzealous listener who stood at the side of the stage banging away very audibly on a tambourine for most of the performance.

Most of the key acts, however, were relegated to the smaller International Stage — one of the best-kept secrets of the festival. But despite that stage being a significant walk from the Main Stage — so removed, in fact, that it seemed unlikely that officials planned on most of the audience catching all the acts — it wasn’t far enough to mitigate a bit of noise pollution. Listeners at the smaller stage could hear muddled noise from the larger one, which made emotional ballad performances on the smaller stage difficult to achieve. Thrilling concerts by saxophonist Rudresh Mahanthappa, who turned in the best set of the festival, and audience favorite Miguel Zenon fell prey, a bit, to this noise contamination.

Among Saturday’s slew of International Stage artists, Cecile McLorin Salvant presented the best concert, a thoroughly enjoyable, and at times riveting, set backed by Diehl and his rhythm section of bassist Paul Sikivie and drummer Rodney Green. She sang through a number of tunes on her new record, sounding at times like a mixture of Billie Holiday, Ella Fitzgerald and Sarah Vaughan, with enough of her own style to hold her high above charges of parroting them.

As a performer, McLorin Salvant seems to like having a bit of fun, which comes across in her delivery and  repertoire. She milked notes on the classic “Moody’s Mood for Love,” accentuating the low end of her range, and gave the audience a bit of Broadway with the light “Stepsister’s Lament” from Rodgers and Hammerstein’s “Cinderella.” Backed by stride piano, her humor came to the front on “You’ve Got to Give Me Some,” a highly suggestive plea for romance.

All the jazz artists appeared under the slogan “Generation Next” (way to borrow from a ‘90s Pepsi campaign, Atlanta), and hopefully the festival organizers will be able to keep this level of rising jazz stars returning for years to come. Having a relatively few huge jazz stars on the Main Stage, surrounded by people carrying on and having a good time, matters less than filling the smaller, out-of-the-way venue with quality jazz.