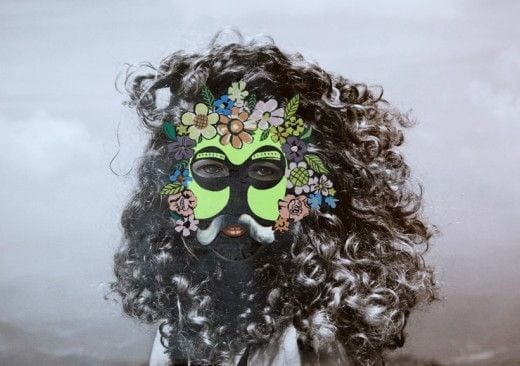 Marcus Kenney‘s exhibition “Underneath the Hope,” at Marcia Wood Gallery through October 20, is a colorful roux of Southern Gothic imagery. In a strong collection of avant-garde photography, paintings, collage and assemblage pieces, he uses both humor and the macabre to examine social issues of the American South. To be clear, Kenney’s work does not embody what was originally classified as Southern Gothic, but rather what Southern Gothic has become. While the strategy of using disturbing characters or themes to highlight social injustices and themes of poverty, alienation, racism and corruption — as in the vein of Flannery O’Connor and her peers — is evident, Kenney has overlaid those concerns with the textures and trappings of modern commerciality, environmental anxieties and cross-cultural references.

It is the success of Kenney’s vision that he can pull from so many material sources and create a cohesive body of work. Recurring imagery such as costuming, masks and the transformation of everyday things into fetishistic objects bring questions of identity and culture into play. It is also evident, though, that as he taps into these themes, he does so with a keen sense of wit and a hint of provocation.

Some of Kenney’s most thought-provoking pieces are created from reclaimed taxidermy. “Sebastian,” “Anna Christ” and “Saint Laree Ruzzell” utilize a bobcat, coyote and mounted deer head, respectively, as the bases for his elaborate transformations. The animals are trussed, bound and enrobed in a variety of materials — rope, fabric, feathers, bone, shell, metal, plastic, currency — which render them as entirely different objects. While traditional taxidermy endeavors to make the animals appear as natural as possible, Kenney’s work highlights the artificiality of their exploitation.

His quirky, kitschy and sometimes tribalistic-looking treatments seem to be a deliberate desecration of the sacrosanct nature of these once-living creatures — a testament to the many ways in which animals and nature are negatively affected by human manipulation. And yet, underneath this critique, there lies a sense of humor, and even some sense of whimsy, in the decoration of the animals. Like the masked humans in the artist’s other works, their transformations have granted them some odd totemic powers, some strange kind of transcendence.

The Savannah artist makes other assemblage pieces from common objects, some embellished to the point of obscuring the original object completely. The jugs and jar in the series “Geppeto’s Jug” and “A Special Thank You” are coated with some of the standard items in Kenney’s very diverse toolbox, and his keen eye in terms of color and texture brings these disparate elements together in a way that extracts harmony from chaos, creating modern talismans that resonate with a primal quality: do-it-yourself voodoo fetish objects.

He has also incorporated his first love, photography, into this show, blending the images seamlessly with his trademark assemblage and collage pieces. His arresting black-and-white images add dimension and a sense of a back story to the collection; they offer an eerie realm wherein his tribalistic talismans seem to have been born. Four of the seven photographs on view are not manipulated but still offer a dreamlike, surrealistic quality not unlike Sally Mann‘s photography of her children. In “Benny in the Fire” and “Cedar Lake,” a lone child negotiates an essential element; in the first a fire pit, in the second a body of water. Each boy’s vulnerability is poetically distilled in the minimalism of these magical yet realistic rural scenes.

In the photograph “Still Life,” toothy rubber Halloween masks float in buckets of water in a scene of leaf litter and debris. The grotesque malformed jaws resemble the remnants of some disfigured animal and evoke some of the mystery and danger of childhood. It is as if these toys are precursors to the realities of an adulthood yet to come.

In the three photographs with collage elements added, it is only the faces of the subjects that are obscured and transformed. Race, gender and cultural signifiers are the notions at play here; Kenney returns to the artificial trappings of identity again and again. In the photographic collage “Portrait #2,” for example, a floral mask obscures the face of what appears to be a woman with masses of curly hair. The mask and the forced, flat, tribal-like geometry of the face, with its added mustache, give the image a genderless, shamanistic feeling. This may get to the heart of one of the artist’s themes. It seems that we are all wearing masks; whether they serve to help the individual negotiate a dangerous world full of culturally charged signifiers or act merely to obscure the truth is uncertain. The examination of the relevance of those signifiers is the gray area Kenney has chosen as his playground.