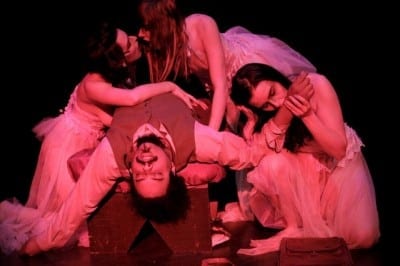 Vampires in Little Five Points. What were the odds?

It would seem like the ideal setting: gothic creatures of the night, tending to a treasured mythology in black, nesting in the cozy confines of 7 Stages. But beware: Rob Thompson’s rock-opera adaptation of the Dracula myth, “Haus Von Dracul,” is a work in progress. 7 Stages co-founder Del Hamilton said as much to the audience waiting in the lobby of his venerable theater Friday night, and the playbill confirms the point:

“It takes a long time to create a new performance that features music, and the artists involved consciously decided to concentrate on Part 1, so we could better decide how to mount a fantastic performance next year of both parts,” says the extended explanation, which concludes with an invitation for a “talkback” after the show. The semi-production, which runs through Sunday, February 13, is as rough around the edges as Hamilton and the playbill suggest. Hamilton, the show’s director, made a solemn promise that is fulfilled: “Haus Von Dracul” rocks. Blessed with three guitars (not counting the bass), Thompson’s band, the Little 5 Points Rockstar Orchestra, charges head-first into the darker edges of goth metal that make the production feel like a rock show with really fun clothes (which easily could’ve been purchased at nearby shops in L5P).

Also as promised, the plot (so far) remains faithful to the Bram Stoker classic. The Count (Thompson) welcomes English solicitor Jonathan Harker (Chris Love) to his forbidding castle in Transylvania to oversee a real estate deal back in England. Soon Harker realizes that he’s trapped in the castle, cursed by Dracul and his seductive vampiric brides (the diaphanous trio of Naomi Lavender, Madeline Brumby and Madison Laughridge).

And from there, it’s all about the blood as Dracul chomps his way to Jolly Olde, while Harker becomes the brides’ official bite mark.

Thompson’s fondness for musical spectacles is well documented, as he’s proved in such ambitious projects as “Hair” and “Christmas With the Devil.” You can see the makings of something dark and deep here, whether in frequent collaborator Shane Morton’s exquisite makeup or a score that alternates from crunching chords to stinging leads.

Then there are the leads, Thompson and Love. Thompson is a towering presence, with pointy features that include long, curling fingers, as well as stringy black hair and a cape that expands into bat wings (though only during the applause). But he possesses neither the vocal range nor the expressiveness of Love, and there’s little chemistry between them. (Even Rick Atkinson, manning dual roles as coach driver and ship captain, had more moves than the count.) The choreography sometimes made the brides entrancing. But it completely failed the two most important members of the cast, for the dance between Dracul and Harker has unlimited potential on a stage.

The sold-out audience was nevertheless supportive, rocked by the music if not overtaken by the entire production.

Just as the rock opera was about to start, Morton, in full gothic costume and makeup, cheekily warned the audience that three people had died during Thursday’s opening-night performance and cautioned, “If you value your sanity, tear up your ticket and leave right away.” It’s the kind of campy shtick you might expect from Morton when he hosts the Silver Scream Spook Show as Professor Morté. Thompson’s intentions seem a lot more serious than this, so Morton’s intro felt a little off-key.

There’s a lot of promise in this production, and it may benefit over time from some fleshing out (uh, sorry). But right now, despite his best of intentions, it may well be that Rob Thompson has bitten off more than he can chew.