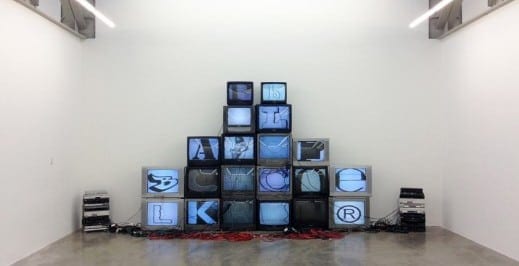 Review: Eight artists, in the Contemporary’s “Coloring” and “In Translation,” take a multitude of creative paths Coloring and In Translation, two exhibitions at the Atlanta Contemporary Arts Center through March 8, playfully and intelligently highlight multiple intersections of concept and praxis in the work of eight local and national artists.

Taut (2013), a site-specific installation of blue, yellow and Green Egyptian cotton thread by Anne Lindberg, visually vibrates like radiating beams of light. Stapled to the left wall in a discernible oval grid, the individual threads disperse as they stretch to the opposite side of the gallery, optically mixing the original hues and varying their saturation. The installation is just above eye level so that its ephemeral appearance gives way to a physically disorienting experience as the viewer approaches. Kate Shepherd contributes three stained wooden panels on which she has laser-cut lines based on cracks in the sidewalks of New York’s Central Park. Hanging these horizontal “sidewalks” on the wall is disorienting, and it creates a sense of fragility, as gravity threatens to make sections fall. The reflective silver stain of Light makes it more emphatically objectlike than the transparent green of Foliage (2013) or brown stain of Wood (2013). But all operate like Donald Judd’s “Specific Objects,” defined in 1964 as art that exists somewhere between painting and sculpture.

Whether considered light or pigment, white and black embody total fullness or absolute emptiness. Scientifically, in terms of wavelengths of light, black is the absence of color. ACAC studio artist Paul Stephen Benjamin’s video installation ABCKL (2013) uses the time- and light-based medium of video to turn such “truths” inside out (like the title of his installation).

Displayed on conspicuously old monitors and TVs, some dating from the 1960s and 1970s, images from the last 50 years conflate the past with the present. Though his medium is based in light, Benjamin’s “black” signifies a richness of political, cultural and historical meanings: the presence (not absence) of color.

White is the color that dominates Rutherford Chang’s installation (and ongoing project) The White Album. Chang has collected more than 900 White Albums — the Beatles’ 1968 release so named because of its plain white cover. He has hung multiple copies on the wall and placed more in bins for viewers to thumb through, each bearing unique marks of ownership, use and wear.

Chang digitally superimposed the first hundred of these albums into a single image that he then printed onto a new album cover. The result is a richly colored pastiche of names, drawings, messages and accidental stains, calling attention to the variations of color among the album covers. Here, time is an agent of color.

Chang also digitally layered the soundtracks of the first hundred vinyl discs, including scratches, dirt and other irregularities, into a single recording. The original songs disappear as individual recordings become progressively out-of-sync, and the evidence of wear accumulates until the sound resembles white noise or shades of the band’s psychedelic track “Revolution 9.”

Installed between Benjamin’s “black” and Chang’s “white,” Bill Adams’ painted cardboard and wood constructions assert themselves in red, plum, pink, green and yellow. Mostly oval or rectangular shapes standing on one or two wooden legs, they are intended as architectural stand-ins for human presence. In Plum Stick (2013), for example, a piece of recycled wood previously painted green, red and purple, has been cut in the shape of a plum and mounted atop a deep-purple wooden stake. The constructions — described by the artist as autobiographical or simply human — derive from Adams’ semi-autobiographical drawings. The placement of Adams’ assemblages between Chang’s White Album project and Benjamin’s riffs on the color black accentuates Adams’ rich color, but the sculptures’ totemic quality is more compelling than his palette.

In Translation presents three artists whose processes transform personal and human experience. Mary Shelley’s 1816 novel Frankenstein provided Nathan Sharratt with a model for the artist’s studio as a laboratory and the artist as “creator.” The first page of Shelley’s text became the starting point for Ligatures, Page One, Or: Nathan Sharratt’s Modern Prometheus (2014), a work in progress for the duration of the exhibition.

On the floor below the black vinyl text is a bright pink hand, three-dimensionally printed in his studio. More body parts will appear as the artist builds his own “monster.” For Sharratt, an ACAC studio artist, this work translates potential, and choices that we make as we go through our lives, into tangible creations. Jonathan Bouknight: Two Dancers: One Carries the Weight of the Other, from the Gaze Series, 2013-14, acrylic on butcher paper. Courtesy the artist and Whitespace Gallery, Atlanta.

Jonathan Bouknight, a former ACAC studio artist, has contributed a two-part installation, Two Dancers: One Carries the Weight of the Other (2013). In a departure from his well-known video interrogations of social and personal identity, the video in this piece depicts a young man and woman, intertwining their bodies and moving slowly through space. In a departure from typical chronology, the video is a preparatory sketch for an ongoing series of wall-sized, blind contour drawings hanging on the opposite wall.

Like Sharratt’s installation, this is a work in progress. Every day the artist adds another sheet of white butcher paper to the wall and creates another contour drawing. Ben Schonberger’s series of inkjet prints collectively known as Beautiful Pig (2013) is composed of photographs and memorabilia belonging to retired Detroit police officer Marty Gaynor organized into annotated episodes of Gaynor’s years on the force. Schonberger was introduced to Gaynor while attending Cranbrook Academy of Art. Over the course of two years they met weekly and sorted through thousands of Polaroids of arrested suspects and other ephemera, arranging the collection into an archive.

The prints range from Polaroids of suspects prior to arrest to handwritten explanatory notes paired with photos and official documents. One piece includes Gaynor’s business card, a photograph of a suspension bridge, a disciplinary charge sheet with Gaynor’s handwritten notation “slap on the wrist for telling a drunk to ‘jump in the lake’” and a yellow handwritten note that explains, “I got the idea from watching too many Dirty Harry movies.”

The series is framed on one end by a photograph of the artist dressed as Gaynor, next to a ’70s photograph that resembles a still from a campy cop show: a policeman wearing a T-shirt emblazoned with “Beautiful Pig,” who points a gun at the camera. At the other end is the last photograph of the series, Sergeant Marty Gaynor: Systems of Identification, Occupation and Faith (2013), an arresting recent photograph of Gaynor in the synagogue where he had his bar mitzvah, wearing a yarmulke and prayer shawl over his uniform with badge, service ribbons and handcuffs. Signifying power, faith and authority, Gaynor is formidable and remarkably human.