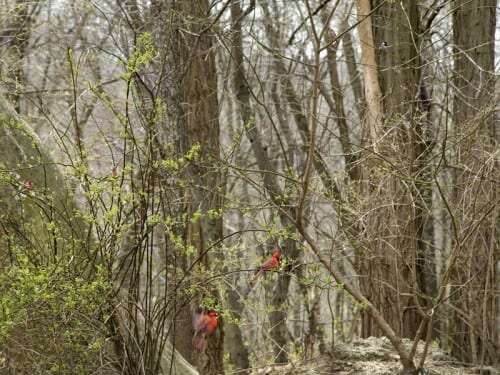 The primary meaning of “cardinal” is “paramount,” and curator Rachel Reese’s “Cardinal,” at Marcia Wood Gallery and Twin Kittens through July 21, is certainly the Atlanta gallery scene’s paramount intellectual challenge of the summer. For all its seductive visual pleasures, it yields up its meanings only with a certain amount of verbal guidance.

The show’s invitational image superimposes a version of the compass points of the “cardinal directions” on a photograph of two bright red cardinals in a woodland, and thus offers a clue that the exhibition might be about nature and . . . location, maybe? Or perhaps navigation?

Walking into the show itself doesn’t clear up the mystery. There are no wall labels, so the overall arrangement of the work is the viewer’s first impression. Starting at Twin Kittens, what is immediately noticeable is a fascination with birds and butterflies, especially birds, and with doubleness, because more than one photograph appears to be hanging adjacent to its identical twin. The first thing one sees at Marcia Wood is a pair of photos of what appears to be the same urban landscape scene, except that almost everything in the landscape is different apart from two small figures, who strike what seems to be a similar pose in both pictures.

The doubling or near-doubling of images (some of them distributed between the galleries, others installed as diptychs) is a reference to stereoscopic vision that makes complete sense only after we become aware of the 2006 essay by Magnus Bärtås that inspired the exhibition. The wordplay on “cardinal” the bird and “cardinal” as in “cardinal directions” is evident from the exhibition’s visual concerns with ornithology and geography, but without knowledge of the essay’s diverse intellectual concerns, viewers might wonder why cardinal numbers and Catholic prelates couldn’t have found their way in as well. Once one realizes that the show derives from a Swedish essay about ways of looking at nature and organizing it in our minds and in our museums — it’s a catalog essay for Björn Larsson’s photographs of natural history dioramas — the logic of the exhibition becomes considerably clearer. The show is indisputably about looking and about finding our way in the world, or in the landscape, anyway.

The details require a great deal of puzzling out, from the intentions of the artists (mostly photographers) to what is actually happening in the works themselves. The photographs of the repeated couple by Barbara Probst were taken at the same moment by cameras positioned in different places. The cardinals on the invitation, from a photograph by Eileen Neff that’s on view at Marcia Wood, are in a position identical to the single cardinal in the companion photograph at Twin Kittens, because Neff took two pictures in quick succession, using a car window as an implicit frame that appears nowhere in the images themselves. (This business of “framing” is important in the Bärtås essay, so the photographer’s statement about this is far from extraneous information.) Curator Reese parallels Bärtås’ interest in ways of seeing with her own interest in ways of representing the world through photography; with only one or two exceptions, there is scarcely a straightforward piece of darkroom work in the exhibition. As her page of notes on the artists reveals, AnnieLaurie Erickson allows her photographic materials to decay; Bryan Graf adds an additional layer of fogged film to his color prints; John Chiara makes oversized negatives that require extraordinary techniques from exposure to development; Lee Arnold creates a painterly effect in video by using a waterproof camera immersed in a glass of water.  Although the results are spectacular, none of how this extraordinary array of visual inventiveness was achieved is apparent to the uninitiated viewer — a fact that suggests many possible avenues for later reflection.

If we have read the Bärtås essay attentively — the Larsson-Bärtås catalog itself can be read at Twin Kittens, and a single photograph by Larsson appears in reproduction at both galleries — we will recognize the reasons for the presence of political dimensions of landscape. This perspective is offered, at Marcia Wood, by images taken with permission from the website of the Center for Land Use Interpretation.

If we haven’t read the essay, the CLUI-provided photo of a sign pointing to an “Interpretive Site” is still particularly amusing once we know the identity of the art collective and something about its quirky methods for calling attention to corporate and military depredations in once pristine natural locations.

This suggests that a guided tour might be necessary to appreciate all the dimensions of the exhibition, but the works themselves rhyme beautifully as a visual experience without all the conceptual overlays. Stephanie Dowda’s lovely, semi-abstract landscape photographs are a pleasure to view even without the knowledge that they were made with a semi-broken camera wiping out parts of the image with unpredictable light leaks. John Paul Floyd’s elegantly printed images of landscapes deformed by social forces also stand as aesthetic objects without further interpretation — although every artwork ever made is subject to further interpretation.

The presence of drawings by Captain William Jordan, however, requires some background information — provided on site, fortunately, in a biographical note — in order to appreciate the reason for their inclusion in what is almost entirely a photographic show. Jordan took up his career as a self-taught artist after going blind, and these drawings from memory include pinpricks to guide his hand in forming the images correctly.

We are thus taken back to the theme of how the mind constructs what we see, both in terms of what we notice immediately and what sorts of prior knowledge we impose on the image to make a place for it in our world. This prior knowledge is both personal and social, or implicitly political. We never have a pure encounter with nature, or with anything else in the world.

It is with this in mind that curator Reese states that the trip viewers make from one gallery to the other is part of the exhibition. What we notice and interpret in the scene around us during that drive or ride (few viewers will choose to make a semi-hazardous six-mile walk across Atlanta) is intrinsic to the viewing experience. By traveling with self-awareness between the venues, each of us creates a conceptual artwork as a contribution to “Cardinal,” each of the works unique and each known to its creator alone. Because we are always limited in our interpretation of our experience, we may not understand that artwork any better than I understand the single conventionally sculptural contribution to “Cardinal.” (The other sculpture, Letha Wilson’s “Light Leak (Grand Tetons),” is a wall-mounted piece consisting of two cut and folded C-prints.) Richard Torchia has created site-specific viewing windows in identically constructed wooden sculptures at Marcia Wood and Twin Kittens, each viewing portal containing transparent colored film from an old color copier that replicates part of the CMYK process of color reproduction. When we look through them at different angles, we see the scene in different single colors.

I understand why these sculptures are there — they are another metaphor for how our technology alters our angle of vision and what we see as a result — but I don’t fully understand the details of the optics involved. Other viewers, however, may fail to catch the echoes of the reams of sociology of knowledge and interdisciplinary fieldwork that went into the theorizing of the rest of this exhibition. Once again, we see that our present experience is shaped by our prior experiences and what we have remembered from them, even though we are rarely made conscious of that fact.

And that lesson, surely, is of cardinal importance.

View more photos of artwork from the exhibition here.