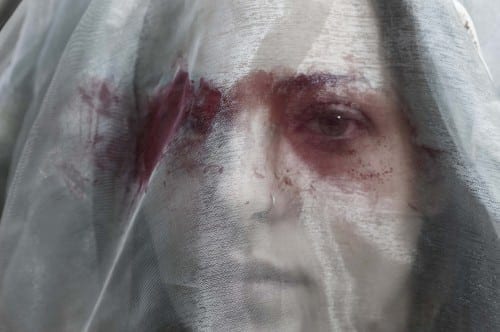 When Charlie Watts set out to create an exhibition about sex trafficking, she faced the problem of making art that would neither drive away potential viewers nor blunt the impact of the unpleasant facts embodied in the works. The photographic light boxes in “The ThrowAways,” at Emory University’s Visual Arts Building Gallery through July 25, accomplish that goal quite brilliantly.

Before this project Watts, a recent Emory graduate, had involved herself with the photographic genre of pictorialism, updating its neo-romantic aesthetic in glowing, digitally produced color images. She first presented the sex trafficking crisis in set-up scenarios influenced by the example of Gregory Crewdson, but she discarded that entire body of work as untrue and inadequate to the gravity of the subject.

The digitally produced photo-collages in light boxes that she then created are a genuine breakthrough. Watts weds the poetic elements of the pictorialist aesthetic to grim social reality, by visual means and an impressive amount of research. Her use of photographs of victims and pimps taken from the Internet grounds the photo-collages in documentary contemporaneity. The slightly forbidding proportions and metal framing of the light boxes add to the effect. We have traveled a long way from the fairy-tale world of Watts’ other work.

“The ThrowAways” provides exactly the right mixture of cold realism and metaphoric evocation. The images themselves offer tension and ambiguity in place of the oppressive quantities of information that burden so many socially committed artworks. Yet the facts are available in abundance, but rather than appearing in text blocks on the gallery wall, they are accessed through a QR code or, for those without smart phones, in the pages of a gallery printout. Charlie Watts found this picture of a convicted pimp online for the image “mouth wide shut.”

Watts has created each image from a variety of sources. In some, an artfully blurred picture of a victim is overlaid with a more visually legible mug shot of a perpetrator. In others, the blurry overlay combines with a clearer photograph of an unidentified individual active in the fight against sex trafficking.

Each image uses a different strategy of juxtaposing its various semi-transparent digital layers. Although Watts gets most of her images from the Internet, her own photos shot in Amsterdam’s red-light district provide the dominant background color in a few pieces.

This reference to legal prostitution adds a conceptual dimension, but one that remains invisible to the uninformed viewer. (Although knowledge of this detail is extraneous to the understanding of the work, it indicates Watts’ concern for creating unconventionally deep levels of visual metaphor.) The artist should perhaps have clarified the sources of all her images. The identifiability of the young Asian woman whose face is only slightly obscured by the victim-victimizer overlay in “ThrowAways v” (mislabeled as “ThrowAways iii” on a gallery publicity sheet) seems inappropriate. It might have helped to know that she is Korean-American videographer Minkyung Sung, whose documentary on Atlanta sex trafficking gave rise to Watts’ commitment to educating the public. On the other hand, the discomfort inherent in not knowing that may well add an essential element to the work.

Apart from this particular homage, the focus is on the sex trafficking crisis itself, with visual symbols providing striking allegories for different aspects of the issue. “i-20,” a portrait in which the young woman’s face is obscured by the brilliant lights of a truck stop, represents the role of Interstate 20 truck stops in sex trafficking between Birmingham and Atlanta.

“many face” is a haunting blur, harking back to Watts’ original pictorialist influences, of 30 superimposed faces of women who have been trafficked or who are engaged in activism against trafficking. “golden disco,” showing a partly obscured Hispanic woman’s face, was originally meant to illustrate the luring of Mexican women into sex slavery in Texas with promises of legitimate employment. Two days before the exhibition opened, however, a white male was arrested in Atlanta for allegedly engaging in the identical practice, and the image took on local relevance.

Watts is especially concerned with communicating the extent of the problem in the white suburbs; not only are a near-majority of the customers upper-middle-class white males, but a surprising number of the pimps are suburban white males selling the services of underage white girls from economically distressed neighboring households. (Watts cites specific cases, including a gang that was run by a well-to-do star student athlete.) The impression that this is simply an African-American or inner-city problem is unjustified, and Watts has gone to great lengths to conduct interviews with activists and with a county district attorney to confirm this.

Onsite computer links and brochures provide comprehensive information about local organizations working to provide assistance to victims of sex trafficking and engaging in educational outreach to increase public awareness. This exhibition, Watts’ own contribution to the work of provoking audiences to action, will travel to two other local venues (the Rollins School of Public Health and Agnes Scott College) at dates not yet determined.

The comprehensive quality of this project, combining activist scholarship with innovative aesthetic exploration in ways rarely seen in this genre, illustrates the importance of including visual arts departments in universities. Although there is never any guarantee of the results of this exhibition, the teaching and making of visual art in an intrinsically interdisciplinary setting can lead to creative outcomes that even the best equipped and intentioned of art schools cannot provide.