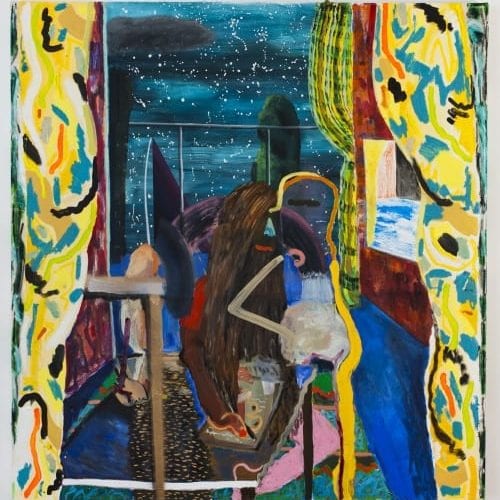 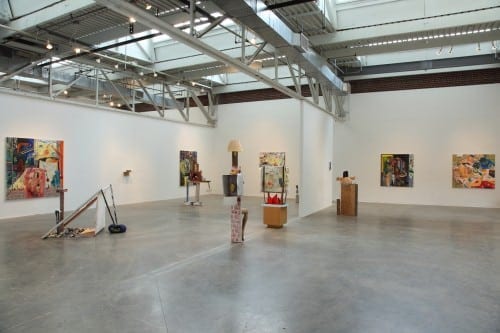 One of the benefits of being an artist, if you’re like Shara Hughes, is that your personal life can wind up cataloged in a tome of documentation that is your artwork. The Atlanta-born Hughes’ show at the Atlanta Contemporary Art Center, coyly titled “Don’t Tell Anyone But . . . ,” comprises an enormous batch of new work by the 32-year-old artist, who indeed paints her life, kitchen sink and all.

Though it’s not always apparent in his curatorial selection, Contemporary artistic director Stuart Horodner gravitates toward artists who risk revealing what might otherwise remain private. A painterly conversation between paint slinging and enigmatic sculptural assemblages, this first Atlanta solo show for Hughes, a 2012-13 Working Artist Project grantee, oozes a private exchange between artist and lover that is as playful and whimsical as it is grounded and tenderly honest. (Hughes will give a talk at 11 a.m. on Saturday, May 18.)

The exhibition signifies bold new directions for Hughes, and while occasionally irresolute, it largely echoes an undeniable inventiveness that is both buzzingly fresh and firmly situated in a monumental lineage of art history. Hughes draws from a diverse historical palette, channeling stylistic idiosyncrasies from her creative ancestors — Pablo Picasso, Philip Guston, Claes Oldenburg — as well as contemporaries such as Dana Schutz (whom the art center exhibited two years ago).

The main gallery, chock full, feels more like an installation than an exhibition of discrete paintings and sculptural objects. Given Hughes’ Matisse-inspired focus on interior spaces, both literal and psychological, the overall effect is one of active immersion within the artist’s imaginary realm, as if walking through one of her paintings. 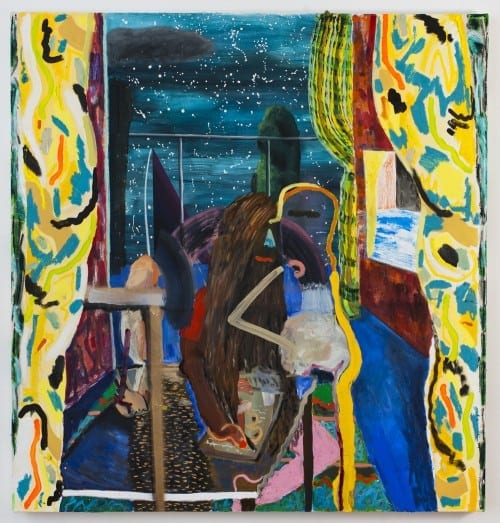 Shara Hughes’ Fake Me Writing a Letter to Fake You

She has a talent for imbuing the most mundane of objects with a definitive human vitality: a coffee cup that might suddenly push itself off the edge of a table, or the arm-like handles of a swimming pool ladder that might wrap themselves around one’s neck. She has used these surrogate agents for the human form successfully, both here and in the past. The more recent use of literal figurative elements — Picasso-esque linear reductions or Guston-inspired dismembered body parts — are less successful, despite overall strong compositions. Ironically, some are less lifelike than Hughes’ deliberately non-human forms and seem to operate more as compositional elements that serve to hold the paintings together.

Of the 12 new paintings exhibited, the strongest, such as Far Out, evoke an emotional specificity and certainty, as though the image is about a particular feeling or place in time. Like the other more cohesive works in the show (for example, Fake Me Writing a Letter to Fake You), Far Out defines an intentional sense of space — foreground, middle ground and background — offering the eye fluid navigation through quirky psychological scenarios.

Hughes’ titles are often witty and endearingly honest, such as Boo hoo! I’m in Love, and thereby serve as entry points into her personal narrative, one she openly admits is a chronicling of her love life. In a bold move, this work confirms that art about love doesn’t have to be sentimental and embarrassing; it can be smart and quirky and strange.

The inexplicably lifelike sculptural works on view are an exuberant departure, pervading the room with an uncanny self-awareness. Immediate and fresh, they challenge the assumptions of painting as they exist within Hughes’ oeuvre while also extending her painterly practice in surprising ways. Repurposing what might be mistaken for household garbage (or might actually be), the artist gives these bizarre constructions a discernible pulse, playfully maneuvering between flat and dimensional space, between representation and abstraction, between the real and the unreal.

Individual elements are plucked from Hughes’ canvases and transformed into recognizable household objects. A delicately painted line becomes a literal thread of yarn; a circular blob of red hues morphs into an actual dead rose. These works ultimately illuminate qualities of the painting that might not otherwise be discovered, and despite being three-dimensional assemblages, have a fast and loose quality that feels reminiscent of quick gesture painting. 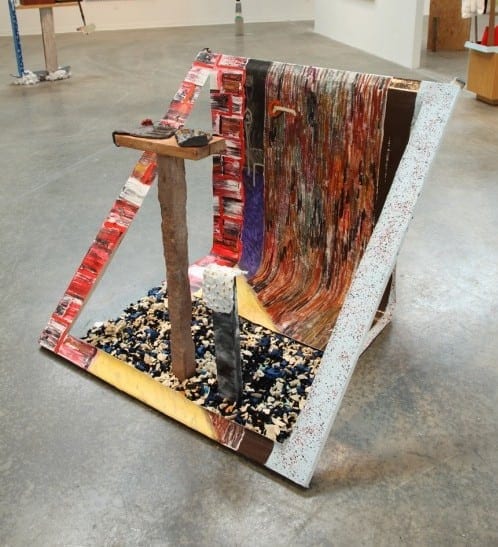 Hughes’ I Can’t Wait to See Your Show

I have many favorites here. Last Night Last Night is ingenious — the fluffy, paint-stained down comforter wedged between pieces of glass is a poly-referential enigma. At once an abstract painting (or two), a figure, a squeegeed monoprint on fabric, a found object, a memory, a sculpture, this work has numerous points of entry. 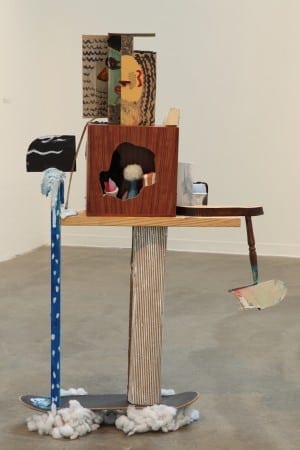 Man With A Plan

Other playful constructions, such as the loopy but convincingly functional handmade tools in Let Me In, recall Oldenburg’s earlier Pop works of everyday objects fabricated out of plaster and slathered in gobs of paint. It’s impossible to behold Man With a Plan without recalling Picasso’s collage works from 1912 to 1914, which despite being mostly works on paper, resonate with Hughes’ constructions in their formal decision-making.

Most painters alive today would probably confess that they have felt a need to defend painting as still a relevant medium. I remember a brief repartee between Nato Thompson, Creative Time’s curator of social engagement public art projects, and Atlanta critic Jerry Cullum at the Contemporary a few years ago on the importance (or unimportance) of contemplative solitude in a painter’s artistic practice. Thompson wasn’t buying it.

Some would argue that painting had its heyday back when making gigantic abstractions was still considered a radical form of art-making. Perhaps it’s possible that painting, as it stands in the face of the ever-evolving attention-deficit art market, could be an even more radical move under these new conditions. Shara Hughes’ very personal new explorations in painting and painterly sculpture are an unusual treat for Atlanta.