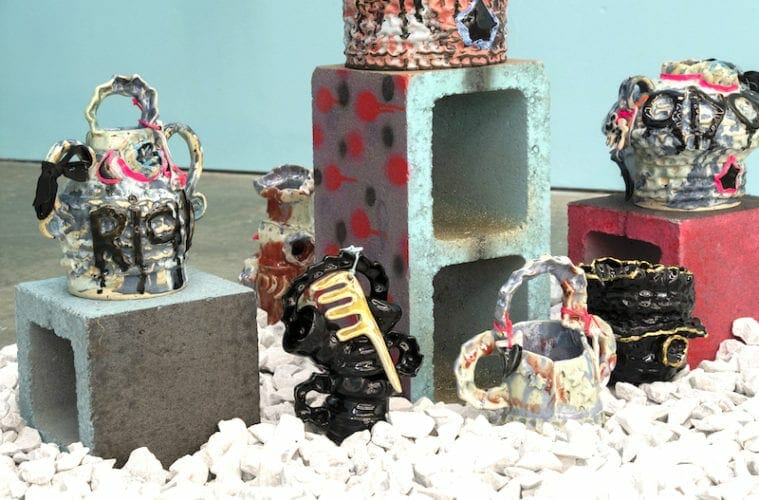 The Contemporary's 2021 Atlanta Biennial features the work of 30 artists, all with ties to the Southeast. Both parts of the exhibition -- "Of Care and Destruction" and "Virtual Remains" -- are on view through August 1.

In the dark times will there also be singing?

Yes, there will be singing. About the dark times.

Those words, written in 1939, state the challenge of creating art during extremely difficult times. The 2021 Atlanta Biennial is a strong visual representation of the struggles of the past year. Of Care and Destruction, curated by American University’s Jordan Amirkhani, expresses ideas of hope, grief, spirituality and renewal. This exhibition is dedicated to the labor and legacies of political activists Stacey Abrams, Helen Butler, Felicia Davis and Nsé Ufot. Thirty artists celebrate the ideas and actions of these activists and the changes they have brought about in the locally and nationally. TK Smith, a former ArtsATL contributor now studying in Delaware, curated Virtual Remains, also part of the Biennial in Atlanta Contemporary’s project spaces. Both are on view through August 1.

Many artists here use only the color black. With its richness and intensity, the hue becomes a signifier of strength and power. Two sculptural works in clay by Donté Hayes seem to be abstract, but their titles — Fade and Lantern — help the viewer understand their connection to his body as an African American man. These ceramic works have a matte-black coating whose texture resembles thatch or woven grass. Hayes uses a metal tool to carve this texture into the clay, altering the perception of the sculptures and their material, and lending their abstract forms a power and mystery that links them to the African diaspora. Lillian Blades, “What is your reflection?” (2021), lobby installation.

Eleanor Neal’s Transcending Ambiguity is drawn in a woven crescendo of curly black lines in ink, graphite and oil pastel. A massive network of lines turns into a gorgeous web of hair that opens to reveal a light at its center. Marianne Desmarais’ three sculptures, antiforms–2.2, antiform–8 and antiform–9, all made from the small air pillows used for packing, show her understanding of how the color black can transform an object.

These soft sculptures are painted with a solid black synthetic rubber coating that makes them delightful non-forms that drape against the wall and sit on pedestals. Their elegance is intensified by the funkiness of the medium, their softness and the humor of the form. William Downs’ Till we meet again . . . it didn’t seem real. I held your hand as you quietly left the troubles of this world, a black-ink drawing on unstretched canvas, is tacked on the wall. Multiple elements animate this work, which elucidates the pain and loss wrought by the pandemic.

Piled-up bodies depicted in a style influenced by surrealist automatic drawing, a kind of visual stream of consciousness, evoke sadness. The figures, all drawn in a liquid black line, overlap one another and fill the space. The clustered figures, androgynously rendered, are wrapped in thorns of barbwire as they climb on top of one another in a mass of humanity. Two other elements are attached to the canvas. One is a small drawing of two figures on a white ground in a more painterly style with a black frame; the other is a small video monitor that plays an animated drawing. These two elements add an important physical dimension to Downs’ work. They bring the image into our time frame. There are several installations here, their elements suspended in the gallery space to create their own worlds. Lillian Blades’ What is your reflection? is a mixed-media assemblage that hangs in front of the gallery windows so that its mosaic-like structure moves and flows. What’s terrific about this work is what you see through its many hanging translucent or transparent particles. It’s hung so that it becomes an active frame through which viewers experience the space, the people in it and Blades’ other work on the gallery wall.

Zipporah Camille Thompson’s installation, boo hag blue, casting stars into swaddle cloth is suspended in a gallery corner. The two walls that create this corner are painted a warm turquoise and the work is very much like an altarpiece with crocheted fishing nets in different colors and materials cascading from ceiling to floor.

Nestled on the floor is a small collection of ceramic vessels placed on painted cinder blocks nested in a gravel oval. Thompson’s color sense is spot on; the saturated color of the hanging forms recall Spanish moss hanging from trees, giving the work a small but magical presence. José Villalobos’ We Have Always Been, also in a gallery corner, consists of hanging elements: a saddle, cowboy boots and hat have been altered and adorned with a fringe of fabric. These cowboy icons hang precariously above a small, very spiky cactus in a circle of earth on a pedestal. Small yellow flowers dot the wall to make a kind of sculptural wallpaper. Shanequa Gay’s the true manifestation of the garden of bonnevilles, sacrifice and black abundance covers an entire wall with painted iconic pictograms. This work reads as a grand altarpiece with symmetrically repeated images of two women (one has a bird’s head), a wreath of leaves, roosters and watermelon slices anchored by the doubled front of a Pontiac Bonneville. This mural in rust, sap green and white implies a story of the power and strength of the woman and her peers. A three-dimensional biomorphic botanical hand-cut paper curvilinear relief that crawls up the wall hangs over the photos and obscures the woman’s face. These giant blooms in rose, pink and gray contain pictures of an androgynous face. The photo of the woman is presented twice in each work and each print is slightly different in tonality. A QR code provides access to a sound element. The juxtaposition of the photos with the sculptural elements is a triumph of pictorial tropes that alter the perception of the costume and façade of the antebellum South.

In the past year, the artists in the biennial — which includes work by Nekisha Durrett, Le’Andra LeSeur, Michi Meko, Tori Tinsley and many others — have found this pause a time to work, to take chances and to consider what it means to create. Many artists have described this time as one of deep concentration and freedom when change will arise from turmoil. This is a time of healing and renewal. It is a time for reflection on what is lost and how to move forward. It is a time of destruction, but perhaps most of all, a time for caring.