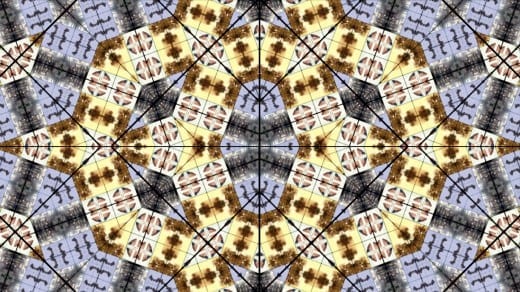 “Shadow Puppets: Traces of New Documentary Practices,” at Georgia State University’s Welch School Galleries through February 8, brings together work by 11 artists that addresses the way narratives can play out in a variety of visual mediums. The subject of war dominates the exhibition, giving it a political edge if not a definite voice.

The video works are the strongest pieces in the show, curated by Jill Frank and Stephanie Dowda. All deal with war, but in very different ways. Two consider the after-effects of war-related violence. Lamia Joreige’s “Houna Ma Roubbana Hounak” (“Here and Perhaps Elsewhere”), from 2003, confronts ongoing questions in her home country of Lebanon years after the end of its civil war. During the war, from 1975 to 1990, thousands of people disappeared, and few were ever found. Joreige traveled Beirut, asking those she met whether they knew anyone who had disappeared and videotaping their answers. Her interviews highlight the continued confusion and loss resulting from these presumed kidnappings, and also an implicit futility. More than 20 years later, there’s little hope of finding the missing; all that’s left are fading memories.

Jason Lazarus’s “The Top of the Tree Gazed Upon Anne Frank While in Hiding,” from 2008, presents the uplifting side of wartime remembrance. This contemplative 15-minute piece shows the tree immortalized by Anne Frank’s diary gently swaying in the wind, the silence occasionally punctuated by the rustling of leaves and the sound of church bells. The wall text supplies quotations from The Diary of Anne Frank relating to the tree. On February 23, 1944, she wrote, “From my favorite spot on the floor I look up at the blue sky and the bare chestnut tree on whose branches little drops shine, appearing like silver.… As long as this exists, I thought, and I may live to see it, this sunshine, this cloudless sky, while this lasts I cannot be unhappy.”

Frank’s story resonates as a symbol of the endurance of youthful spirit as well as persecution, and the tree that gave her joy has become representative of that endurance. It was scheduled to be removed in 2007 after years of a fungal infestation, but it was reinforced with supports instead and is expected to last 15 more years. Lazarus’ video, made after the supports were built, does not show this incongruous addition, because only the treetop is visible. But the tree’s complicated status as memorial resonates for the viewer. A scene from Sanaz Mazinani's “Conference of the Birds.”

The other two videos, Paul Chan’s “Re: The Operation” and Sanaz Mazinani’s “Conference of the Birds,” address the ambiguous nature of wartime imagery. “Conference of the Birds” begins with a pulsating kaleidoscope of images set to the sounds of protest. As the kaleidoscope expands, the images reveal themselves to be a mixture of scenes from the Arab Spring and Occupy Wall Street protests, interspersed with national flags. Though the scenes become clearer as the video progresses, very little information is provided; though we get a sense of the groups involved, the details of the conflicts are unclear and the scenes, when seen unmediated by dazzling patterns, become more chaotic rather than less.

Chan’s “Re: The Operation” exploits choppy visuals, voice-overs and scripted narration to produce satirical fiction. The video depicts the Iraq War through the writings of members of the George W. Bush’s administration as if they were soldiers involved in the conflict. It begins by imagining Condoleezza Rice writing a letter that details a possible affair with another Cabinet member as well as her doubts and personal turmoil. A narrative by an actress is played over shots of soldiers, as well as innocuous scenes of trash, a landscape and a domestic setting, all activated by the context Chan has created. These fictions are humorous but emotional, bringing up questions about the use of images in creating narratives as well as more political questions, such as what would happen if those making political decisions about war were forced to participate at the level of the soldier. A scene from Paul Chan's “Re: The Operation.”

The other works in “Shadow Puppets” deal with themes of imagined and artist-created narratives, but the subject of war looms large. The exhibition raises many questions about the use of images and the information — false, true or personal — provided by documentation, without providing many answers, reinforcing the sense of ambiguity that is at its heart.

On February 7, there will be a panel discussion among James Elkins, professor at the School of the Art Institute of Chicago; artist Daniel Bejar; GSU professor Susan Richmond; and critic Cinque Hicks. The discussion begins at 5:30 p.m. in GSU’s Kopleff Recital Hall, and reservations are strongly encouraged. You can RSVP by clicking here. A closing reception will follow from 7 to 9 p.m.

Also, at 2:30 p.m. February 8 in the Troy Moore Library, Elkins will deliver a lecture titled “Empathy, Affect, Obsession, Boredom: Elements of Current Theorizing on the Beholder,” as part of the Welch School of Art and Design Visiting Artists and Scholars Programs. For more information, click here.