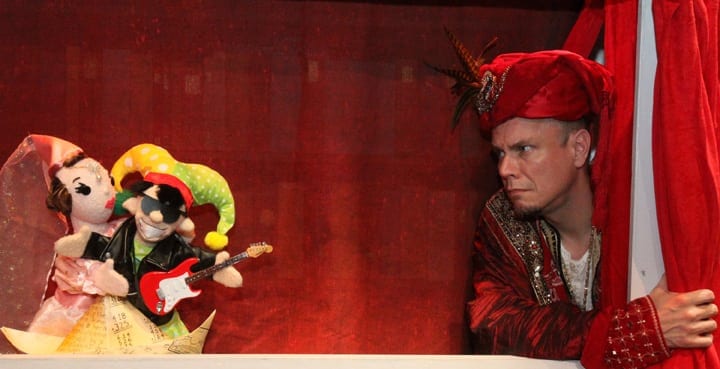 The staff at the Center for Puppetry Arts must be pretty giddy right now. They booked their new 1001 Nights: A Love Story About Loving Stories a long time before Robert Lopez’s Frozen came out and every 9-year-old girl in America saw it four times, manufactured her own YouTube “Let It Go” homage and counted down the hours until the DVD release. What’s a pretty swell production has now gotten more buzz due to that film’s recent success and Oscar wins.

Running through April 6 at the Center for Puppetry Arts, 1001 Nights was written a long time before Lopez won an Oscar for Frozen and before his musicals Avenue Q and The Book of Mormon became Broadway smashes. It’s a 1998 collaboration between him and Adam Koplan, a former Atlantan who became the artistic director of New York’s Flying Carpet Theatre, which is coproducing this run. The two met in New York and penned this loose adaptation of Arabian Nights. This remount is an awfully entertaining production. It doesn’t have a standout “Let It Go” moment like in Frozen, and it really doesn’t need one.

Its plucky heroine is young Sherry (Ally Duncan) who, as 1001 Nights starts, is upstairs finishing her homework. From time to time, her dad (Googie Uterhardt) yells up and checks on her progress. Sherry decides to tell her stuffed animals the story of Scheherezade, a young girl in a kingdom where the king, miffed that the court jester has stolen the queen from him, has issued a proclamation. He will marry a new queen and then cut off her head the next morning. And then marry another and behead too her. And so on.

Scheherezade offers to do the duty, much to the dismay of her father. Before she and the king can nod off that evening, she tells him a story of a fisherman and a genie. He winds up postponing her beheading the next morning and she tells him an even more elaborate tale the next evening, one about Ali Baba, thieves and an unheralded maid who saves the day. It’s clear the king enjoys the cliffhanger stories — and his storyteller.

It might be a surprise that while puppets play a central role in the show, it’s probably a little more of a musical than a full-out puppet production, especially compared to other Puppetry Center children’s fare. Yet it can be enjoyed as both. Some of the finest puppetry here — all designed by Jason von Hinezmeyer — comes from shadow puppets bringing the fisherman/genie tale to vivid life. The half dozen songs are bright and energetic, with a standout being a king’s number where he wonders aloud if he’s a good guy or bad guy. It may sound like a cliché, but 1001 Nights is that rare show that can entertain kids and the adults in the house. In fact, some of the humor and some of the song lyrics are aimed directly at adults. Running at just over an hour, it doesn’t wear out its welcome either.

The performers do double duty here as characters and puppeteers. The five-person cast also includes Mary Nye Bennett, John Wright and Terry Guest. They work together very much in sync.

1001 Nights is slated for a national tour once it finishes its Atlanta run. It’s likely to make some noise. It’s a perfect production for veteran visitors to the Center for Puppetry Arts and for newbies as well. And far be it from me to ever knock a musical that’s about the beauty of storytelling.