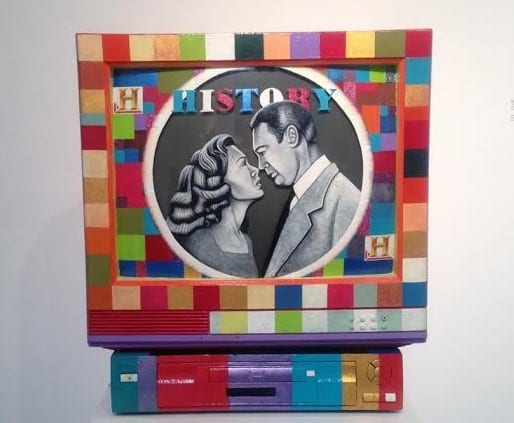 Overcast skies, gathering storm clouds, leaky roofs that drip onto the floor: It’s no surprise that, ten years on from Katrina, the works in this exhibition of New Orleans-based artists obsessively return to the theme of bad weather. Curated by Antenna Gallery and presented as part of an inter-city exchange with Atlanta’s Dashboard, Relative Humidity explores not just the climate and culture of New Orleans, but also everyday struggles to hold together neighborhoods, communities and the environment. Despite some bright spots, though, the show is uneven, and sometimes struggles to live up to the promise of its weighty themes.

Far and away the most striking images, on view at Marcia Wood Gallery through December 5, are a pair of photographs by AnnieLaurie Erickson from her series Slow Light (2012-). Erickson’s work has shown in Atlanta before, as part of Rachel Reese’s 2013 exhibition Cardinal. These images, like others she has produced in recent years, are created using a homemade camera that mimics the process of retinal decay. Shapes that appear sculpted from firefly-like spots of light are afterimages produced by exposing a photosensitive surface and then taking a second exposure as the pattern on the original medium slowly decays. Despite their resemblance to fantastic castles, the photographs are actually of oil refineries at night. The “delayed seeing” that is built into the image-making process mirrors the refineries’ hidden environmental impacts, which only slowly seep into our sight.

The surface of its screen depicts a picture of a man and woman staring at each other in profile beneath the word “HISTORY” while a video loop of sky-like blue and gray patterns runs in the background. Watching the display is a dreamy and slightly hypnotic experience, like drifting in a nostalgic haze; but as the stern and inscrutable expressions of the couple seem to remind us, these reveries can be dangerous. The work’s affective power lies in the tension it establishes between our fictionalized dreams of the past and its still-living reality.

Funky, comix-influenced figures are used to good effect in Ben Fox-McCord’s In the Beginning (2015), which transforms real-world class warfare into a whimsical clash between a pair of hairy, earthbound ape men and a group of costumed bird-people who leisurely drift above in a cloud city. It’s fitting to see the 1% as living in the equivalent of a gated community in the sky, casually dropping eggs to the ground in blithe ignorance of who gets spattered with their sticky goo.

These fantastic elements are given a pop-surrealist twist in Natalie McLaurin’s sculpture My little ray of sunshine (2015), which turns its subject into a walking storm cloud. With a body like a gloomy, baggy sack perched atop gray jeans and uncharacteristically bright pink sneakers, it makes an apt personification of an unwelcome guest.

I’m ambivalent about Bob Snead’s Alaskan Expiration Date (2013), which centers on how easily a serene moment of natural beauty can be spoiled by the presence of someone awful. Snead spends quite a bit of technical skill on embedding a profanity-laced conversation (“suck my dick … no fuck u”) almost invisibly into the foreground of a landscape triptych. On the one hand, this might just be a more sour (albeit also more subtle) take on Wayne White’s text paintings. On the other hand, it’s also effective as a critique of the implied solitary spectatorship of traditional landscape. I’ll admit that I find my own indecisiveness about the work interesting enough that I don’t feel strongly compelled to resolve it either way.

Other pieces in the show, however, fail to make much of an impact at all, mainly through being shallow or lazily appropriative. For example, Ernest Joshua Littles’ faux-graffiti Please Excuse Our Appearance (2015) gets off a weak dig at gentrification, but never moves beyond its one-note premise. And Susan Gisleson’s salvaged black-light poster mounted on green glitter (Untitled, 2015) is just confusing. Though it might look terrific on a dorm room wall, as far as I can tell, it doesn’t make any sort of discernible statement.

As I’ve contended, the best works on view here — Erickson and Williams in particular — are exceptionally strong. Nevertheless, their impact is dulled through juxtaposition with those that are less visually and conceptually challenging, that can be taken in quickly, and that tend towards being cute and overly didactic. This sort of dilution is commonplace, especially in packed group shows (here, 13 artists and 18 works). In the end, its over-inclusiveness makes Relative Humidity an unsatisfying experience.