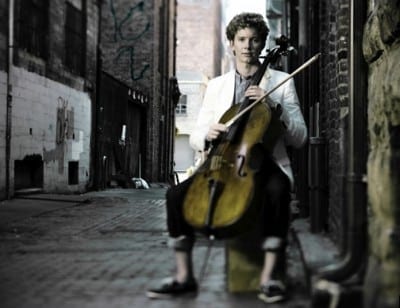 Freakish winter snowstorms in the Northeast almost canceled Joshua Roman’s first performance in Atlanta. The 20-something cellist’s flight was delayed twice. He finally landed without much time to spare, and less than an hour before the start of his recital Sunday afternoon at First Presbyterian Church, next to the Woodruff Arts Center on Peachtree Street, he strode into the church sanctuary to warm up and test the hall’s resonant acoustics.

We were in safe hands. Roman played three of J.S. Bach’s unaccompanied cello suites to a moderate-sized but evidently knowledgeable crowd, including a number of amateur cellists and a passel of Baroque music fans, with a good dollop of overlap between the groups.

At 22, Roman landed a comfy job as principal cellist of the Seattle Symphony, but he left it two years later to risk the pursuit of a solo career, which has been rising steadily and has grown a tribe of devoted fans. Although he has gained some notice for playing new and crossover music in alternative venues in addition to traditional appearances — evidently a trend — Roman forthrightly told the audience at intermission that his favorite composer is Bach, and that he plays one of the cello suites each day of the week, in order, one through six from Monday through Saturday, then on Sunday a suite chosen at random. This constant, daily connection with a profound body of work showed in his performance.

Suite No. 1 is outwardly expressive and joyful. Roman smiled and swayed as he played, either looking out to the audience or shutting his eyes. It was an inner joy of intimacy with the music and his instrument, but one which radiates to the audience. In many ways, this was a very modern and extroverted performance.

Suite No. 2, by contrast, is more introspective, even mysterious in the reserved melancholy found in both the Prelude and Sarabande movements. Its Allemande and Courante offers an inner light. The Minuet movements brighten things up, leading to the concluding Gigue, which, as its moves into its relative major mode, offers a sense of contentment: ultimately all will be well. Roman’s performance of Suite No. 2 was much more Baroque in attitude than the first, in that his use of vibrato was relatively minimal, becoming almost an ornament rather than an obligation. The Gigue may well have been a little fast for some tastes, but indeed what should we expect from youthful exuberance?

With both suites, Roman demonstrated an incredible awareness of how the silence before the first notes of the preludes and the spaces between the movements are also part of the music. The quiet between movements was like a natural breathing space, allowing time for the hall to finish its resonance. It felt like a natural anacrusis to the next movement, a symbiotic in-breath by the musician and his instrument, together as a single body.

With its many extended hand positions, Suite No. 4 is one of the more technically demanding of the group. Again, Roman approached it in the more Baroque manner that he did the second, but he allowed for more deliberate space between movements than with the other suites.

“Bach’s music speaks for itself,” Roman told us, though he admitted that he still had a few words to offer, calling the prelude at the beginning of each suite “one of the best things Bach did.” He suggested that the composer’s improvisatory work as an organist probably influenced this. Even so, Roman audibly and visibly seemed to take a special delight in its concluding Bourrées and Gigue.