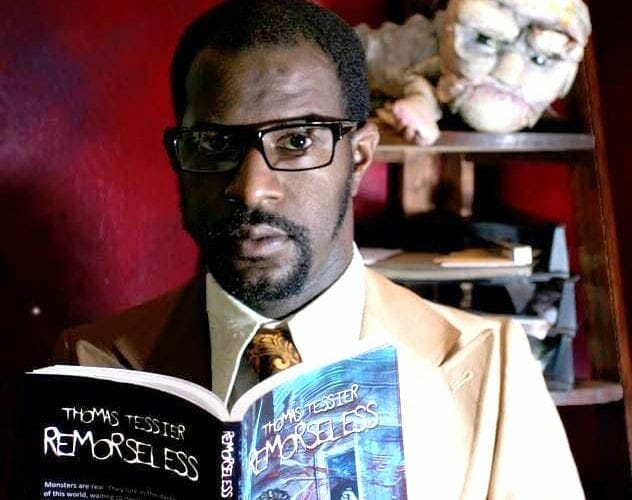 Raymond Carr has spent 15 years in film/TV and theater as a director, performer, prop shop owner, art director and puppeteer.

Raymond Carr: Those in the film/TV industry will soon “have to go out and do something”

As an artist, Raymond Carr goes by many titles — director, performer, shop owner, art director and puppeteer, among them. A prolific Atlanta presence with almost 15 years of theater, film and TV credits on his résumé, he thrives on having multiple projects. Going from warp speed to the relative quiet of a Covid-19 lockdown has been an adjustment, he says, but he’s trying to make the most of his downtime.

Carr had several art director gigs lined up with commercials, including one in Los Angeles, when the pandemic began to spread. All fell apart within days of each other. “The last job I was on, we had prepped it and the director kept on coming up with ways to reduce crew,” he says. “The next day we were shut down.”

Carr, 38, took some time off completely, initially, to gauge the situation. Technically, he’s unemployed and — like many others — had to wait about five weeks before he saw any income. He’s been through the unemployment process before, though, and knew he had to be patient. Raymond Carr has been using his pandemic downtime to work on his short film “Joyriders,” which he hopes to turn into a full-length feature.

Fortunately, he had some post-production jobs lined up, including effects work. He’s using the bulk of his time to finish his short film Joyriders, a science-fiction/adventure film about a trio of teenage girls and boys of color who stumble across a spaceship in Atlanta. Carr hopes to finish it this year and eventually make it into a feature film. “For better or worse, I have made a lot of progress on it,” he says.

Carr moved to Atlanta in 2001 with his family and studied film and video at Georgia State University. Once settled, he began working with the Center for Puppetry Arts and, from 2008 to 2010, toured with its show Walking With Dinosaurs, doing some 80 shows across the nation. He’s also performed at Dad’s Garage Theatre Company alongside his brother Jon Carr, the longtime company member who became Dad’s artistic director on February 1.

Eventually, Raymond Carr made the transition to film and television, understudying the role of Pixel in LazyTown on Nickelodeon. His friends were making movies, he wanted in and made himself useful as best he could. Eventually he realized his ability to build and design was a skill set. He became an integral part of PushPush Theater’s Dailies Project. PushPush went on to make The Signal (2007) and V/H/S (2012), Atlanta-made horror movies that played the Sundance Film Festival. Carr directed 2014’s animated Hitori, opened a prop shop and started his own company — Ninja Puppet Productions, where he is artistic director and executive producer. A Ninja Puppet Production with Raymond Carr and friends.

These days, though, most of his work is in the art departments of commercials, which have started filming again. They began returning a couple of weeks ago, mainly doing projects that require only three or four people on set.

Bigger commercials as well as TV shows and films are holding off due to liability issues. “No one wants the bad press of being first or being cavalier or taking risks,” Carr says.

He says he’d need to gauge the situation and its setup before agreeing to work now. He’s  worked on big-scale features and independent films, and prefers projects with smaller crews.

Future film and TV projects will need to be more creative, he says, with fewer crowd scenes. Still he says, he senses that people are eager to get back to work. “I predict people will get to a point where they just can’t take it anymore and have to get out and do something,” Carr says. “There isn’t a vaccine anytime soon. Nature will overtake this and people will take their chances. California is starting to get licenses and permissions for certain shows to start happening. None of the big ones have done that yet, but once that happens, the floodgates will open.”