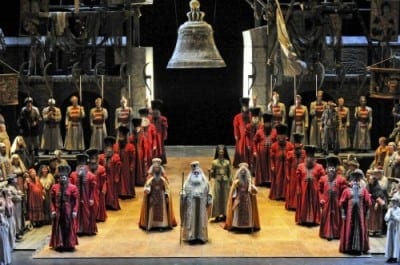 Dallas — Is it about leadership? Local wealth? Ambition? It’s curious to observe how an art form will power forward in one location while the same art form, in what ought to be a peer city, continues to struggle. From every angle, the Dallas Opera is making a confident bid to join San Francisco, Chicago and Houston among the country’s top-league opera companies. Included in that strategy is courting the national press to witness (and report back home) on the remarkable growth in Dallas.

At the same time, it’s impossible not to contrast the strides taken in Texas with the perpetual catch-up played by the Atlanta Opera. Dallas holds many lessons and ideas for Atlanta. The Dallas Opera’s chief executive officer has even worked intimately with the Atlanta Opera.

We’ve documented the Atlanta Opera’s tremendous artistic growth in recent years. Many of its productions now are nicely sung and solidly produced. But the Cobb Energy Performing Arts Centre — a huge improvement from past venues — is adequate, not great, for opera, and the company produces just three shows a year. Atlanta remains ridiculously underserved in opera.

Is it fair to compare opera in Dallas with Atlanta? For many reasons, yes. Both cities are largely new, loaded with recent arrivals, and are said to be culturally conservative and searching for an agreed-upon identity. Both cities are addicted to unhelpful boosterism. Both are home to massive wealth, several ostentatious billionaires and many Fortune 500 companies. Both have had serious venue problems, although Dallas has taken the undisputed lead in that key area.

Just as impressive, Dallas has a glittery and intimate new opera house, the Winspear, which opened in the fall of 2009. It’s one of the latest components of the arts district, where each cultural institution stands alone, with unique architecture, in a manicured gulch surrounded by highways on three sides and downtown skyscrapers on the fourth.

Last spring, capping the first season in the new opera house, the company gave the world premiere of “Moby-Dick” by composer Jake Heggie and librettist Gene Scheer. Dallas co-commissioned the work, and it proved a popular and critical hit. Earlier this month, Dallas brought back Heggie and Scheer for a commissioned song cycle, “A Question of Light,” inspired by works in the Dallas Museum of Art. Over the same weekend, the opera performed Verdi’s “Rigoletto” and Musorgsky’s “Boris Godunov,” the Russian epic, in the much-admired 1983 production by cult filmmaker Andrei Tarkovsky.

The Dallas Opera has a new general director, Keith Cerny, who’s been on the job 10 months. He has followed an interesting path: a physics and music major at UC Berkeley, an MBA from Harvard, a pianist and vocal coach in London, and chief financial officer of the San Francisco Opera. He has even done pro bono work for the Atlanta Opera and Charleston’s Spoleto Festival, between 1995 and 1998, when he worked as an economist and management consultant for McKinsey and Company.

Cerny’s core mission for the Dallas Opera is twofold. Publicly, he’s helping steer the company to broaden its repertoire. “All opera companies face the trade-off,” he told me, “whether to focus on the familiar, with a certain level of safety in ticket sales and contributions but a loss of ambition and reputation, or face the huge economic ramifications of moving away from the top 12 operas. Dallas is conservative in many ways, but it has high artistic standards.” He’s not talking about the occasional English-language rarity, but a decisive step toward expanding the company’s repertoire, with the resulting boost in artistic reputation.

One solution is chamber opera, starting in 2012 with Peter Maxwell Davies’ spooky “The Lighthouse,” in a co-production with the Dallas Theater Center at the Wyly Theatre (which opened at the same time as the opera house, just across the street). At about $300,000, “The Lighthouse” is expected to cost just a fraction of a mainstage production. The opera and theater will share expenses and fund-raising. Tickets prices will be kept low to entice opera novices. And the risks are reduced for everyone, because the unfamiliar work can break even at the box office without having to sell 11,000 seats, across five evenings, in the Winspear Opera House. (An Atlantan might wonder how often the divisions of the Woodruff Arts Center seriously collaborate. Never?)

This scheme taps a rich vein of repertoire, going back to the great operas of Monteverdi and Handel and lesser-known Mozart to 20th-century classics, from Britten’s “The Turn of the Screw” to Thomas Ades’ “Powder Her Face.” Cerny enthused to me about the chamber version of Alban Berg’s “Wozzeck,” which he saw in the Bay Area and finds devastatingly effective as an evening of operatic theater. In the Winspear, the company will also launch a concert opera series next season, starting with a lights-and-projection production of Wagner’s “Tristan und Isolde.”

“Dallas needs its ‘Carmens’ and ‘Aidas,’” Cerny said, “but it deserves to see ‘Nixon in China’ too, which took 25 years to go from edgy to an accepted masterpiece that’s poised to enter the repertoire. It’s smart and a lot of fun.”

Part of what drives collaboration in Dallas, he said, is “interlocked arts boards — I’m talking about major-level board members — who can share a vision for the city’s artistic growth. They have an incentive to work together, and in most cases they have a strong economic background. The donor community wants very detailed explanations of the economic and artistic impact of each proposal.”

That, said Cerny, is why he was hired as the Dallas Opera’s CEO. His primary role is to help the opera deal with the economic impact of moving from the 3,400-seat Music Hall at Fair Park to the 2,000-seat Winspear, where the company has to give more performances to maintain earned income. Cerny is managing the opera’s $3.5 million debt associated with the move, and he spends much of his time explaining the financial models to the board of directors. “They’re sharp and they’ve very focused on goals and on numbers,” he said of the Dallas Opera board. “I do a lot of economic analysis.” (When the Atlanta Opera moved from the 4,500-seat Civic Center to the 2,750-seat Cobb Centre, did it have this level of expertise on hand? One wonders, because the Atlanta Opera, two years after the move, cut back from four annual productions to three. Atlanta blames the recession; somehow Dallas has mostly steered around it and is thriving.)

None of this would matter so much if the Dallas Opera’s artistic product wasn’t high — and getting better. Following the opening of the Winspear, in 2009, Music Director Graeme Jenkins told me, “I predict that in five years’ time we’ll rival San Francisco and Chicago in artistic quality.”

Decades ago, the Dallas Opera was known primarily for Italian opera. Under Jenkins it has become multicultural, excelling in the corners of the repertoire (like a superb Janacek “Kat’a Kabanova” I saw there a decade ago) and gaining artistic heft every season.

Tarkovsky’s widely traveled production of “Boris Godunov” makes the case for stage directors who are artistic peers of the creators. The slow-glowing saga of the tsar whose murderous act puts him on the throne but erodes his sanity is often overdirected and, in the process, muddled. Musorgsky’s orchestra has a raw power that’s almost entirely in support of the vocal lines. Each scene fades to black at the end, foreshadowing modern cinematic techniques.

These elements suited Tarkovsky, who died in 1986. Here his original assistant, Stephen Lawless, now a well-regarded director in his own right, took charge of the production. Tarkovsky’s brilliant quirks were in place, with garden statues that move, slow-motion effects from the chorus and characters at once vulnerably human and allegorical. At the back of the set, amid the rubble that is never cleaned up, is a great unfinished arch, a symbol of Boris’ promising but stagnant reign. The production is alert to the score and keyed into the text, on many satisfying levels.

Although Boris’ Coronation Scene felt sonically scrawny under conductor Jenkins, with amplified church bells blaring from loudspeakers in the top balconies, the dramatic moments were intense and the opera often very beautifully sung. Many of the singers, scouted three years ago by Artistic Director Jonathan Pell on a trip to Russia, sang in their native language.

Mikhail Kazakov’s Boris, Evgeny Akimov’s Grigory and Mikhail Kolelishvili as the vagabond monk Varlaam were thoroughly convincing in their potent roles. A few singers with Georgia connections, including Susan Nicely as the Nurse — the Atlanta Opera’s Julia Child in “Bon Appetit!” — held their own in this densely populated production.

As Marina, mezzo Elena Bocharova, a Russian who trained and lives in the U.S., sang in creamy lovely tones but with an occasional hooty quality that made her seem more bratty than regal. In this characterization, the Polish princess was still a callow girl. Her immaturity made her believably vulnerable to the reptilian, outrageously charismatic Sergei Leiferkus as the scheming Jesuit Rangoni.

There were some vocal discoveries, too. In Russia, Pell heard young soprano Oxana Shilova and was immediately smitten. But he told her agent that he couldn’t justify flying her over just to sing the small role of Xenia, the tsar’s daughter. Shilova made it anyway, and sang with the most fetching and memorable voice on the stage. Remember the name.

For its 2011 Gala, the opera first contracted baritone Nathan Gunn to sing a recital. The Winspear is intimate enough that a singer and piano never feel swamped, and the baritone’s velvety chestnut voice was flattered by the acoustic. With Gunn in place, the opera approached Heggie and Scheer for a song cycle in honor of philanthropist Margaret McDermott, a major donor to the opera, the orchestra, the art museum and much else.

The composer and librettist toured the Dallas Museum of Art, just down the street, and surveyed works donated by McDermott or her friends. The result was the six-movement “A Question of Light,” lasting about 20 minutes and covering an emotional range from sparkling and watery (“The Light of Coincidences,” a Rene Magritte trompe l’oeil painting) to poignant and melancholy in “Watch” (based on an art deco Gerald Murphy painting).

Most of the art touched off memories and ideas in Scheer, so the falling petals in Gustave Caillebotte’s “Yellow Roses in a Vase” triggered thoughts of the poet’s dying father. Heggie’s music is above all singable, expressive, melodically mild and beautifully crafted.  It all fits together very well, even as none of the parts are especially memorable.