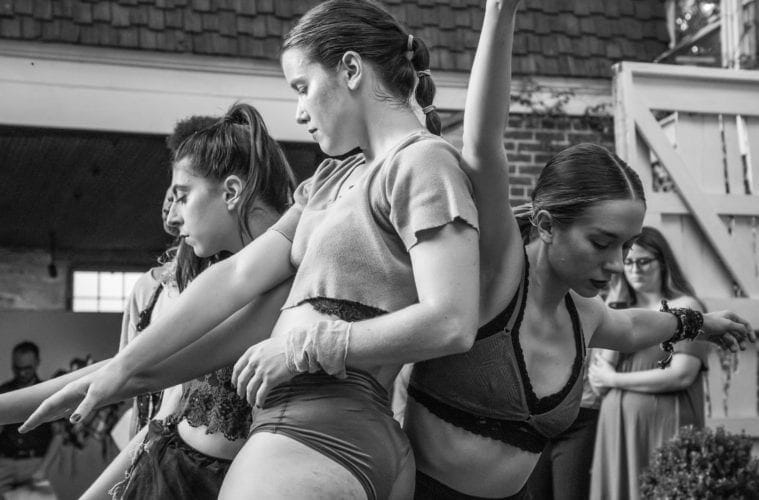 For anyone born in the age of digital streaming, a mixtape is a foreign concept. The late-twentieth-century relic referred to a cassette tape or CD compilation of songs by different artists. Today, the term is applied to digital playlists, or in the case of Zoetic Dance Ensemble, an approach to programming a dance festival.

Zoetic’s MIXTAPE 2019 will present dance works by 15 artists at the Southwest Arts Center this weekend, June 14 and 15. With a different lineup each night, artistic director Mallory Baxley says shuffling their playlist provides an inclusive platform for different voices to celebrate the feminine spirit. Standouts in the lineup include Corian Ellisor, Porter Grubbs and Fuerta Dance.

Baxley joined Zoetic in 2010 under the mentorship of Melanie Lynch-Blanchard and Candess Giyan. After taking the reins in 2015, Baxley continues to present work with a raw, gritty femininity. Zoetic’s contribution to the summer MIXTAPE includes Sarah Wildman’s Memoirs of Millennia, Cherrise Wakeham’s Femme Futura and Baxley’s She Walks Into the Night. And I Am Crying, a piece that details Baxley’s passage into womanhood. ARTS ATL spoke with Baxley about that journey and how Zoetic cultivated MIXTAPE.

ARTS ATL: What has Zoetic taught you about being a woman?

Mallory Baxley: The first show I saw in 2007, Dirty Pretty, made such a huge impression on me because it was centered on women and the female experience. I knew I wanted to dance with Zoetic, so when I had that chance, it was inspiring from day one — being in the studio with the women who were 10 to 20 years older than I was. Zoetic has always been collaborative, with a lot of different bodies and styles thrown into the mix. I learned a lot about self-confidence and my self-worth. I tried to open myself up to accepting my femininity and accepting myself as a woman, which can be incredibly challenging, especially in today’s society. Being able to voice my opinion, give feedback, create work and eventually run the company was one of the best gifts I’ve been given. My goal now is to provide the same experience and opportunities to the women that dance with Zoetic now and for generations to come.

ARTS ATL: Looking at the branding and the movement, it all seems very fierce — rock ‘n’ roll, rebel chic. How does that fit with the idea of mixtapes and putting things together with a musical sensibility?

We originally launched the MIXTAPE program in 2016 and wondered how we could make this program bigger and better and reach out to people that align with our vision. The title “mixtape” is an homage to being true to what we like while trying to challenge ourselves to step outside of our box. Music is a huge inspiration for all of us, and we try to push the boundaries — of what kind of music we’re performing to and inspired by. It really is a true mix of voices and flavors and sounds and images.

ARTS ATL: How did you go about choosing the works that have been included in MIXTAPE 2019?

Baxley: Beyond just women, we felt it was important to open the door for anyone. As an all-female company, sometimes people can feel intimidated or excluded from that idea, so we wanted to create a really inclusive experience. We reached out to members of the LQBTQ+ community who have felt similar prejudices and been marginalized in the same way women have. The response was inspiring and uplifting. We had a great team of adjudicators who read through the applications. We evaluated each artist on many factors, but the main idea focused on body, soul and truth as it pertains to the feminine perspective.

ARTS ATL: Body, soul, truth. What made you choose those words? Baxley: We wanted to make our mission clear, with what we were trying to do and what this show was focusing on. There are so many dynamic layers and issues to the feminine perspective that we are inspired by. So as we were brainstorming ideas, it came down to our vessel — our bodies, how we use them, how we feel about them and our relationship with them. Then that went deeper, below the surface, thinking about soulful experiences and living our truths.

ARTS ATL: Are there other words you would use to describe what you expect this MIXTAPE to provide to the Atlanta community?

Baxley: Beyond just trying to uplift the female experience and advocate for empowerment, inclusivity is really important to us — inclusivity, empowerment, femininity and equality. Those are really big for us. As we’ve developed MIXTAPE over the past year and a half, we wanted to shift it away from just women and say what’s at the heart of our womanhood and femininity. We are advocates for equality across all spectrums of gender, race, everything. We want to provide an inclusive environment where we can have meaningful conversations.