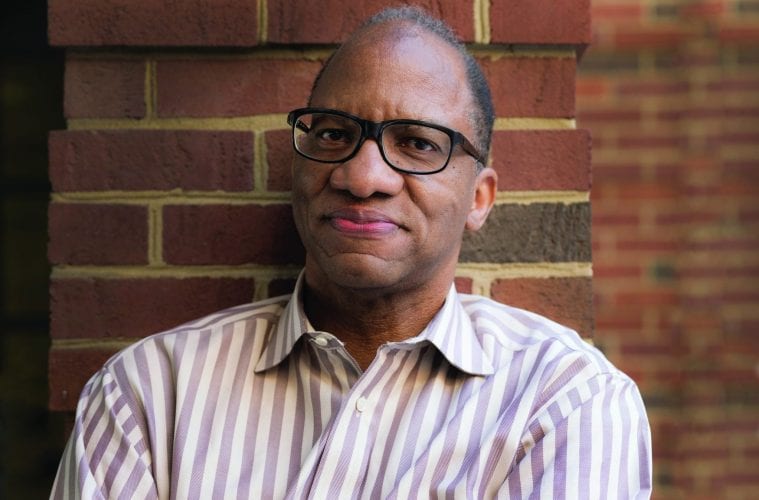 Wil Haygood was born in 1954, the year Thurgood Marshall won the Supreme Court case Brown v. Board of Education, which declared segregation in public schools unconstitutional.

When the journalist and historian — whose book about White House butler Eugene Allen, was made into the movie, The Butler — decided he wanted to write about the biggest figure from his birth year, the civil rights giant was the clear choice.

Marshall, who started the NAACP Legal and Educational Fund in 1940, was the first African-American to serve on the Supreme Court. His confirmation hearing, which started in room 2228 of the New Senate Office Building on July 13, 1967, was the longest up to that point and was among the most acrimonious.

Haygood, who will deliver a Livingston Lecture at the Atlanta History Center on September 18, spent five years researching and writing Showdown: Thurgood Marshall and the Supreme Court Nomination That Changed America, an untraditional biography that focuses on the drama and tension surrounding the confirmation.

President Lyndon Johnson, who had played an elaborate chess game to create an open spot on the court for Marshall, then went to battle with Southern senators, many who were once his friends, who considered Marshall “a public enemy of the South.”

ArtsATL: You have written biographies about Sammy Davis, Jr., Sugar Ray Robinson, Adam Clayton Powell, Jr. and, most famously, the White House butler Eugene Allen. What inspired you to write a book about Marshall? Wil Haygood: Lawyers spend a lot of time in their offices, but Marshall spent a lot of time out in the field, in the South, way before the 1965 Civil Rights Act. He had faith in the ultimate moral muscle of this country, even while drinking out of separate water fountains and staying at segregated hotels. His faith never dimmed. That’s very powerful. When he won the school case in 1954, there was a wave of resentment, and many of those schools stayed all white. And he went back and filed more lawsuits against school districts. He stayed the course.

ArtsATL: How did you piece together the story when many of the people who were around at that time are dead?

Haygood: It took a lot of research. One of the wonderful things about segregation is that there were all of these great African-American newspapers. When the white media wouldn’t write about Thurgood Marshall arriving in Tampa, Atlanta, Houston or Chicago, the African-American newspaper would, and many of those journalists were Marshall’s age. They went out to eat and hung out together and they had these astonishing insights. They are more reliable, in some cases, than people’s memories.

ArtsATL: Were people hesitant to talk to you about the machinations at the White House surrounding Marshall’s confirmation?

Haygood: There are many people who don’t think President Johnson has been given his due when it comes to civil rights because he was overshadowed by all of the pain from the Vietnam War. So, when I started knocking on people’s doors, they were happy that I was telling an almost unknown story of the behind-the-scenes things that happened to get Thurgood Marshall onto the Supreme Court.

President Johnson had signed the 1964 Civil Rights Act and 1965 Voting Rights Act, and the nomination of Marshall was the final nail in the coffin of white supremacy. There was this great drama taking place in the White House against the backdrop of riots and protests. It was a wonderful canvas to write about.

ArtsATL: What are you working on next?

Haygood: I’m not ready to talk about [my next book project] yet. I would love the opportunity to take a crack at writing a script for Showdown. I wrote a script for Denzel Washington when he bought the rights to my Sammy Davis, Jr. book, and that script was sold to Hollywood, but the movie never got made. Now, Lee Daniels owns the movie rights to that book.

ArtsATL: Are there plans to turn this book into a movie?

Haygood: There is Hollywood interest. I think it would make a wonderful five-part miniseries, since the book floats across five days. Forest Whitaker would make a great Thurgood Marshall, but I’m slightly biased. [Whitaker played Eugene Allen in The Butler.]

I feel fortunate to be able to tell this story at this time when we’re dealing with housing rights, equal pay, voting rights, Black Lives Matter — all of these things have been talked about throughout history. Hopefully, it will ignite more discussion about history, race and equality in the United States.