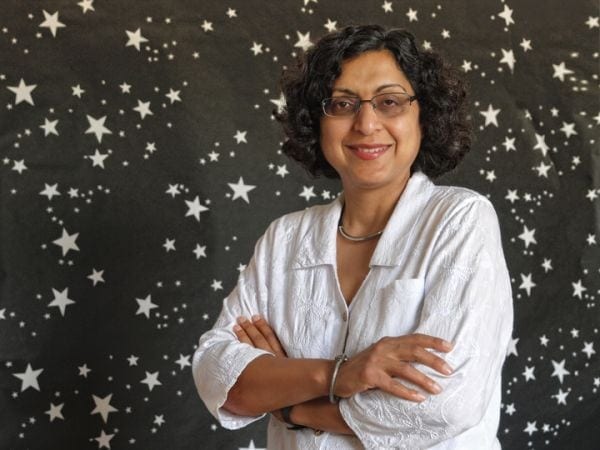 As metro Atlanta becomes more international, so does the AJC Decatur Book Festival.

The Global Voices Track, new this year, is a response to the wealth of “hyphenated” writers who reflect their complicated identities in their works as well as readers who want to see something of their own lives and stories in the books that they and their children read. Program Director Philip Rafshoon says the new track also represents the increasing curiosity of the general reading public.

Among them is Thrity Umrigar, an Indian American journalist, critic and bestselling author. In her most recent novel, The Story Hour, Umrigar returns to a signature theme of friendships and betrayals between women from different backgrounds.

ArtsATL: How did you get the idea for The Story Hour?

Thrity Umrigar: The Story Hour actually began as a combination of two different short stories written several years apart. Then I thought of bringing together the protagonists of each story — Maggie [a middle-class African American psychologist] and Lakshmi [a young immigrant bride from a village in India].

ArtsATL: And the title?

Umrigar: My working title was It Begins. Then I thought of Laskshmi’s Hour because of the hour of therapy she has with Maggie each week, and from there it evolved into The Story Hour because what ultimately is talk therapy if not telling a story of your life, and, with the cooperation of the professional therapist, allows you to build a new story, which, presumably, enables you to change your reality?

ArtsATL: Maggie sees the therapy hour as a job whereas Lakshmi sees it as friends getting together for a soul-to-soul chat, which is apropos to the Indian culture where family and friends serve as listeners and advisers.

Umrigar: We Americans have professionalized what used to be family and friend obligations, but there is a great use to having a professional listening . . .

ArtsATL: In professional therapy there’s no personal involvement, while friends and family may be affected or have ulterior motives with advice. That said, therapy does not replace the role of friends.

Umrigar: It is certainly not a replacement for human bonds and connections, and, also, therapy is a very culturally bound concept. In my novel The Weight of Heaven there’s a passage where the American character, Ellie, wants to help the beleaguered Indian villagers, but she realizes that every therapy she might suggest is a white middle class offering, and none of that makes sense in their cultural context . . .

In The Story Hour, Maggie’s husband, Sudhir, is from a well-educated upper-middle-class family, and yet [family members’] notions of therapy are shaped by Woody Allen movies in that they think therapy is something to giggle about. An indulgence.

ArtsATL: Lately we are seeing more racial cross-over voices such as George Weinstein’s Mexican protagonist in The Five Destinies of Carlos Moreno, and Clifford Garstang’s Chinese protagonist in What the Zhang Boys Know, and Nell Freudenberger’s Bangladeshi protagonist in The Newlyweds. In The Story Hour Maggie is African American. As an Indian American, how did you find the courage to channel Maggie’s voice?

Umrigar: I claimed the courage to do so. I didn’t ask anybody for permission or go to any department and say “Please Sir, as a person of Indian origin am I allowed to write from a different race?” I feel that if men can write about women and vice versa, and we can all write science-fiction about UFOs and space aliens, then surely we should be able to write about each other.

It’s interesting how this question did not really arise with The Weight of Heaven where the two main characters are white Americans but that it does because Maggie is African American. I understand all the academic debate about co-opting somebody else’s culture or voice, but I wasn’t writing a novel about African American culture per se. I am writing a novel where one person happens to be African American. I don’t want little pieces of humanity to be doled out to certain writers. I claim all of it, and the right to write about it. When did things get so bad in this country that we are scared to step into each other’s shoes?

Maggie was an easier character for me to write, paradoxically, than Lakshmi because I could relate to Maggie’s middle-class background. I have nothing in common with Lakshmi, who is an eighth-grade-educated girl from a village in India.

ArtsATL: The subversion in The Story Hour is how patriarchy and arranged marriages damage men and infringe on their rights as individuals, too, and not just women, the more traditional take. Umirgar: I wasn’t really trying to weigh in on the arranged marriage question . . . but one of my core beliefs is that oppression in any form hurts both genders whether people know it or not. Every time a man heckles or misbehaves in any way it actually damages him also.

ArtsATL: However, the fact remains that sometimes he neither sees the damage to himself nor does society require him to see it. In the case of a woman, she and society both perceive her as “damaged.”

Umrigar: True. My larger point is human beings are such complicated creatures and that even honorable and good men and women act in ways that they wouldn’t if they were perhaps in different situations or had more economic opportunities.

Umrigar: The cultural misunderstandings that hound the women in The Story Hour do not exist between the protagonists in The World We Found despite their differing religious backgrounds because the Indian women share a class background which translates into fewer chances of missed connections. I think The Story Hour’s central conflict compares to that in my novel The Space Between Us where the relationship between the servant Bhima and employer Sara ultimately asks whether they will side with their class or with what is right and just. Same with Maggie and Lakshmi.

ArtsATL: Lately there is so much more awareness for the need for diverse voices and stories. You have been publishing for over a decade. What changes do you see in reader awareness and acceptance of different stories and voices?

Umrigar: There is no question that the eagerness to read stories from different cultures is only going up. Salman Rushdie’s novel Midnight’s Children began an interest in diverse literature, and then Khaled Hosseini’s novel The Kite Runner converted that interest in other cultures into a mass phenomenon. I think for people of color and minority cultures here in America, it’s a good time to be a writer.​

Umrigar will speak at 3 p.m. on August 30 at the Marriott Conference Center, Ballroom A.