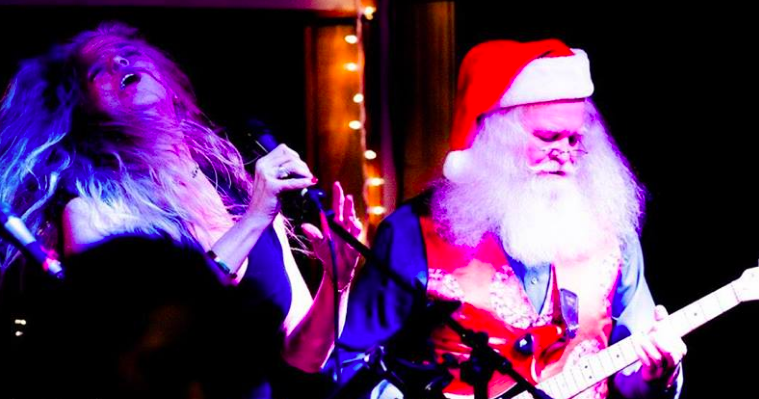 Founded and curated by Teresa Lynne, Divapalooza is an annual charity show put on by the finest local female performers. The show returns for a fourth year this Sunday at the Vista Room to provide an evening of sonic pleasure, positive spirits, giving back to the community, food and drinks. Because after all, who says charity events can’t be fun.

Divapalooza provided more than 14,000 meals last year and hopes to raise funds for more than 25,000 this year for the Atlanta Community Food Bank, a nonprofit organization that strives to build a stronger and healthier community free of hunger. Lynne is no stranger to the local music scene, being the front woman for Runway 27 and providing support for female musicians in Atlanta. ArtsATL had a chance to talk to the goddess of giving about her inspirations and goals behind the annual show.

ArtsATL: How did Divapalooza begin?

Teresa Lynne: I have always enjoyed doing things for people who are less fortunate and helping organizations that help people. I called several organizations asking to volunteer, and surprisingly, they were full or booked up. I guess so many people just like to help people that the charity organizations have plenty of volunteers. After calling several places and seeing that they didn’t need me, I thought of the Atlanta Community Food Bank. I had been involved with the Atlanta Community Food Bank in the past, and I thought it would be nice to raise money for them. I thought the best way to do so was to combine giving back with what I love to do, which is be on stage and be with other artists. I called Steven Grossman, who at the time worked at Steve’s Live Music — which is now Darwin’s Burgers & Blues — and asked if I could gather a group of female artists to do a diva show and raise the funds for the nonprofit, and thus, year one of the show took off. The second year we started having sponsors, which helped the show really evolve. This year’s sponsors include Big Green Egg, who have donated one of the grills to be raffled on; Madison Records; Fryer Law Firm and more. The Vista Room donates their venue to us, and they are such good and nice people. Everything about it, the food, drinks and setting, is amazing. To me, it’s the best show in town. The artists that donate their time and talent are absolutely incredible, too. Runway 27 will performa at Divapalooza (Courtesy of Teresa Lynne)

Lynne: This year, we’ve got my band, Runway 27, Prisca, Rita Graham (this is her first year), Jess Goggans (you’ve literally got to see her in action), Sami Michelson and others. Each of these performers blow my mind.

ArtsATL: Is there a reason behind having all female performers in the show?

ArtsATL: In addition to raising money for Atlanta Community Food Bank, what are other goals of the show?

Lynne: It’s not just about doing something big and grand, it’s about doing something every day that’s nice and showing kindness. We need kindness in this world more now than ever and to stand up for people who can’t stand up for themselves. We’re talking 1 in 7.5 people that live in metro Atlanta and North Georgia turn to food pantries and meal service programs. I don’t know if you’ve been to the Food Bank, but it runs like a well-oiled machine. Atlanta Community Food Bank distributes to organizations that feed people. They donate their time, goods and money from all over the country, and they serve high-quality food, not just whatever they can find. They educate people on how to make food, nutrition and statistics. It’s empathy and compassion that matters most and exercising that in our behavior each day, regardless of who it is toward. It’s about charity, and it’s about fun.

ArtsATL: How can the community become more involved with the show and helping out in general?

Lynne: This year, our goal for Divapalooza is to raise 25,000 meals. Last year, we raised enough money for 15,000 meals. One ticket is $20 — that’s 80 meals; $1 makes four healthy meals. It really is about helping our neighbors and humanity. When you see people on the street struggling, give them what you can, touch them and ask their name. There are so many grassroots organizations to become involved in. Compassion Atlanta is a big one, because as a community, that’s often what we lack: empathy. It’s finding local organizations, volunteering and talking with people. Be kind to people every day, but support even if it’s just giving $5 to better causes. But make sure to educate yourself before giving to make sure the organization is genuine. Be present with people, smile at a stranger and seek to be curious about people’s experiences rather than judgmental.