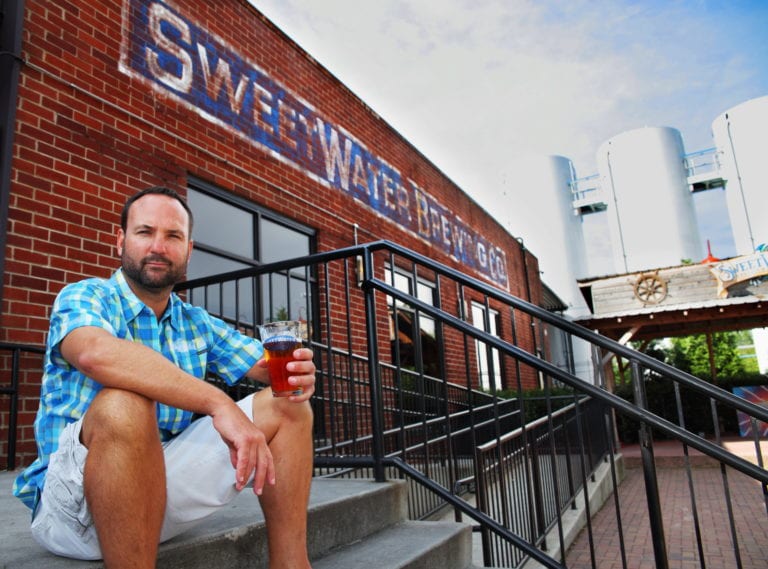 SweetWater Brewing Co. cofounder Freddy Bensch never floated the mainstream. After graduating college in Colorado, he moved to Atlanta to start the brewery with Kevin McNerny in 1997. SweetWater has always focused on quality brews and ways to help the environment. But a few years later, Bensch added his love of music to the recipe to create the annual SweetWater 420 Fest.

What started as a small outdoor park gathering in Oakhurst has grown dramatically into a celebration of music, beer and cheer spanning three days at Atlanta’s Centennial Olympic Park on April 19–21. This year, Widespread Panic, Avett Brothers, Jason Isbell and the 400 Unit and many more will perform.

While 4/20 is slang for many of cannabis culture, the date has a much deeper meaning to the brewery. SweetWater’s flagship beer, 420 Extra Pale Ale, was birthed 22 years ago on April 20. Though the beer wasn’t the first brewed, it would go on to be the company’s most profitable. ARTS ATL caught up with Bensch to discuss why Atlanta was chosen as the brewery’s home and what SweetWater 420 Fest is all about.

ARTS ATL: Why did you choose Atlanta as the home for SweetWater Brewery?

Bensch: I stopped here during a road trip after I graduated from University of Colorado Boulder — it was during the ‘96 Olympics. I fell in love with the energy of the city and all the outdoor recreation opportunities that are in the metro area. We felt that our west coast style of brewing — which I’d learned while working in Colorado breweries during college — would be well received in the Southeast. I felt confident enough to invest everything we had into opening SweetWater Brewery in Atlanta.

ARTS ATL: Though you opened the brewery in 1997, the first SweetWater 420 Fest didn’t take place until 2005. Was 420 Fest always a part of the vision for the brewery, or did that develop sometime after the brewery’s inception?

Bensch: We first brewed our flagship 420 Extra Pale Ale on April 20, 1997, and definitely celebrated that day every year after. We used to do pub crawls around parts of ATL, complete with a marching band and brownies. We’ve always been incredibly grateful for the support that Atlanta has given the brewery and felt the festival was a real cool way to give back and say thanks to everyone that has made this pipe dream real.

ARTS ATL: SweetWater 420 Fest began with a crowd of 3,000 in the small park of  Oakhurst and has since grown dramatically and moved to the 21-acre Centennial Olympic Park. To what three things do you most attribute the continual annual growth of the festival?

ARTS ATL: Why is SweetWater Brewery involved in and committed to environmental awareness?

Bensch: Conservation and preservation of our natural resources has always been a personal passion and an integral part of SweetWater — it started with us giving free beer to volunteers at Chattahoochee Riverkeeper clean-ups and has now evolved into our Save Our Water fundraising efforts. More than $1 million is given to nonprofit partners like Waterkeeper Alliance, Trout Unlimited and Bonefish & Tarpon Trust. We’re expanding on that this year with our Guide Beer lager — 11% of profits will be given to nature guides in need, whether they are affected by a hurricane, illness or injury. It’s our way of giving back to the best stewards of the great outdoors.

ARTS ATL: For those who have never experienced SweetWater 420 Fest, give a few words you might use to describe the possibilities in store.

Bensch: Three days in the heart of Atlanta with more than 50,000 people jamming to over 50 like-minded bands while enjoying the headiest brews around. Rest up for this year because Widespread, Avett Brothers, Jason Isbell and the 400 Unit and tons more [are performing] every day. It’s an epic lineup.

ARTS ATL: How do you feel SweetWater Brewery has contributed to the Atlanta music scene?

Bensch: I’d like to think we’ve contributed to Atlanta’s music scene in a few ways. Most importantly, we’ve always done it our way; the authenticity of the festival has always been paramount, just as it is with anything we do at the brewery. This started as a give back to thank all of our supporters — it’s been about throwing a huge, kick-ass party that showcases the true fabric of SweetWater and the folks behind it. We’ve also given up-and-coming bands a platform to play in front of a few hundred people each weekend on our taproom patio.

ARTS ATL: How would you like SweetWater’s legacy with regard to Atlanta’s music scene to be described 20 years from now?

Bensch: I’d like us to be remembered in regards to the Atlanta music scene as hosting one of the nation’s best fests each April in Centennial Olympic Park, with over 50 bands ranging from local “battle of the bands” winners to Widespread Panic.