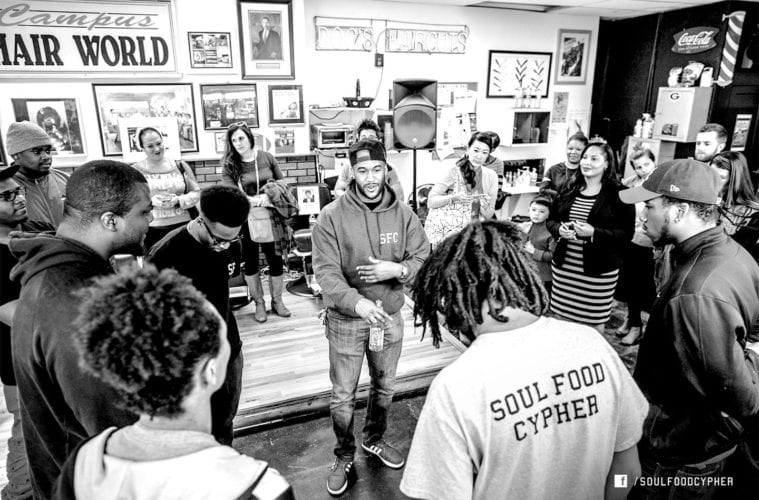 Soul Food Cypher comes together the fourth Sunday of every month.

Alex Acosta was born on the hip-hop solstice. He is one of the founders of Soul Food Cypher, a society of freestyle rappers that build community, celebrate the richness of the hip-hop tradition and educate on the art of improvisation. The group comes together on the fourth Sunday of every month to host freestyle rap sessions. The next event is this Sunday, April 28, at the Annex Bookstore at 6 p.m.

Cofounders Mark Montgomery, Zano Bathroom, Wahid Khoshravani and Majorca Murphy joined Acosta in 2012 to create something bigger than a showcase of performance art. The group’s work extends deep into the community through educational school programs and interdisciplinary partnerships.

Soul Food Cypher is inspired by other cyphers (groups of freestylers) like Freestyle Fellowship at the Good Life Cafe, which is known for its open mic nights that helped the 1990s Los Angeles alternative hip-hop movement flourish. Acosta says freestyle often lacks permanence, and it is his hope that Soul Food Cypher will bring a home base to the art form. By building community through shared vulnerability of improvisational expression, Soul Food Cypher brings the roots of hip-hop culture to the next generation.

ARTS ATL caught up with Acosta to learn about empathy and understanding through freestyle rap, the influence of hip-hop on the world and his drive to change social misconceptions of MCs.

ARTS ATL: Where did the idea for Soul Food Cypher come from?

Acosta: Back in 2011, I began mentoring kids in photography at the Intel Computer Clubhouse in Edgewood, but the real way that we were able to connect was through a shared appreciation of rap and hip-hop culture. I would host cyphers and teach the kids about hip-hop. I was also freestyling with friends. Then I had an idea: Why not create a safe and nurturing place where this art form could continue? There was no place where there was just a continuous cypher. 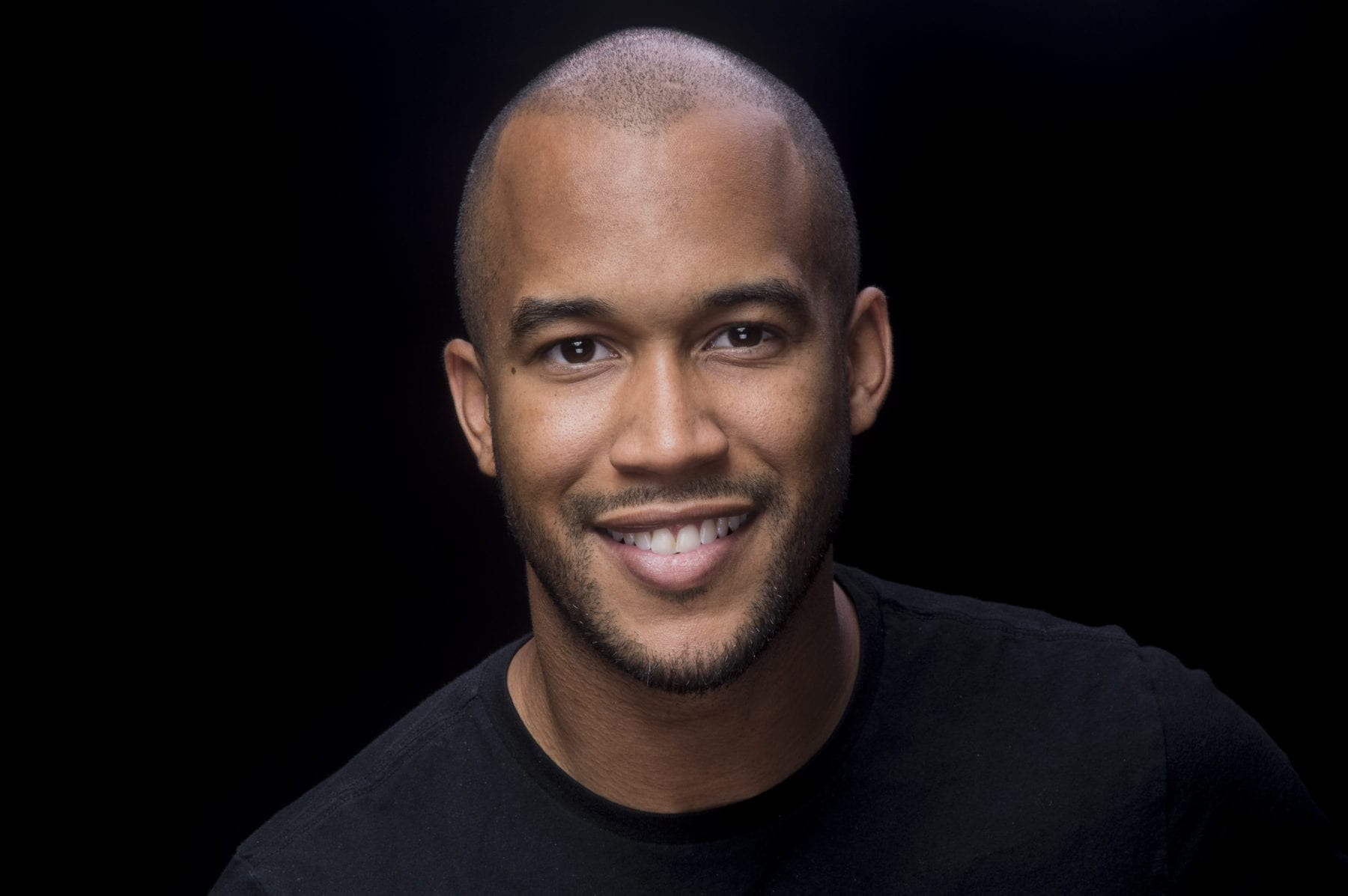 We hosted our first cypher on February 26, 2012. And that was an ominous moment too because I feel like that’s the night that changed everything in America, unfortunately. It was the night that Trayvon Martin was murdered. I get chills because what we created was a place in which people could come together and share their ideas and have shared experiences. One of the things that I love about the arts is that they provide empathy. In this country, I just think that there’s not enough empathy because we don’t understand each other’s stories. We don’t have shared experiences because of division, race, location and social economic issues. Nowadays, so much of our attention is divided. When you’re in a cypher, critical thinking and listening skills are at their height. You are stopping and you’re listening. And then you’re also paying attention to other individuals, and in return, they will listen to you. Where else does that happen nowadays?

ARTS ATL: What is a cypher, and how is it tied to hip-hop?

Acosta: A cypher is a circle in which an art form takes place, and a lot of time that art form is being improvised. A popular example is whenever you see break dancers doing street performances. They have people get together in a circle, and then each of those break dancers takes a turn. Each of those artists displays their originality, and each one has their own twist. The energy continues. It’s a line that never stops. A cypher is a perfect example of democracy because everybody’s eye-leveled. Everybody has the opportunity to step in. Everyone’s voice is heard. You hear call and response. You get instant feedback.

It’s also deeply tied to African art forms including drum circles and ring shouts. It’s something that was brought over here from Africa. Different people’s voices can be heard, and different cultures can be appreciated. We are talking about the improvisers’ arts. We have our direct lineage to jazz musicians when we talk about their ability to improvise on the spot and the intellectualism as well. It’s tied to mechanisms of black survival in America. It’s something that can be appreciated by all, but I feel like it’s deeply embedded within the African American experience. For me, we tie our lineage to such a rich tradition and pay respect to them.

ARTS ATL: Was there a moment that pulled you into hip-hop?

Acosta: The genesis point for hip-hop culture is August 11, 1973. Kool Herc (DJ Kool Herc is the inventor of the merry-go-round technique) threw a big party. He was a Jamaican immigrant who brought the sound clash culture through large speakers and something called toasting. They would recite rhymes, and they would toast to the crowd and give them cues. So I always tell people that I was born to do this because I was born on August 11.

There are other genesis points for hip-hop, especially in the South. James Brown was heavily influential. He gave birth to break dancing and put the in-between moments on the record. Rapping was associated with just talking, especially hip talking. There have always been echoes of rap music in my life. 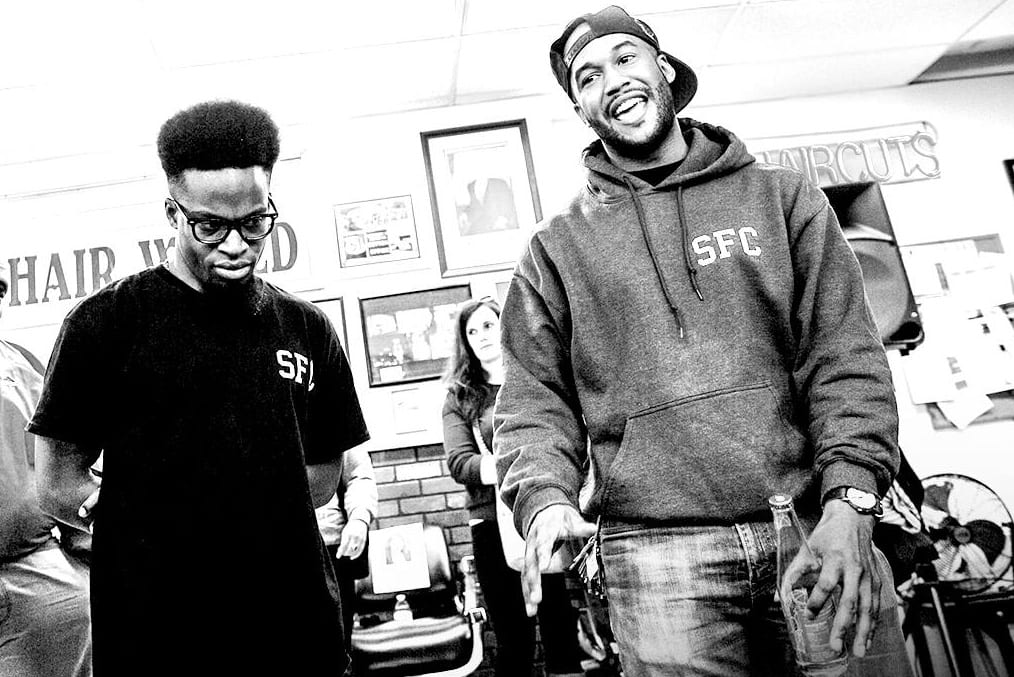 ARTS ATL: What musical elements are important to an MC’s style?

Acosta: I would say flow — flow is how you ride the beat. One of the dopest flows on a mainstream level is Schoolboy Q. Cadence is very important, which is how you say things. And message is very important. Ghostface Killah is one of my favorites. He was rapping like Salvador Dali — very esoteric and colorful. One of the best poets and rappers is Nas. He’s going to put ideas and knowledge in your mind that will spread across the world. It’s so poetic. It was a voice for the voiceless.

With style, we have to talk about influence. There’s a negative connotation with rappers, and I think it’s deeply embedded with racial politics in America. But if you were to look up on Google right now just the term “rapper,” more than likely you’re going to see either a rapper who’s done something incredibly stupid, a rapper who is going to jail or, the worst-case scenario, a rapper who is dead. But to me, rappers are some of the most creative individuals. Their style has the ability to influence, and that’s part of what we want to do with Soul Food Cypher — just reconstruct the narrative of what an MC is. And to me, James Brown was a rapper, Martin Luther King was a rapper and Muhammad Ali was a rapper — people who use their voice to influence and to change the world.

ARTS ATL: How do you see Soul Food Cypher growing?

Acosta: We want to form strategic partnerships with brands outside of hip-hop culture so that we can extend our mission and showcase freestyle rap as a legitimate art form. We partnered with the Atlanta Symphony Orchestra, and it was the first time they worked with hip-hop. It was for a children’s story called Jump: a cultural symphony. They wanted to provide a new voice for the narrative, and Micah Brown came to mind. He is a father of three young daughters and has a great voice — a great tenor. You have an MC working on stage with children and a full orchestra. We are also working to transform the perception of hip-hop by providing opportunities for MCs to become teachers. We created an after-school program called Wordshop. We train MCs to go into schools and work with kids to help them increase vocabulary, public-speaking skills and confidence. During Black History Month, we partnered with the City of Roswell during the Roswell Roots Festival. As we look into the future, I see us continuing to set up programming but also hit the road a little.