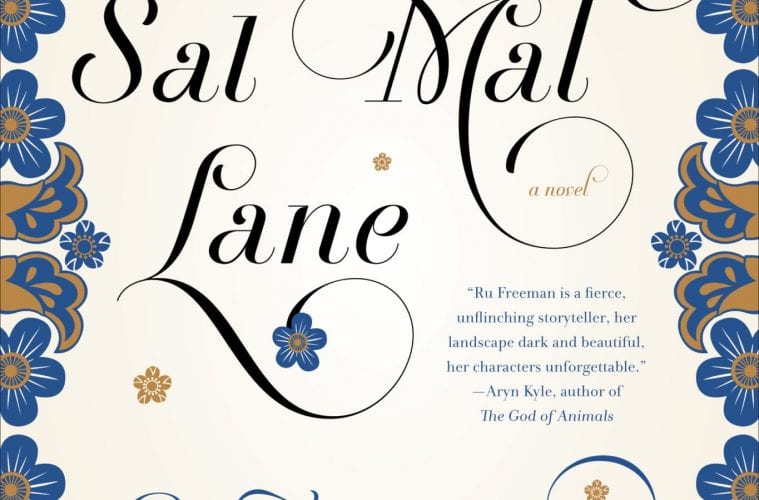 What brings together the citizens of a nation? What forces drive them apart? Can a home and a neighborhood be a safe haven?

Novelist Ru Freeman explores these questions in On Sal Mal Lane (Graywolf Press, 376 pages). In rich, gorgeous prose, she spins a tale of a neighborhood in her native Sri Lanka, where the tolerant community inhabited by Tamils, Sinhalese, Buddhists, Muslims, Christians and Hindus is disrupted and destroyed by pettiness, hatred and ultimately civil war.

In particular, Freeman who divides her time between Sri Lanka and the U.S., explores the effect this has on the children, who used to play together. Through her brilliantly rendered child protagonists, the author takes the reader into the heart of loyalties and betrayals, and the myriad ways in which children are forced to see the world as adults.

ArtsATL: What inspired your novel?

Ru Freeman: I was writing an article about the end of [Sri Lanka’s civil war] in 2009 for a national American publication, and realized that the story that the editor wanted was one that reduced the complex histories of my country to a simplistic narration about villains and saints. I had been writing a lot about political events — the invasion of Iraq, Sri Lanka, Palestine etc. — and I wanted to write the bigger and truer story. The one where people are never that simple: never entirely good nor entirely bad. I wanted to write something that would remind readers of what happens to ordinary people in the run-up to war, in its aftermath — not just this war but all the wars that we are in the middle of right now, the ones we have been a part of.

The children in this novel could be children anywhere. They could be yours or mine, and I wanted to bring them to life to create a world where readers would really come to feel that this was so: this child is mine.

ArtsATL: The civil war in Sri Lanka spanned 30 years. Why did you focus on the year leading up to the war?

Freeman: I wanted to write about the things worth saving. We have gone over many things during these years, but they have been mostly arguments over who did what to whom, when, why and where. Yet the grief at the heart of everything cannot be found in the answers to those questions. It lies at the center of what people knew in the before.

ArtsATL: You were an adolescent in Sri Lanka during this time. How much of the novel is based on memory?

Freeman: A great deal of everything I write is based on memory. And memory is both experience and imagination. It consists of stories that are told to us, things that we’ve known, but also the magical leap into things we could not have known. For example, I lived down a similar dead-end street, but there was no grove of flowers, no musical show, no piano lessons across the street. However, as children we did put on variety shows for our grandparents in far-away Kurunegala, and one of my older brothers did have the ability to recite things backward, and we all played the piano. So, like I said, equal parts of everything — experience and imagination.

ArtsATL: On Sal Mal Lane is told through the eyes of children. Why? What were the challenges of doing so? Freeman: I think the greatest obstacle to finding peace is that we each believe we have all the facts. We think, further, that these facts are written in stone; everything is as we understand it to be, when the truth of the matter is that there is no one story or fact about an event. True, 15 funerals took place, true, X number of shops were burnt, but these are not the whole of a story. Children don’t dwell with such certainties about events; their certainties are only about simple, fundamental things: doing what they love, hunger, play, friendship. I felt that their willingness to live with ambivalence, without knowing everything, as it were, would be the best way in which to create a world where there really is room for everybody’s point of view. Even the worst points of view. Because if we can accept this half-knowing within which we realize that only those few things — love, play, friendship — matter, then we are closer to peace.

ArtsATL: The elderly Mr. Niles tells one of the children that “people do not go to war … they carry war within them. Either they have war within them or they don’t.” What are the consequences of these two groups colliding?

Freeman: I once listened to some very smart writers on a panel at AWP [Association of Writers and Writing Programs] — Paul Harding, Marilynne Robinson and Ha Jin — speak about the place of evil in life, that writing about the management of evil is as much a matter of recognizing the evil within ourselves. There is a place in this book when one of the children, Rashmi, argues with her older brother that there is no such thing as canceling the evil with good, that both exist, and he replies, then do more good.

I am reminded also of the verse by the poet Edwin Markham: “He drew a circle that shut me out — / Heretic, rebel, a thing to flout. / But Love and I had the wit to win: / We drew a circle that took him in!” If we fail in diffusing [sic] war within those who carry it, it is not because we have failed at eradicating it from their hearts, but because we have failed to find it within our own to draw the circle that takes them in. And so it is in this novel. For reasons of circumstance, personality, twists of fate, that circle is not drawn around some of the characters who are then left on the outside, yearning, but unable to step forward. That is the real danger.

ArtsATL: Do you think that ultimately family influence trumps living in a multicultural, multireligious atmosphere?

Freeman: I think that family influences us no matter what. Whether we choose to move away or stay, we do almost everything we do as a reaction to the way we were raised. Living in a multicultural, multireligious atmosphere is a parallel influence. I like to think of the external (neighborhood, school, etc.) environment as the bones and our families as the blood. They both have a role to play in how we function, but we can and do function with weakness or dis-ease [sic] in either part.

ArtsATL: In your novel you have presented Sal Mal Lane as a character, and, as such, the lane as a voice in the novel. How did the lane as commentator of events come about?

Freeman: I wanted a narrator that was distant from my own voice. I knew things about these days, these years, as well as the years after and the present. I have strong opinions about all of it. I didn’t want those to color this novel. I did not want this to be my story, but the story of the people in the novel. There is so much at stake, so much political back and forth, and I’ve engaged in it all very seriously; I still do. But I did not want to do that in writing the story of that time. I wanted everybody’s story, and in order to tell that, I needed both the distance and a vessel for a voice that was not my voice. Or maybe it was my voice, but not the one I have, but one that is better, more compassionate, a truer voice.

ArtsATL: Superstition plays a big role in the novel, as does the concept of karma; in fact, the central tragedy is preordained. Does a belief in fate and destiny make people complacent?

Freeman: No more so than belief in government, free will and racial supremacy do. Superstitions are another version of the stories we tell ourselves to explain the way things are. The central tragedy of this book may have been preordained, but, as the narrator says in the book, “so long as there is human life, human life will end.” That is a Buddhist’s approach to life. More than anything, the tragedy in this book stands in for the loss of innocence in the country. There were many little things — ways of being, people, ideas, losses, wishes — that led to that personal tragedy in the same way that those same things, on both the small and larger scale, led to national tragedy.

ArtsATL: Despite globalization, so much of the world seems to be reverting to a narrow nationalism. What message might Sri Lanka have to give in this case?

Freeman: It is a funny thing that those of us Americans who advocate passionately for our neighborhood bookstores and against the giant conglomerates (the Amazons and Costcos of the world) are the very same people who embrace the idea of globalism as being unmitigated in its good. If you replace the culture of that independent bookstore with the culture of a country like Sri Lanka, and if you replace Amazon with the culture of a country like America (which is what we do when we embrace unfettered globalization), you’d see that globalization isn’t the fairy tale we imagine it to be.

Sri Lanka’s finest economic years were when the country embraced a robust nationalism that had room for every ethnic group within it. And despite all the hardship, the war ended because the people of Sri Lanka refused to listen to the dictates of the West and sought its own alliances with its oldest historical partners — China, Japan and Pakistan — something they could even conceive of doing only because they had first conceived of the idea that they did not have to swallow, wholesale, whatever message was coming from Washington. In other words, by putting their own national interest first.

On a not unrelated note, the rich diversity of the cultures of the world do lose something essential when we try to pour a single kind of syrup all over it, one that belongs to only one of those cultures. There’s a book by Ted Conover, The Routes of Man, that addresses the costs and benefits of interconnectedness. A marvelous book, which perhaps answers this question better than I have done!