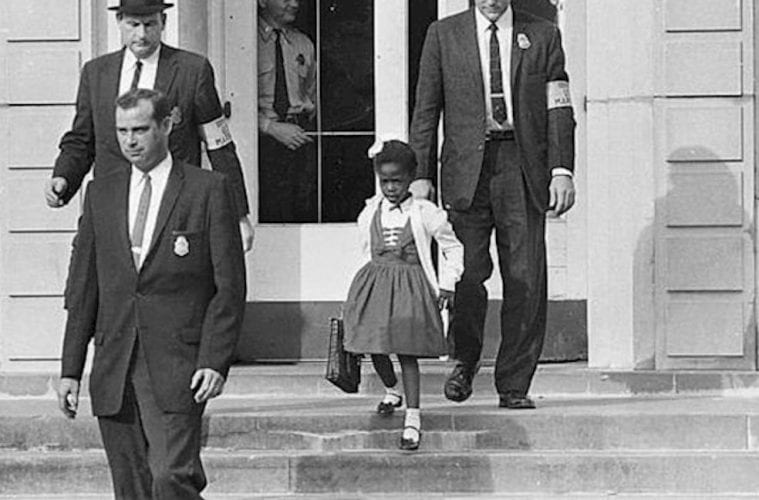 Q&A: Rachel Devlin on the girls who desegregated America’s schools

“A girl stands at the door and a generation waits behind.”

That was the final line of NAACP attorney Charles Houston’s closing argument in the 1942 case Bluford v. Canada. Lucile Bluford, who was the managing editor of the Kansas City Call newspaper, sued the University of Missouri School of Journalism after she applied and was denied admission 11 times to the graduate program. The university attempted to have her declared a legal “nuisance” and shut down the journalism school rather than admit a black woman. After the case was thwarted, Bluford continued to cover school desegregation cases across the country. She was eventually awarded an honorary degree by the University of Missouri in 1984. Rutgers University professor and historian Rachel Devlin explores Bluford’s case and many others in her new book, A Girl Stands at the Door: The Generation of Young Women Who Desegregated America’s Schools.

Devlin will speak about her book at the Margaret Mitchell House on August 30 at 7 p.m., where she will be joined by Shirley Lawrence Alexander, one of the six girls who desegregated Albany High School in 1964. Devlin will also be interviewed by author Jim Auchmutey at the Decatur Book Festival on September 2 at 2:30 p.m.

ArtsATL caught up with Devlin ahead of her two Atlanta appearances.

ArtsATL: What was your own experience of school as it relates to desegregation and diversity?

Rachel Devlin: You are the first person to ask me that. I grew up in a neighborhood outside of Dallas, Texas, called Highland Park, and schools were not desegregated. It was the ultimate southern school experience — the girls had to decorate the boys’ lockers on Fridays before football games, and there was no choice about it. There were only two Jewish students, including me, and it was anti-Semitic and hostile. It created an oppressive, anti-intellectual environment for the white students as well, because they were not encouraged to ask questions. It definitely started my interest in the Civil Rights Movement.

ArtsATL: How did you find the women for the book?

Devlin: I interviewed 30 women for the book, and I found them every way I could, but it was hard to find some of them because they had gotten married and changed their names. For the Baton Rouge women, I looked through the papers of a lawyer in New Orleans — his name was A.P. Tureaud. Once I found the names, I found the men, and they helped me to get in touch with the women. In Albany, Georgia, six girls desegregated the high school there, and that connection came from talking to a student who said her aunt desegregated the schools there. Not every woman I called would talk to me, but most did.

ArtsATL: Do you think black girls were used to desegregate schools more than black boys because they were seen as less threatening? Devlin: I kept expecting that to be a larger part of the explanation than it was. Girls ignited the same amount of violence as boys. If you look at that painting by Norman Rockwell [The Problem We All Live With], some people see that little girl as innocent today, but back then she was seen as an existential threat. Black girl sexuality was also considered dangerous. School officials assumed that they carried venereal diseases and that they were going to seduce white boys and get pregnant. No one was happier to see a girl than they were a boy. . . . The majority of black girls who desegregated volunteered to do it. They had these tools to deal with hostile white men that prepared them to go to schools from watching their mothers, who often did domestic work in white people’s homes. They were so driven by their commitment to the ideal that they volunteered to go into these war zones.

ArtsATL: Where do you think school desegregation stands today?

Devlin: School desegregation reached its height in 1988, and at that time 50 percent of black students were in majority-white schools. Psychologists have done research that shows that learning outcomes for all students were better when there’s diversity. The real setback for school desegregation happened in 2006. The Roberts court ruled in the Seattle case [Parents Involved in Community Schools v. Seattle School District No. 1, No. 05-908] that race could not be taken into account in forming student bodies, creating school districts or individual schools. The Roberts court gutted Brown v. Board, and I think we need to relitigate all the way up to the Supreme Court.

ArtsATL: Part of the argument for school desegregation in Brown v. Board was that segregation was psychologically damaging to children. Do you think that argument would hold up in court today?

Devlin: In that case, the justices wrote that segregation is damaging to children in ways that may never be undone. We have even more research now that shows the benefits of diversity for all children. They’ve also found that black students who attend majority-white schools tend to do much better academically because white schools have more resources. I know the NAACP is still filing cases in New Jersey because they allocate money to schools based on tax brackets, so you have these underfunded black schools. I think most people have given up on desegregation, and they just want black schools funded. But, I think it’s important to keep trying to advocate for that principle on a human level.