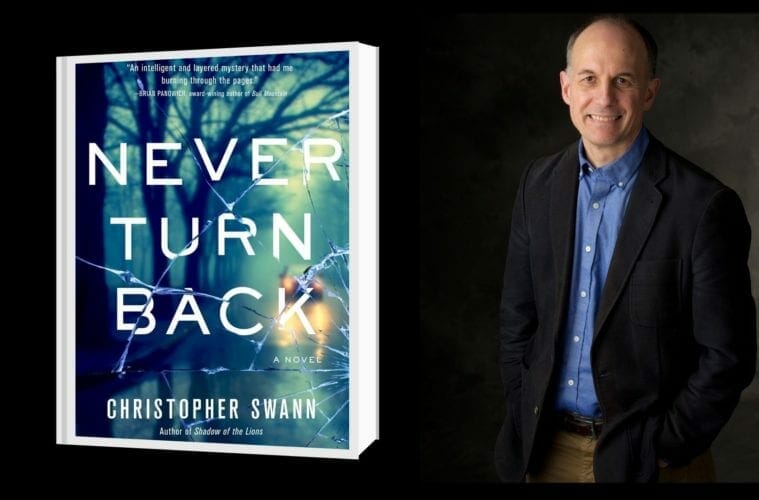 Q&A: Writer Christopher Swann goes back to school for his novel “Never Turn Back”

Atlanta writer Christopher Swann won an admiring audience with his debut novel, Shadow of the Lions, a sensitive look at friendship in a boys boarding school. He just released his second book, Never Turn Back, a literary thriller sprinkled with Latin phrases. In it, a popular teacher embarks on a whirlwind affair with a colleague about the same time that his mouthy, troubled sister shows up, still traumatized by childhood tragedies. Never Turn Back explores the bonds of siblings as they try to heal from broken pasts and right some wrongs.

Swann grew up in Virginia, and earned a doctorate in creative writing from Georgia State University. In 2018, he was a finalist for the Townsend Prize finalist and for Georgia Author of the Year. He’s the English department chair at Atlanta’s Holy Innocents’ Episcopal School. Swann recently spoke to ArtsATL about how his experiences in private schools influenced his latest novel and his writing inspirations, and gave a preview of his next two novels. 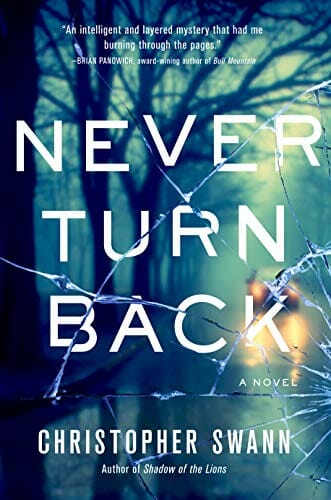 He’ll discuss Never Turn Back on Wednesday (October 14) as part of the Atlanta History Center’s virtual Author Talk series. The event is free, but registration is required.

ArtsATL: Both of your books are set in elite private schools. Can you talk about your personal background there and how that influenced you? Does the cloistered nature of those schools lend themselves to secrets?

Christopher Swann: I went to boarding school in Virginia and have taught at private schools for 25 years, so I’m familiar with those settings. Shadow of the Lions, my first novel, is set in a boarding school. In Never Turn Back, the protagonist teaches in a private school in Atlanta, but I deliberately chose not to make that the central setting.

You see real issues of class and money and privilege in private schools. While I grew up comfortably, my family was not super wealthy, so I’ve always felt both part of that world and sort of standing off to the side at the same time. And yes, private schools by their very nature are private and can keep secrets, although none of the secrets in either of my books is something I’ve experienced in real life.

ArtsATL: One of the strengths of this book is character development. Even peripheral figures — especially the shady ones — are fully realized. What’s more important to your fiction, character or plot? How do they serve each other?

Swann: Charles Dickens and Stephen King, among others, taught me to make every character as fully realized as possible. We read stories because we connect with characters, or at least find them compelling or fascinating. That said, characters have to do something. There’s a criticism of folks trained in the creative writing academy: They can write very beautifully about not very much. Like all generalizations, that’s a gross overstatement, but there is a little bit of truth to it. In many creative writing classrooms, form and style and characterization are prioritized over plot. But I like stories that move, that compel us to turn the page to see what the characters do next. The best stories are all character-driven, I think. A plot without interesting characters is like pizza without toppings.

ArtsATL: Did you do research into mental illness for Never Turn Back? Without giving away any spoilers, can you discuss the role psychiatric disorders play here? 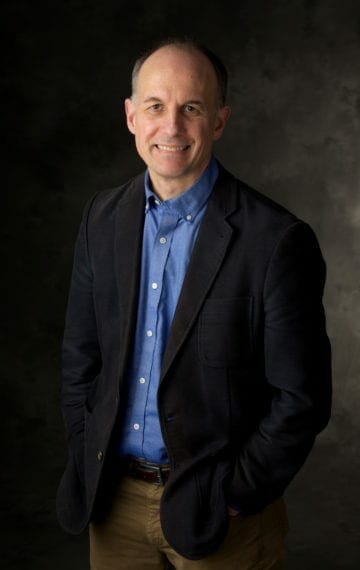 Swann: I did some research on mental-health centers and sociopathy and psychopathy. Several years ago I heard Jon Ronson speak about his book The Psychopath Test, which I enjoyed and reread while writing Never Turn Back. Psychopaths are fascinating and frightening, and as a writer I’m interested in that line between a stable, mentally healthy person and a psychopath. What’s the tipping point? Where’s the line between good, bad and insane? What leads a good or potentially good person to do bad things?

I love the BBC show Sherlock, which stars Benedict Cumberbatch as a 21st-century Sherlock Holmes. In the first episode Holmes argues that he’s not a psychopath but a high-functioning sociopath. But he’s not really either one — he’s a complicated character who does socially inappropriate things, even outrageous things. But he also has a conscience and emotions, which he controls fiercely and at times struggles to understand. That’s a character I find fascinating.

ArtsATL: There are subtle shades of Kafka in both of your books — nice guys who become fall guys. What other writers influence you?

Swann: Pat Conroy, for one. I love Martin Cruz Smith, especially his Arkady Renko series. When I think of “literary thrillers,” I think of him. Stephen King. Donna Tartt. Gillian Flynn. Raymond Chandler. And as left field as this might sound, Geoffrey Chaucer. The man was genre-blending back in the 14th century.

ArtsATL: Cyber-bullying offers one of the many twists in this plot. Is that something you’ve  dealt with as a teacher or just something you work to anticipate and guard against?

Swann: I’ve never been bullied online, although I know students who have been. Cellphones make it so easy for anyone to fire off a mean tweet or an ugly post, and they offer direct access to people. [Writer] Emily Carpenter and I were once talking about how as writers we hate cellphones because they’ve canceled all sorts of problems that we like to throw at characters. Can’t get inside the house? Just call the police from your cellphone. Lost? Just use a map app. Don’t know what language is on a piece of paper you found in someone’s desk drawer? Google it. But cellphones are ubiquitous, so I’ve tried to incorporate them into my novels in meaningful ways. In Never Turn Back, phones are both a treasure trove of information and a tool by which a character can terrorize others.

ArtsATL: As likable as your protagonist, Ethan Faulkner, is, it’s his tough-cookie sister Susannah who tends to take the spotlight. How did you develop her  character?

Swann: Susannah appeared on the page as an angry child taunting her older brother. More than any other character I’ve written, she took on a life of her own. I had the most fun writing her and really enjoyed every one of her scenes. I really wanted to create a strong female character who may or may not be crazy.

ArtsATL: You’re working on a third book. Can you please talk about it?

Swann: My third book is a standalone, untitled at this point. I’ve been calling it the mountain novel because it’s mostly set in western North Carolina. I just turned in a draft to my editor. The fourth book, which I’ve already started, will be a sequel to Never Turn Back, and it’s going to be from Susannah Faulkner’s point of view. I’m really going to enjoy writing that one.