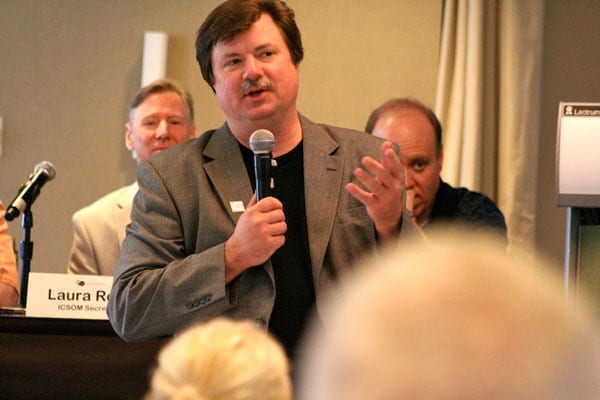 Contrabassist Bruce Ridge has been a member of the North Carolina Symphony in Raleigh since 1987. He is also a leader in the symphonic music industry as chairman of the International Conference of Symphony and Opera Musicians, which represents more than 4,000 musicians in 51 major symphony orchestras throughout the United States.

ArtsATL: Give us an idea of why you are here as chairperson of the International Conference of Symphony and Opera Musicians.

ArtsATL: This past year, we heard so much about struggles in certain orchestras as they entered negotiations of labor contracts with musicians. In Atlanta, this resulted in a lockout of the musicians and a reduced season.

Ridge: What happened in Atlanta with the lockout fits into a pervasive, negative view of the future of orchestral music in America. I’m here to advocate a different, positive message and to assist the musicians in articulating their own message of the value of this orchestra to this community. I’m not sure the message is getting out that Atlanta has one of the world’s greatest orchestras in residence, what that really means to the community or why that is important.

A lot of times we talk about the need to “save” orchestras, but sometimes we don’t really talk about “why” — and there are very tangible reasons why. There is a lot of mythology. The story to be told is not that orchestras have suffered in the economic depression, but how well they’ve done.

ArtsATL: When you say “orchestra,” for many people that means the musicians who make the music and the people behind the scenes who make the logistics and support happen. For others, that means the institutional organization and its “brand.” What do we really have these days: an orchestra of musicians with an institutional structure supporting it, or a presenting organization with an orchestral component?

Ridge: A good question, and the second way you describe it concerns me. That’s not to suggest that these organizations can’t play a “presenter” role — “specials,” as we call them now in the business. But the foundation of these organizations is the orchestra, the musicians onstage. When we attempt to build a so-called “new business model” that doesn’t focus on preserving the artistic integrity of the orchestra onstage, then the institution is building its future on quicksand.

This “new model” has, actually, always been around. Sometimes it’s been called the “new paradigm.” I’ve taken to calling it the “new apocalypticism,” because it’s a negative ideology. For some reason, we work in a field that seems to promote and undermine itself at the same time.

I have an article here from United Press International called “25 Orchestras Doomed to Die,” and it lists the orchestras that will die. This would be very frightening, except it was written in 1970.

ArtsATL: Interestingly, it names the Atlanta Symphony Orchestra as one of the first expected to die. Obviously, news of that death was greatly exaggerated.

Ridge: There is no doubt that the recent economic downturn has affected everybody. There’s no escaping that. But the reality is that the messages we put out from the arts are things like “we have a graying audience” or “attendance is down.” It simply isn’t true. The fact is that, in many places, attendance is rising.

ArtsATL: And when a negative message is out about sustainability and the like, such as the “graying of the audience” …

Ridge: This is one of my favorites, the myth of the “graying audience.” First of all, I don’t think it’s exactly true. Even the administration here has said the average age of attendance has gone down from 57 to 52. To determine that the audience is “aging,” people go back to studies of attendance in the 1940s. Well, the average life expectancy in 1940 was 62. Today it’s 79. If you ignore that, you can make an argument that the audience is aging for anything, right? The fact that we now have an audience base with an additional 15 years of life span is not a problem.

ArtsATL: Stanford University economist Robert J. Flanagan wrote a book, The Perilous Life of Symphony Orchestras, that was published last year and essentially blames the cost of labor for recent financial woes of orchestras. He calls it a “cost disease” that leads to unsustainability.

Ridge: The flaw in Professor Flanagan’s work is that I don’t feel he really understands the subject, and he completely ignores the current data that demonstrates increased attendance.

You know Miller beer, right? Miller beer is not “the champagne of beers,” but they say they are. They put it on every bottle, and for a while in college, they had me pretty well convinced. What they don’t do, as an industry, is commission a million-dollar study from a Stanford economist to say that they’re not really the champagne of beers, that they’re going to have to start using cheaper ingredients and that they’re going to have to change their business model to accommodate it. They just say it, and they promote it. No business ever solved a financial problem by offering an inferior product to consumers.

The simple fact is that people like to invest in an organization that inspires them and is serving the community. They don’t invest in organizations that question their own sustainability.

Too often we get a negative viewpoint coming from managements. I want to emphasize that we can’t speak in blanket terms, as there are managers who are doing extraordinary things. One of my managerial heroes is Michael Kaiser, president of the John F. Kennedy Center for the Performing Arts. He published The Art of the Turnaround in 2008, a brilliant book that everybody in our field ought to read. Very inspirational.

This is a man who says very boldly and very actively, “Non-profit organizations do not exist to balance their budgets. They exist to serve the community.” Through his viewpoint, his advocacy, his methods and this notion that he puts forth, this is a man who has never run a deficit. There is a cause-and-effect relationship.

ArtsATL: So, in a nutshell, what did you come away with from your week in Atlanta and Birmingham?

Ridge: It was a week that was incredibly inspiring. The Alabama Symphony Orchestra is an incredible asset, a jewel in the Birmingham community. It had been many years since I had heard the Atlanta Symphony Orchestra live. They sound phenomenal. The concert I heard was very interesting. I was especially impressed with Michael Kurth’s piece, which was outstanding. His music is definitely going to be heard. To have a composer of that talent in the orchestra is wonderful.

I got a sense of great unity and dedication on the part of the musicians of the Atlanta Symphony. They’ve been through a lot, but when I met with them — individually, in small groups and the entire orchestra — I was so taken with their dedication, their appreciation of their core mission and serving the community. They love their orchestra.

I had conversations with management of both orchestras. In Alabama, they were very courteous and I met with the entire staff. We talked about advocacy and what’s really happening for the arts and music. In Atlanta, I was also treated with tremendous courtesy and welcomed by everyone, including Maestro [ASO Music Director Robert] Spano, who was very gracious. I really enjoyed my conversation with him.

I also met with Dr. [Stanley] Romanstein [president and chief executive officer of the ASO]. It was a positive conversation. We talked about the importance of articulating the positive message to serve the city of Atlanta, to make sure that everyone really understands that the Atlanta Symphony is one of the world’s greatest orchestras and how that core mission must be protected as they seek to do other things as well.

We talked about the importance of building positive relationships, some steps that could be taking place, as obviously relations were strained during the lockout. We talked about the importance of restoring what has been lost for the musicians. I stressed that to continue being one of the greatest orchestras of the world and serve this city at the highest level, the [52-week] contract must be restored. I said I am looking forward to coming back to Atlanta to hear the orchestra again and help celebrate many successes.