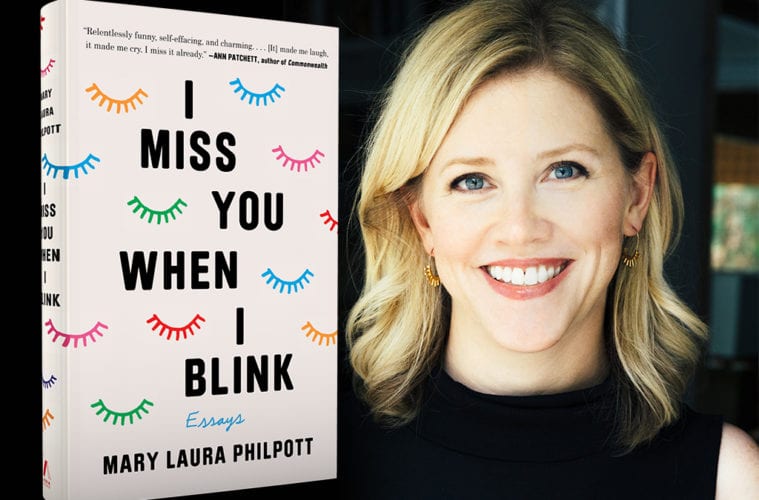 Mary Laura Philpott's I Miss You When I Blink has been named a Most Anticipated Book of 2019 by BuzzFeed, The Millions, Bustle, HelloGiggles and Lit Hub, and a Best New Book of Spring 2019 by the Chicago Review of Books. (Photo courtesy of Simon and Schuster)

Q&A: Mary Laura Philpott on her debut memoir-in-essays, I Miss You When I Blink

Mary Laura Philpott is all of us.

The author of the acclaimed debut memoir-in-essays I Miss You When I Blink loses her car in parking garages, trips when she walks and is a type-A perfectionist (sometimes to her own detriment). More than that, though, she, too, has contended with big questions at 3 a.m. — ones like, “Is the life I’ve ended up living the one I should be living, or have I made a wrong turn somewhere?”

Her essays explore these questions, along with other weighty subjects such as depression, loneliness, work and motherhood with a humor, tenderness and poignancy that makes readers feel not only like they know her, but like she knows them — like she’s right there with you after everyone else from the party’s gone home, glass of wine in hand, ready to hash it out about your latest mid-life crisis.

In advance of her book event at Gregg Irby Gallery on Saturday, April 13, ARTS ATL chatted with Philpott about writing memoir, Sylvia Plath and finding ourselves in the books we read.

ARTS ATL: I’m always interested in how a book gets born. Can you talk a bit about how I Miss You When I Blink came to be?

Mary Laura Philpott: I had the title long before I had the book. There was a period of time where I kept thinking, “I should have a book called I Miss You When I Blink,” but what would it be? Would it be a novel? No, I don’t write fiction.” And then at the same time, I was writing essays and publishing those periodically in various places. The idea came to me to maybe take a few of those and expand them, and then it was like, “Oh, and I already have a title waiting for me right here.”

ARTS ATL: The initial response to the book has been overwhelmingly positive. Readers love it because they feel like they can see themselves in the stories you’re telling. Has that reception surprised you at all?

Philpott: It wasn’t a motivation to write it in the beginning. I didn’t sit down and go, “I’m going to write an essay collection that is going to make people feel seen.” I’m one of those people — I don’t know what I’m writing until I’ve written it.

It was well into that process of building that stack of essays when I started noticing this repeated conversation happening around me — not just in the bookstore where I worked but out in the world among women saying something to the effect of, “I want to start over,” “I need a fresh start,” or “what the hell am I doing with my life?”

And it was the combination of those things — having the book about three-quarters of the way done and hearing those conversations again and again that made me go, “Is that the book I’m writing? Maybe I’m writing the book about how often we feel that I-think-I-need-to-start-over feeling.”

ARTS ATL: In the essay “The Window,” you touch on this idea about the selves we don’t get to be as a result of choosing one version of our life over the other. Can you talk a bit about that?

Philpott: Sylvia Plath has this thing she talks about — I think it’s in The Bell Jar. It’s this image of a fig tree, and how when you look at a fig tree, it has all these branches and all these figs on every branch. But if your life is that fig tree, you don’t get all the branches. You have to pick. And as you make these choices in your life, and you choose one thing over another, the other branches disappear. This luscious fig tree of your life is disappearing branch by branch as you don’t choose things.

[Plath] writes about it so poignantly, with such melancholy and mourning over the lives she doesn’t choose to lead, and that has always stuck with me.

ARTS ATL: You currently live in Nashville, but many of the essays in I Miss You When I Blink take place during the years you lived and worked in Atlanta. Is there anything you miss about the city?

Philpott: The thing I miss most about Atlanta, hands down, is my friends. That was the hardest thing about leaving, knowing, “This isn’t the place for me anymore, but I love these people. These are still my people.”

ARTS ATL: You work at a really great independent book store in Nashville, Parnassus Books, which was founded by novelist Ann Patchett. Did you have a favorite Atlanta bookstore when you lived here?

Philpott: Over on Pharr Road, there used to be — it was called Oxford Books. It was in a round, honeycomb-shaped building. It was so cool. In the heyday of bookstores, it was the coolest store. I met Pat Conroy at that bookstore. It’s where I used to go to readings. Then it closed, and we didn’t really have one in Buckhead and Midtown, near where I lived. So I’m really glad that Frank [Reiss] at A Cappella is being the bookseller at this event. I’ve been trying really hard to do an indie tour.

ARTS ATL: Last question — what is your big hope for this book as it continues to gain a readership?

Philpott: My greatest hope is that friends pass it to each other, that word-of-mouth gets this book into the hands of people who need it, who need to feel seen.