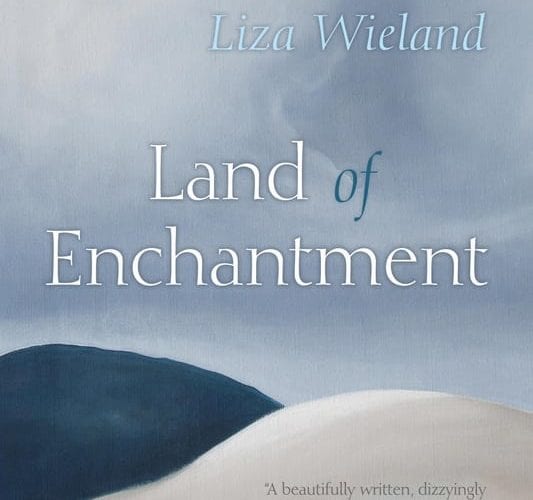 In Land of Enchantment, Liza Wieland explores the ways art creates connections. Told in interconnecting storylines about three women artists, the novel braids a delicate tale of loneliness, love and the transformative power of art.

Brigid Schumann is 17 years old and pregnant. She is also a talented painter. Her decision to give her daughter to a loving couple frees her to pursue her art, but it also opens a chasm of pain. After apprenticing herself to Georgia O’Keeffe, she learns to focus her painter’s eye, and her searing portraits of Native American life catapult her to fame.

Years later, Brigid’s daughter Sasha is traumatized by the cataclysmic events of 9/11. An aspiring filmmaker, Sasha begins a documentary about the event, focusing on the bodies falling from the World Trade Center towers.

Meanwhile, Nancy, an Atlanta girl who experienced the 1996 Olympic bombing, is experimenting with drama, writing scenes between historical artists across time (Georgia O’Keeffe and Johannes Vermeer), through which she deals with her own emotional issues.

In examining each woman and her development as an artist, Wieland makes clear that although art may arise from trauma and often interprets trauma, it can also create a revelatory land of enchantment where one can process disturbing subjects in positive ways.

Wieland, who grew up in Atlanta and graduated from The Lovett School in 1978, forged an interest in art in childhood. Her mother was a painter. Wieland’s art of choice, however, has always been literary.

ArtsATL: How did you come up with the idea for Land of Enchantment?

Liza Wieland: I’ve always been interested in writing about artists and actually most of my books are about artists. I came across a comment by someone who said that reading a novel about painters is like watching paint dry. I thought, well, there’s a challenge. Land of Enchantment started with Brigid. For a while she was going to be the whole novel, but then the other characters started talking to me, and their stories became more vivid.

ArtsATL: Your novel ruminates on the healing qualities of art and the ways it can bind people together. The characters are painters, playwrights and filmmakers, but not fiction writers. Why?

Wieland: A poet is the topic of the next novel. I’m holding off on the novel about the art that’s closest to home. My mother was a painter, and I’ve loved paintings and looking at paintings and wandering through museums my whole life. Then I found myself fascinated by the ways visual art is adapted by filmmakers. Image sometimes has sound and sometimes not, but the images are alive in clear ways. Drama seemed to be a similar enterprise to painting and filmmaking because it, too, is visual. The purpose of drama is to be seen, but it errs on the side of language more than painting or filmmaking. These three art forms seemed related to me.

ArtsATL: Why did you decide to include O’Keeffe and Vermeer?

Wieland: O’Keeffe has been a fascination of mine for a long time. Her paintings are so interesting to me because they are so clear. It is obvious that you are looking at a flower blossom or inside a deer’s skull, but when you spend more time with them you realize that they are much more complicated. These images draw your psyche into them as well as your eyes. For the novel, the idea — and I don’t think this really happened — but the idea of a young woman apprenticing herself to O’Keeffe seemed like an opportunity to make a fiction.

As for Vermeer, I love him for some of the same reasons. His paintings are equally complex. Yes, there’s a woman pouring milk, but there’s much more to the story. My character Nancy is fascinated with putting two people together in her drama who could never speak in real life. I thought it would be an obvious subject for her to create conversation between Vermeer and O’Keeffe. ArtsATL: Why did you choose to include the bombing of the World Trade Center and the 1996 Olympic bombing?

Wieland: The connection between these sorts of horrific events where people are killed, even though this sounds dire and dark, is fascinating to me. I was in Atlanta during the ’96 bombing, though I wasn’t at the park. I wasn’t in New York during 9/11, and I’m not fascinated with the bombing itself. For me, it was the bodies falling from the tower, and I think all Americans are drawn to and paralyzed by this. These final gestures have fascinated me for years.

ArtsATL: Your novel argues strongly for the transformative qualities of art. Even though certain art may upset us, this discomfort is necessary because it makes us see and understand our world in new ways. There is a cultural conversation in this country about the role of literature in classrooms and whether students should be required to engage with texts that might upset them. What are your thoughts about this, and were you thinking about these issues as you wrote?

Wieland: I was thinking about those issues because I always am. Not so much in classrooms but in life. Early on, when I was younger, I had a conversation with my mother, and I wondered about the purpose of art and if it should upset you. Her opinion was that art should always give you pleasure and not push your buttons too hard. I think the opposite is true. Good art makes you sit up and take your medicine. It makes you rethink your values, prejudices, ideas.

In the classroom, I believe this, too. I think that if certain texts don’t get explored, students will go on their happy path and not get their worlds moved and that’s the point of education. It shouldn’t necessarily change your mind, but it should excite your mind, turn it over, and urge you to explore things that you wouldn’t normally address.

ArtsATL: You mention in your acknowledgements that you are appreciative of your time writing with your students. How has your teaching fueled your writing?

Wieland: Teaching and writing are tied up together for me. It isn’t so much that my students’ work inspires me, but that I’ve gotten into a habit of writing quietly in the classroom with them. As writers, we rarely feel that grace, that humming, that feeling that everyone is engaged in the same experience because writers work in solitude. Feeling my students engaged in discovery as they write, while I am also writing, is inspiring.