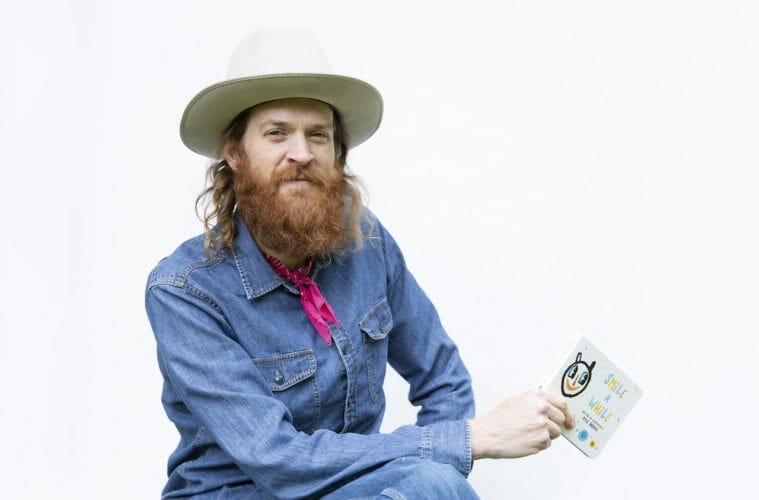 Kyle Brooks, the man behind Black Cat Tips, releases his first book, Smile a While, later this summer. (Photos by Amanda Greene Photography)

Q&A: Kyle Brooks shines “a little bit of light” on his new book, “Smile a While”

Kyle Brooks is a storyteller — a word with a mosaic definition that stitches him together as an artist, a poet, a writer, an ever-changing combination of all of the above. He’s the man behind the art of Black Cat Tips, a magician of mismatched phrases and funny tellings-of-things and a lover of Georgia highways lined with handwritten signs promising peaches ahead.

Brooks’ art has a kaleidoscopic fingerprint that can be seen throughout the city. His murals have decorated the Atlanta Beltline, his hand-painted bottle is on display in the World of Coke Museum’s Pop Culture Gallery, and he recently designed a game-day poster for the Atlanta Braves.

Known primarily for his paintings, Brooks recently decided to explore a new avenue for his storytelling by writing and illustrating his first book, Smile a While.

Brooks described Smile a While as less a traditional book and more of an art collection paired with “happy little stories.”

“In a way, it’s kinda some self-help I wrote to myself,” he says. “I deal with a lot of ups and downs in my brain, and I am happy and funny half the time. But the other times I get worked up and wanna stomp my foot, and a lot of the things in this book are reminders to myself of simple ways I can make my brain happy again. One of the pages says, ‘Smiling faces, try it for a day. Smile for a while and watch your blues go away.’ Things like that.”

Brooks spoke with ARTS ATL in advance of Smile a While’s summer launch about his inspirations, aspirations and a few of the colorful things he can’t seem to get unstuck from his head.

Says Brooks, “For the interview, just say, ‘He’s a pretty nice guy, but he talks a lot.’” ARTS ATL: On your website, you call yourself a “teller of tales.” What does being a storyteller mean to you?

Kyle Brooks: That’s a complex one to start off. When I grew up, there was a guy that came to my high school, an old guy with a weird, white, long mustache. He said he was a storyteller. I didn’t really sit in to be a storyteller — I liked the idea of a poet or a writer. But it’s something about the way I talk. I guess everybody tells how things happen in different ways. When mine come out, people seem to laugh at it or react in a good way. I guess I’ve got a funny way of retelling things, which I think is a neat thing.

I use funny words, swap out funny words for other ones, come up with mismatched phrases. That just happens. I don’t try to do it, but it just comes out of me. I guess it’s a memorable way to retell what happened.

See, I took your question and tied it all in a knot.

ARTS ATL: And how do you think you developed that really special, unique way of telling stories?

Brooks: I used to just write a lot of words that would come to me while I was painting — write them in the paintings. I’d see something, I’d hear something, and then it kinda went through my head and it would come out, and I’d just write it down.

It’s interesting — it’s like you lay a seed out there, and it grows different in different people’s mind gardens, you know? Just letting things flow through your head sometimes can be a magical thing.

I just like incorporating words, a lot of the Southern kind of country, folkish, not-so-educated ones, like sign painters and things you see along the road — a sign on an old church where a couple words fell off, or when you go out on a trip and they have 18 signs that talk about peaches up ahead. All that weird, kinda unplanned roadside communication always appealed to me — those hand-lettered, not-meant-to-be-funny-but-they’re-funny-to-me things. That weird way of communicating.

ARTS ATL: Let’s talk a little more about Smile a While. What compelled you to want to write it?

Brooks: I had been asked many times to make a children’s book for different people. People would approach me with a story or ask me when I was gonna make one, or they had some idea. But it never seemed right, and most of the people never had a plan.

Part of the holdup for me was because I didn’t want to draw the same character over and over, going to the store, riding a bike, or whatever . . . to redraw the same thing over and over. But Laura Thompson came up to me after an event I did at Serenbe and gave me a little Andy Warhol art book and said, “You should do something like this one day.” With that Warhol book, I saw that I could really just make a little art book, and it didn’t have to follow such a direct line of thought.

One of the main things I wanted to do was to have a collection of my art in a format that a lot of people could buy. They don’t have to buy a big painting. For less than 20 bucks, they can get 16 or so paintings — something they could keep or give away.

I went through a few ideas, but I decided to go with this kinda lighthearted book about smiling. It was just this poem that came to me while I was driving to Atlanta for some sort of meeting or something, and I decided I could use it, so I just matched some of the pages up to my paintings. One’s about music, so I made the guy playing the trumpet, you know? It just became this happy little collection of paintings and a little poem. Seemed like a good place to start. I’m very proud of it.

Smile a While is funny to me because I thought I came up with it for this book, but I realized one time when I was asked to do a painting for the Coca-Cola hundred-year bottle book, I submitted three of them, and they picked one. But one they didn’t pick said “smile a while” on it. It was a funny lookin’ kinda old man with funny hair and two teeth, and I didn’t remember it, but I’d written it first on that. I guess the phrase was stuck in my head. ARTS ATL: Smile a While is your first book. Do you think it’ll be your last? If you did consider another book, what might it be about?

Brooks: A little over a year ago, my baby son was born, and right after he was born, I got the flu, and they sequestered me away upstairs. I stayed there for like a week and a half, and during that time, I was looking out the window at the tree and the sky, and I wrote this six-stage little poem about a ribbon of inspiration — a ribbon in the sky.

I just saw it weaving through the sky and the trees and thought about how this ribbon of color flows through all different kinda people, and each person has their own color and their own ribbon spirit in the sky with their own special message that they need to listen to — a voice that speaks to you and gives you good ideas.

That’s one. I do a lot of writing, so I have a bunch of, I don’t know, happy little stories that I come up with, little poems. A lot of them I’ll write when I drive around and it’s quiet in the car.

ARTS ATL: On the cover of your book is the same illustration that serves as the face of Black Cat Tips. You’ve said that it isn’t a cat, it’s a bear. What’s the story behind this character?

Brooks: The bear came about when I did the first mural for the Atlanta Beltline in 2011. Some people don’t know what to make of it other than it’s a smiley face with ears. People think it’s everything from a cat to a pig to a rabbit. People drive by my house and think there’s paintings of rabbits around.

It goes with a lot of stuff I do that makes people smile but is also confusing.

He is a bear. In the end, I don’t know if it really matters so much if people like looking at it, but I don’t know. Sometimes these things find you, and it’s hard to get away from them. So I used it, handed out stickers with my info on the back, and it became this little logo.

ARTS ATL: How will you be celebrating the launch of Smile a While? Where can folks find it?

Brooks: The specifics aren’t decided yet, but we’re gonna do a couple meetings and book signings around town. We’re talking with a couple different venues. Selling it through the website — that’s the main focus. At some point, later in the summer, I’m planning on having a sort of show, like a celebration, where we’ll have me and the book and some art.

ARTS ATL: What’s your hope for this book? What do you hope someone comes away with after they’ve finished reading it?

Brooks: The book is just talking about being happy and smiling, or just a little quick, “Oh yeah, things aren’t bad. Look a’ there. I can laugh at myself.”

I smile, and all of a sudden I can see a little better.

The last page is a nighttime scene with a moon and some candles, and it says, “Smiling faces, they’ll always do you right. In the darkest of places, you’ll see a little light.”

Everybody needs just a little bit of light.

Copies of Smile a While are available to reserve at www.smileawhilebook.com.