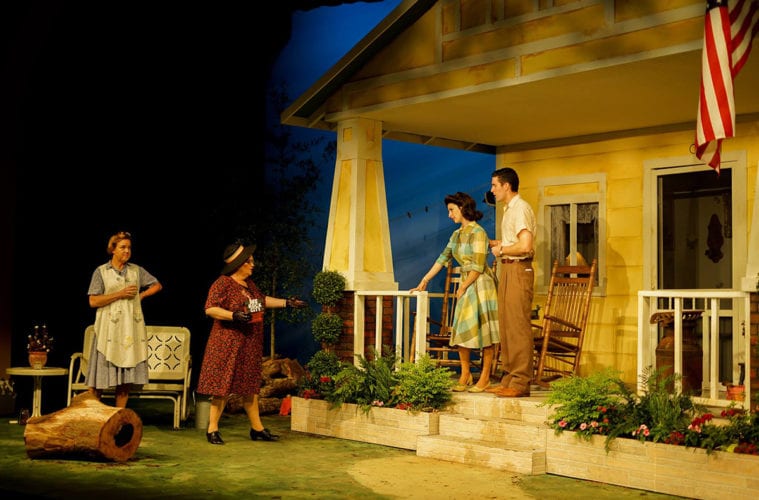 It’s true that when most people think of theater in Atlanta, their minds go inside the perimeter. Sure, Aurora Theatre and Georgia Ensemble Theatre have been operating successfully outside the perimeter (OTP) for years, but the lion’s share of curtain calls is taking place within city limits. However, Buford’s residents hope to change that — and so do Julie Skrzypek and Justin Walker of the newly founded Theatre Buford.

After launching with a production of Damn Yankees, Theatre Buford kicked off its inaugural season, which includes Arlene Hutton’s See Rock City, A Christmas Carol and Tennessee Williams’ A Streetcar Named Desire. They will end the season with the musical Footloose, performing April 12–28.

ARTS ATL spoke with Walker, who’s originally from South Carolina and started his career as an actor, performing in regional theater companies across the country, including Atlanta’s Alliance, Aurora, Serenbe and Shakespeare Tavern (where he met Skrzypek). Here he talks about starting a theater company in a city where one was badly wanted but absent.

ARTS ATL: What inspired the creation of Theatre Buford? Why Buford?

Walker: Julie and I met while we were doing A Midsummer Night’s Dream at Shakespeare Tavern, and we ended up forming a fast friendship. Then, we heard that the city of Buford was looking to have a professional theater company that they can call their own. So we got to talking about it and what kind of things we’d want out of a company within that city. Our two big things that we’re excited about [are] bringing professional, live theater to a community that wants it and providing more jobs for Atlanta artists.

Our desire is to make the best art possible, with the best artists possible in the best possible work environment that we can create. The city was right there with us, ready to invest the time and resources, ready to having a high-quality professional theater in their community that they can say, “This is our resident theater company; we’re here to support the arts.” ARTS ATL: What sort of plays is Theatre Buford most interested in doing? What do you look for when selecting shows for a season?

Walker: We’re looking for stories, whether it’s the book of the musical or the script for the play, that just have stories with heart, that challenge the human experience, and things we feel like our community can relate to. If you take a look at this season, we really have a lot that has to do with someone being “the other.” In a play like See Rock City, you have a young man who’s the “other” because in the time of war, he’s been deemed “not fit” to fight, and he also doesn’t have the money to be able to get an education, so in a world where everything’s changing around him and people have found a place, he’s just kind of on his own island, and trying to find that place in the world.

ARTS ATL: What has the public response been so far?

Walker: It’s been great. We’ve had a lot of positive audience response, and then it’s showing in ticket sales for us, which is great. We walked into a local restaurant the Sunday after Streetcar matinee, and we had a group of people at a table, as we were walking by, shouting, “We just saw the show, we loved it, thank you so much, it’s great, we can’t wait to come back and see something else!” So, that’s been really exciting.

Walker: One of the big things that we’re doing is [having] an ensemble on our stage that looks like the city that we live in, meaning the Greater Atlanta area. For me, that means taking roles that are traditionally thought to be only open to white actors, opening that up and seeing how that brings new life to a story. So, in Footloose, we have an African American actor playing Ren, and then filling out the roles of his mother, aunt and uncle are African Americans as well. What that means is if we have a white character coming from Chicago into [a small Midwestern town], what kind of language of dance does that character have versus an African American person coming from Chicago in the ’80s? What kind of movement story would that person be telling because we’d be owning different styles of dance and music during that time period? It also opens up some other questions about that “other” as well, because now we have someone who’s not just an outsider from a different city but also someone who isn’t of the dominant race of the town that they’re coming into. And then what’s that going to mean in a relationship that’s also not between two white people onstage in terms of the love interest?

ARTS ATL: Anything else that you would like us to know?

Walker: Just that we’re really, really excited for the support that we’ve been receiving from people. We know it’s a drive, but if people want to make the commute up from Atlanta, we’d love to have people in for an awesome experience.