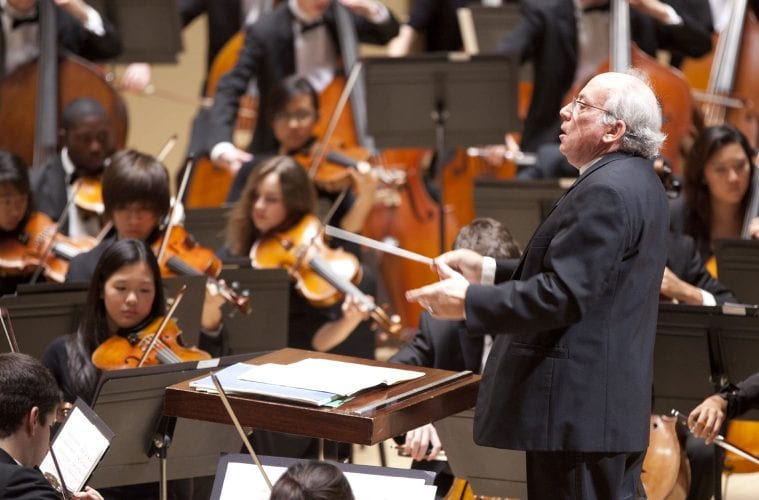 Q&A: Jere Flint reflects on his 47 years with the ASO as he leads youth orchestra in his grand finale Jere Flint has been a cellist with the Atlanta Symphony Orchestra since 1967, has served as music director of the Atlanta Symphony Youth Orchestra since 1979 and has also conducted the Atlanta Symphony Orchestra in hundreds of diverse concerts over the years, from Tiny Tots to Summer Pops, as the orchestra’s staff conductor. As such, he has led concerts within the ASO musical family for more consecutive years than any other conductor in the organization’s history. Flint will retire from the ASO at the end of this season. ArtsATL spoke with Flint in advance of his final concert this Sunday as the music director of ASYO.

ArtsATL: Tell us how you came to join the Atlanta Symphony Orchestra.

Jere Flint: I’ve been here 47 years. I came in 1967 from graduate school at the University of Washington in Seattle. There was a notice on the job board from Atlanta that said Robert Shaw was coming to the Atlanta Arts Alliance and they were looking for student artists to help build the orchestra.

So I auditioned. I thought I’d stay for a couple years and have been here ever since. It has been a great experience because I was in literally on the ground floor. A part-time professional orchestra existed, but they wanted Robert Shaw to build a world-class professional orchestra and inspire the city to get behind it. A bunch of us younger players came in and they went to what they called a full-time orchestra the following year, meaning daytime rehearsals and a modest but full-time kind of pay scale.

ArtsATL: You were hired by ASO specifically as a cellist, not a conductor. Flint: Yes. I had studied conducting at the University of Washington [where] my graduate fellowship was in opera direction and production, which means you do everything except sing. You move scenery, do the lights, drive the truck. We drove around the state putting on little operas for school kids.

Anyway, I came to Atlanta as a cellist. I talked to Robert Shaw about doing a little bit of conducting, but he had already hired two assistant conductors, so there was not a space for me to do anything until one of them [Michael Zearott] left. Then there was an opening to conduct concerts for very, very young children. That was my first experience conducting a professional orchestra. That was in 1975. In 1979 they said, “Can you direct the youth orchestra?” I said, “I have no idea, but I’ll try it.”

ArtsATL: Briefly give us some insight into Atlanta Symphony Youth Orchestra.

Flint: We’re one of the few youth orchestras sponsored by a major symphony orchestra. We rehearse on the main stage of Symphony Hall and have use of their equipment and the phenomenal coaches. I’m convinced that it’s the coaching and mentoring, the teacher-student relationships, that make it what it is.

We are a pure youth orchestra in that the musicians are ages 13 to 18. Part of the agreement has always been that they maintain membership in their own school orchestras. The purpose is to go back and be a peer leader in your own school system.

ArtsATL: So it plants the seeds of arts leadership early, producing both music professionals and future arts patrons.

Flint: Absolutely. That’s the process of sustaining the arts. ArtsATL: In retrospect, how do you perceive the changes that have taken place between those days and now?

Flint: My perception is I lived through the “golden age” of symphony orchestras and didn’t realize it. The pay scale was getting better. It turned from a 36-week into a 52-week season. We did massive summer concerts at Chastain Park, selling out night after night. The Atlanta Symphony Orchestra was on the forefront of everybody’s mind.

Then in the last few years, hardships have hit the arts, with the recession [and] collapse of the economy. Now audiences have changed, they say, although even when I came 47 years ago the audience was gray. The audience will always be gray, because that’s when classical music and the arts begin to mean something to people, in their older age.

ArtsATL: What’s in the future for Jere Flint?

Flint: I need to sit back and ponder a little bit and see where I want to go. I don’t know what musically might come along. I’m open to it but I’m open to other experiences, too. I might go back to school for a while and try to learn something else. I’ve always had an interest in mechanical things, electrical things. I’d like to build a few things. It sounds kind of funny, but in music, once you’ve played it, you’re done. The experience is there and it’s gone. I’d like to build something and say, “I built that. It exists.”