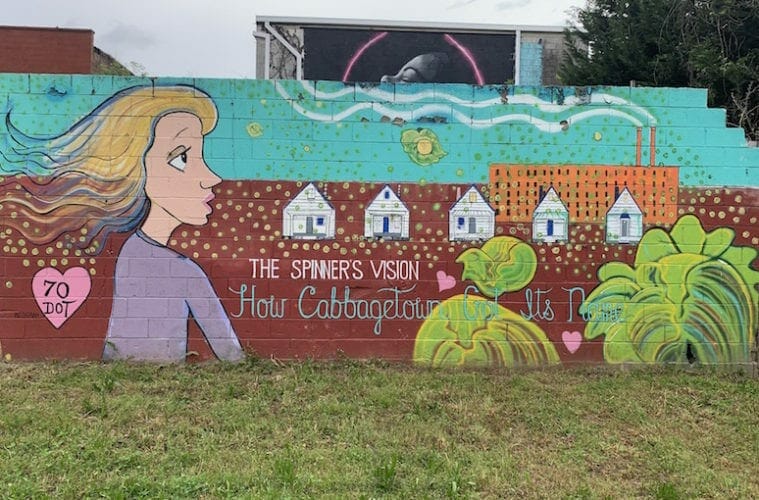 70dot's “How Cabbagetown Got Its Name” (2016) is an early mural on Tye Street. “I suggest that Cabbagetown was named in memory of the 'great cabbage apocalypse when cabbages fell from the sky," the artist says. (Photo by Howard Pousner)

Q&A: “I am a person without a category,” says the folk artist known as 70dot

To check out the Instagram feed of 70dot is to look over the social media of an artist you’d expect to be half ­­– or even a third — of Donna Howells’ age. You’ll find omnipresent youthful optimism of an Atlantan who embraces a sense of community, clearly illustrated in the lively, connected way she depicts her Cabbagetown neighborhood. There’s also the politically attuned artist who responds passionately to race and other social issues. And there is the remarkable energy and industry of a prolific painter who seems to sell her work as quickly as it dries.

Though Howells says she naturally thinks young and frequently forgets that she’s a senior citizen, she’s nonetheless proud of all she’s accomplished in her seventh decade. At 70, she painted her first public-art murals, climbing a tall ladder to single-handedly depict her funny theory of how Cabbagetown got its name. Brimming with a sense of accomplishment, she adopted the artist handle 70dot, which she continues to prefer to her given name. At 76 now, her ladder-clambering days behind her. 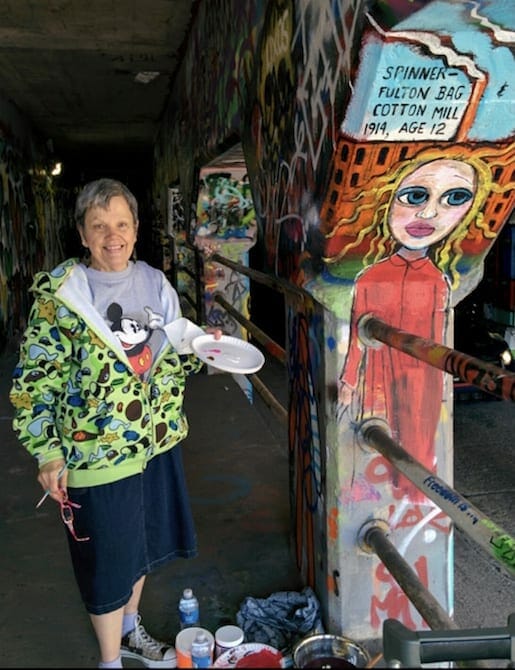 The first time Donna Howells used the name “70dot” was with this 2016 mural in the Krog Street tunnel. (Courtesy of 70dot)

70dot recently welcomed ArtsATL into the basement nest she shares with her husband, Ron, in the home of their son and his family. As their neighbor loudly practiced flinging hatchets at a target, she detailed how losing herself in paints is her own idea of a bull’s-eye.

ArtsATL: You seem to have a lot of artist friends and admirers who are half your age or younger. How did that happen?

70dot: My grandmother remained very youthful until she died at 86. I naturally gravitate to youthful, fun things. In my mind, I’m still young. I appreciate old people, as well, and have volunteered for years at nursing homes. My five lifelong friends and the friend I made in Cabbagetown have died. But I think friendship has little to do with age. I am grateful for my many younger friends and followers.

ArtsATL: You have nearly 3,000 Instagram followers. How do you know all those folks?

70dot: I do not know most of my followers! I have met and become friends with some, through years of participating in the Free Art Friday movement [#fafatl], started here by #evereman. We hide a piece of our free art, and post a photo of it on Instagram, visually hinting at its location. The finder keeps it and posts it as being “claimed.” This free art movement, which I have participated in since 2014, helped me to increase my art production.

ArtsATL: You studied art at SUNY Albany and the Philadelphia College of Art, and yet you have been referred to in the media as a “street artist.” How do you square that?

70dot: Am I a “street artist?” I am a person without a category. I’m not an expert on street-art terminology, but, to me, “street artist” would mean a person creating art on the streets. Atlanta was the first city I’ve lived in that afforded that opportunity, particularly in the Krog [Street] tunnel. My murals lasted over a year there, unlike today when tunnel art is immediately trashed. I wanted to work “big,” and, at 70, with permission, I climbed a ladder and painted an entire wall!

ArtsATL: How many of your murals remain in Atlanta today?

70dot: My Tye Street mural How Cabbagetown Got Its Name remains. It depicts a humorous answer to that oft-debated question. I suggest that Cabbagetown was named in memory of the “great cabbage apocalypse” when cabbages fell from the sky. I have murals at the two Java Cats Café locations. I painted the cat faces; the surrounding mandalas are by Myra Shana (@myra_shana on Instagram).

My last mural project involved leading a womens’ group mural that remains on Tye Street [near Tye’s intersection with Memorial Drive]. The visual concept was mine, but at that time my physical condition prevented me from painting on it much. My friends were enormously helpful. Their names are on the mural which, prophetically before COVID-19, depicts three women masked with bandanas.

I have a remaining #decaturboxproject traffic box on the corner of Sycamore and Church streets in Decatur. It is titled I (heart) Books, because Sycamore leads to the Decatur Library. 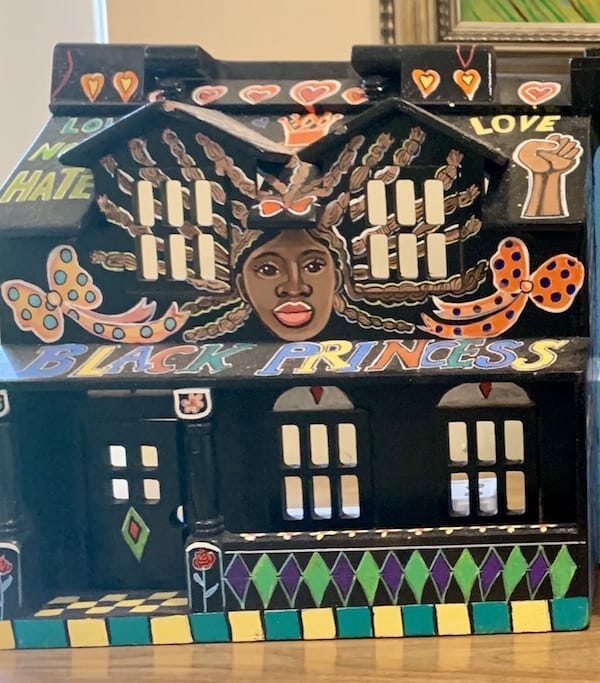 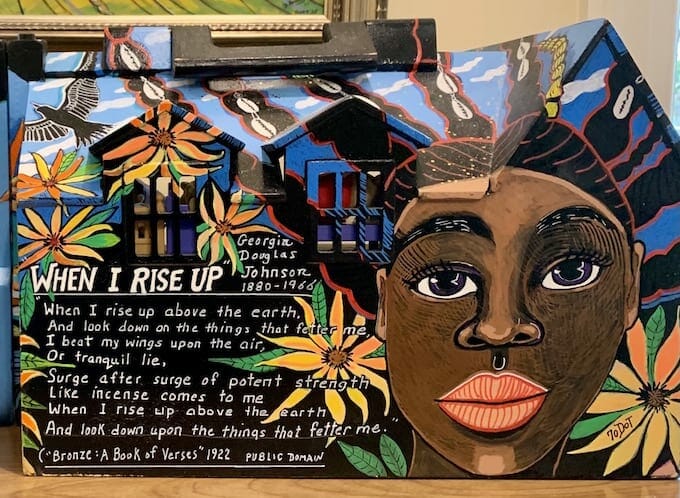 70dot turned an unpainted thrift-shop dollhouse into “Black Princess Dollhouse,” seen from the front (top) and back (bottom). “This is a princess house for young Black girls who may be tired of pink,” she says. (Photo by Howard Pousner)

ArtsATL: You did a lot of research on Cabbagetown when you became a resident, and that sense of history seems to play out in how you depict the former cotton mill community, with many people gathering outside, chatting with friends and family, playing and listening to music, gardening . . .

ArtsATL: But you grew up in the Schenectady-Albany area in upstate New York. Your life was a bit different from a spinner girl’s, right?

70dot: It was like paradise, believe me. I can’t even tell you how beautiful it was. There are no words. We had 5 acres. The house was over 200 years old, and all restored. The forest had trees that were enormous, and I was allowed to just go out with my dog. We would see deer, and I would catch salamanders in the creek — and let them go. Also, there was a big field in the back. Mohawk Indians had lived there, and when the farmer would turn the soil up, I would find arrowheads, a bunch of them. It was just unbelievable. I can’t even tell you how blessed I was. It doesn’t exist in the same way now. Now, the forest is a nature preserve. I mean, it was my forest!

ArtsATL: You often express yourself in an approachable folk art-y style, particularly when you depict animals and historic times in Cabbagetown. Are there particular self-taught artists whose work has informed yours?

70dot: My folk-art style flows naturally, effortlessly. It is almost identical to my later childhood art. My parents could have saved a bundle of art-school money had I understood that being an untrained folk artist was an option, and sufficient to withstand the societal pressure of “success.”

I am a huge fan of Howard Finster. We share our art style and our Christian faith. The delightful animals of Beatrix Potter, who is referred to as “mostly self-taught” were my childhood favorites. 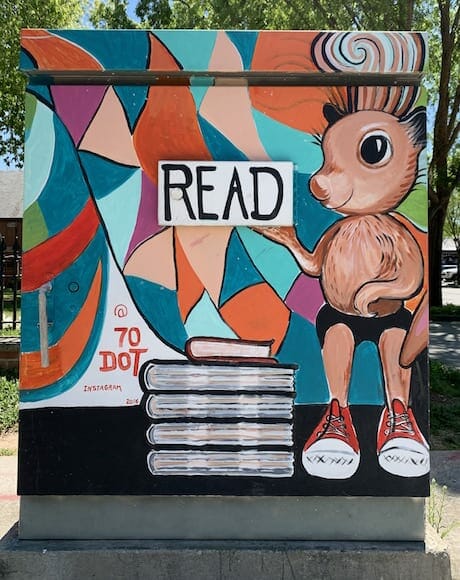 70dot painted this traffic signal box at Sycamore and Church streets near the Decatur Library. (Photo by Howard Pousner)

ArtsATL: Finster, the famed Northwest Georgia folk artist, died in 2001, a few years before you moved to Atlanta. How did you connect with his work?

70dot: I mostly discovered him through Folk Fest [the annual expo that ended in 2015]. And I love to research, so I began to see all his art, and I read about his life and the kind of person he was . . .  just a good-hearted soul. I guess he was eccentric, but I think in a good way. Some people just didn’t totally understand him because I think his mind a lot of times was in heavenly places and it was hard sometimes for people to completely follow him. But I know I would have loved him, and I believe I will meet him in heaven.

ArtsATL: At heart is there one general message that you try to convey when doing social-issue paintings?

70dot: I want people to get along and be happy. But that is not always realistic. I have known sorrow, and I love to make people smile. I offer a bit of love, edification and sometimes humor, through my art.

ArtsATL: When you post your paintings on Instagram, they seem to sell within days if not that same day. What do you think is going on?

70dot: This has been such a blessing, especially during the pandemic when I’d be really stir-crazy otherwise. My art has always sold well, but not to this degree. I think it’s the broad scope of the internet and also the fact that I’m old. People figure they have to get it now or there’s not going to be any more to get! (She laughs.) I am extremely grateful. Of course, the money helps with supplies, but the emotional support is everything.

70dot: I just love to paint. I can paint for hours and not even know. My doctor asked, “Do you get tired?” And I said, “Only when I paint for seven or eight hours.” And the nurse laughed!

ArtsATL: What’s your advice for younger artists who are still trying to find their voice or their audience? 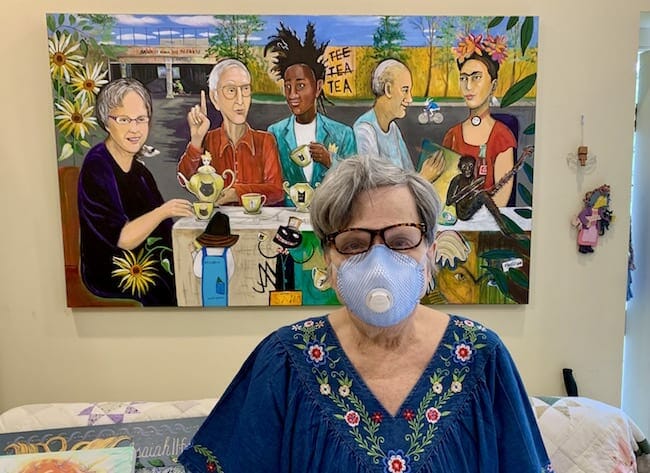 70dot with her painting “Tea Party at Krog Tunnel” (2015), an answer to her socialite mother’s etiquette training. 70dot’s guests are Howard Finster, Basquiat, Picasso and Frida Kahlo. Marilyn the ferret is on her shoulder.” (Photo by Howard Pousner)

ArtsATL: What is your take on Atlanta as a home to artists? What would make it better?

70dot: IMHO, Atlanta is a super place for artists. I would like to see entry forms for art shows greatly simplified. I skip a lot of shows because I cannot deal with the complicated digital forms.

ArtsATL: Did you have art heroes growing up, and are there particular artists who inspire you today?

70dot: My art hero as a child was Picasso. I had a full-color book of many of his works, which I studied. His cubism unnerved me a little, but I loved his Pink and Blue periods. I was fortunate to see his large nude piece at the High Museum a few years ago. Faith Ringgold, Frida Kahlo, Basquiat, Picasso and Finster continue to inspire me.

ArtsATL: You had a dream about Finster. Do you mind sharing?

70dot: I had that dream about a year ago where he was standing next to me and he had his hand on my shoulder, and it just meant so much to me. It just made me feel like he’s aware of what’s going on in the world, that he would say, “Keep working!” That’s what I thought he would say to me: “Keep working!”