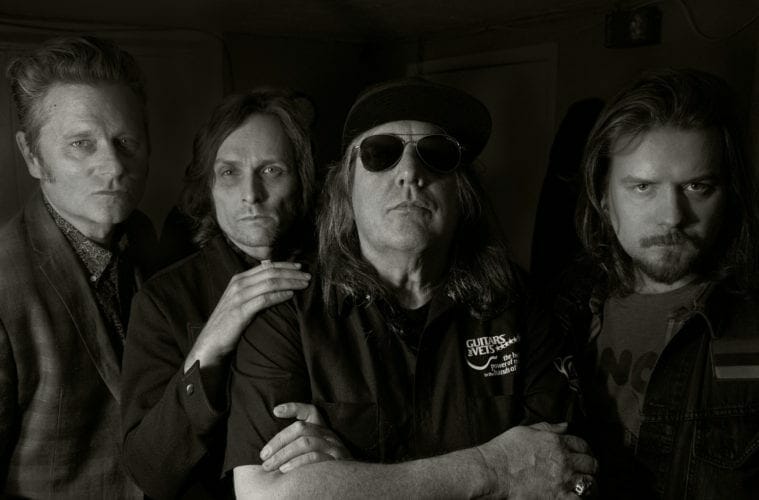 Drivin N Cryin's first new album in a decade is out June 21. (Photo by Carlton Freeman)

It’s safe to assume that when the Kevn Kinney-fronted Drivin N Cryin released their prophetically titled Scarred but Smarter debut in 1986, few of their followers — or even the band itself — thought they would still be active 33 years later.

But here they are, not just alive and well but thriving with a June 21 release of Live the Love Beautiful. It’s not only the band’s first full-length album since 2009’s The Great American Bubble Factory — there were four EPs released over the course of 2012–14, each showcasing a different genre like punk, singer/songwriter, psychedelic and Southern rock that influenced the band’s sound — but one of the most powerful and cohesive sets of the quartet’s extensive career.

Not surprisingly, though, it has occasionally been a rocky trip; members have come and gone, and only two originals — Kinney and Tim Nielsen — remain. From 1997 to 2009, there was no new Drivin N Cryin music at all, during which front man singer/songwriter Kinney released a solo album called Sun Tangled Angel Revival.

The Atlanta-based rockers made a minor national splash with 1991’s Fly Me Courageous, yet hometown audiences have always enthusiastically supported them, even in their leanest years. Anyone who has been to a local show and witnessed the entire audience singing along to “Straight to Hell” or “Honeysuckle Blue,” a couple of the band’s most recognizable tunes, understands the dedication of their local fans.

ARTS ATL caught up with Kinney just before the release of his band’s ninth album to talk about its conception and the band that has become his life’s work. Drivin N Cryin has just started an extensive tour that brings the group to Center Stage on June 28 and later to the UK, Spain and the Netherlands. ARTS ATL: This is your first Drivin N Cryin disc in a decade, but you released a compilation from the four EPs in 2016.

Kinney: It was like letting people in on the process if you were an A&R person. You’d get these 20 songs, then you’d have to whittle them down to the 10 you wanted. I wanted to give the people all the songs and let them create their own mixtape, and the final one was what I would make. I called it Best of Songs, and everyone thought it was a greatest hits record and asked “Where’s ‘Straight to Hell?’” It was very successful because I got to use different studios and producers. I’m not a studio musician — I really hate being in a studio. The five-song EPs were perfect for me because you make them in a week. You add five more songs to an EP, and it becomes an album, which takes three months — I guess because you have to build a story arc. We were really lucky that [ Live the Love Beautiful] went a little bit better because we all sat together and wrote about 90 percent of these songs for the record. It’s not like a hodgepodge of different songs over the years.

ARTS ATL: Tell me about Aaron Lee Tasjan — once a touring member of Drivin N Cryin — who produced this album.

Kinney: I met Aaron at a birthday party. He played “Indian Song,” and I invited him to go on a Holland tour with me for two weeks. I didn’t know him, but he knew who I was and was excited, so he came. We played a lot of music together. I asked him to join my band, and he played with us for about a year (2014–15).

ARTS ATL: How did you decide to have him produce it?

Kinney: Chuck Prophet, who is a friend of mine, and Aaron have been making these great albums. They’re kind of complex, and they’ve got real depth and substance to them. I don’t know how to do that. Some people ask me to produce them. I say, “I can make you sound like me, but I can’t make you sound like you.” A good producer can make a band sound like they’re supposed to sound. Aaron knows most of my songs. Getting to know me and getting inside my head is half the battle, and he’s already got that part down. He can bring out the best of everybody else [in the band] because he already knows me. Sometimes, when you use a producer, they latch onto just the singer. For this album, we went to Nashville’s Welcome to 1979 studio. That place sounds amazing — it’s all vintage gear. Those are the decisions producers make. I didn’t even know about this place. I would never think about using different guitar parts. It’s not like everyone playing all the time. There’s a whole generation of people who don’t like The Beatles, but most of us that grew up in the ’60s have just been trying to make Sgt. Pepper’s Lonely Hearts Club Band over and over again. I’ve been trying to make Sgt. Pepper for 33 years.

ARTS ATL: Is this your most autobiographical album?

Kinney: I don’t know that this is my most autobiographical. I think they all are pretty real. This one is topical [with songs] like “Free Ain’t Free.” There are a few songs on here from the 9/11 sessions. We started recording an album on September 10, 2001. One of those [songs] was called “Spies.” Since the climate of America wasn’t right to put out a song with lyrics “I’m a spy for the underground,” I put that one on the shelf. I’ll say it’s my most self-confrontational album. I’m confronting a lot of things I’ve been avoiding. There’s a song called “Song for Me” that I open up my folk shows with to quiet the crowd down. The chorus is “This song’s for me. / If you want to, you can listen.” That’s what this record shares with people too.

ARTS ATL: You play solo acoustic shows in addition to the electric ones with the band. Which do you prefer? Kinney: I prefer the band right now because I’m totally out of practice. I’m so painfully shy and introverted and avoid social situations. I don’t go out very much. The solo thing is tough. It’s like comedians practicing stand-up. You can’t just get up there and do it. With a rock ‘n’ roll band show, if people aren’t hip to it or have other things to do, I don’t care because I got this army, this tornado of sound, behind me, and we’re just going to have fun. So I don’t take it personally with the band.

ARTS ATL: Do you see current comparisons to the Atlanta scene you were a part of when Drivin N Cryin started in the mid-’80s?

Kinney: Oh absolutely, yeah. I think the DIY scene is very close to where Drivin N Cryin and Uncle Green was in ’86. We were all best friends. I don’t know what the rap scene is like. That’s a whole new huge side of the world. It’s hard to keep up with all the new music coming out of that.

Kinney: If the band is happy like we are, it’s going to come across. We’ve accepted the fact that we’ve created our own world. We’ve been working, trying with iTunes to get Southern rock out of our description. I don’t know where we fit.

ARTS ATL: Do you have any advice for new bands starting out?

Kinney: Always play every show like it’s your first and your last.