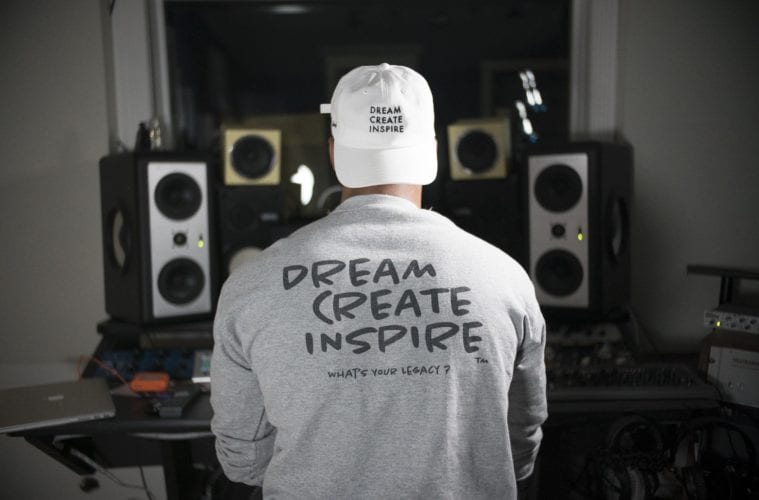 The Dream, Create, Inspire Tour stops by Atlanta for a collaborative launch concert of hip-hop artists at Cox Hall at Emory University on May 7. (Courtesy of DCI)

Wayne Watts, founder of Dream, Create, Inspire, is the epitome of optimism and dedication. Founded in 2016, the organization brings together the music community through open mic nights, songwriting workshops, networking events and concerts. The Dream, Create, Inspire Tour stops by Atlanta for a collaborative launch concert of hip-hop artists at Cox Hall at Emory University on May 7.

Born in Baltimore, Maryland, Watts was raised in a music-driven household. His mother played rhythm guitar, and his father played bass in a funk band called DIT Band. At eight years old, he began to perform for his family and friends, but it wasn’t until 17 that he finally recorded his first album, That’s My Boy, under the name DK. Watts holds a degree in communications from the University of Maryland and spent most of his days playing music.

After graduation, Watts fully immersed himself in the music industry in as many ways possible while working as a substitute teacher — nightly studio sessions, trips to music conventions and more filled up the pages of his calendar. Watts eventually found a way to combine the love of music with teaching students through Dream, Create, Inspire.

The organization has roots in nine different cities including Philadelphia, Memphis, Dallas, Houston, New York City, Baltimore, Denver, Austin and Atlanta. During the Atlanta performance, Dream, Create, Inspire songwriting workshop participants will perform songs that were created during the workshops.

ARTS ATL sat down with Watts to discuss a lifetime of musicianship, goals for the organization and more.

ARTS ATL: How did you come up with the idea for Dream, Create, Inspire?

Wayne Watts: I was substitute teaching at the time because it gave me the freedom to still do music gigs. But when I moved to Denver around 2010 and started to see the flaws in teaching and how lessons could be taught in more innovative ways, it helped me think differently. I started to see how kids were passionate about music and about social media, and I started wanting to see how I could provide a way for them to express their creativity through music. So with that, I began working with young people to mentor them and get them performances. Soon, I created an after-school program that would help young people put songs together. This led to me working with Destiny Hardney — who does event planning for young people — and we teamed up to start the Dream, Create, Inspire Tour. We really just looked at all the things we had already been doing and turned it into a larger platform. ARTS ATL: I see that in each of the nine cities, you plan on doing songwriting workshops. What has been the most rewarding act you’ve accomplished so far?

Watts: We really narrowed in on the songwriting aspect of service — there are really two, hugely gratifying moments of this service: One is when you see the spark of creativity light up in a kid and you can tell there are no limits to their imagination. [You see] how everyone can start at the same place, but the creativity is where they can separate themselves. And the second act of service is seeing the musicians who volunteer to work with us get just as excited about the music as the children, especially when they hear a kid bring something to the table that they wouldn’t have even thought of.

ARTS ATL: Can you walk me through the process of how you create a song during a concert?

Watts: We have the kids sit down, and we start them off with an interview. They interview a volunteer or someone at an organization and ask questions like, “Why did you choose your field? If you were to leave your field, what would be the reason? What are three words that motivate you? If you could choose someone to sing a song about your life, who would you choose?” Then, we get them to sum up each interview in just three words, and we condense the interview into that. And then, we find the best phrases to turn into catchy lines for melodies, which becomes the hook. For performances, we allow them to write verses, and that’s what becomes the show. People from six years old to 67 have all been a part of our events.

ARTS ATL: What are the long-term effects of the Dream, Create, Inspire Tour?

Watts: There are two long-term effects. One, from an educational standpoint, would be the incorporation and acceptance of the curation instead of the regurgitation of information. As an African American male, I felt as if the education system wasn’t set up for me. The emphasis of regurgitation becomes the end-all-be-all of what knowledge looks like, and this is an important step to show that what we do with the knowledge is the biggest factor in life. And two, from the music industry standpoint, it can change the dynamic of engagement with the consumer. It can make the consumer an active member of the music instead of just an observer.

ARTS ATL: As an aspiring musician and entrepreneur, what is the legacy you would like to leave?

Watts: I would say that my legacy is to empower and to show that creativity is connection. The more creative you are and the more you connect it to other things, the more you are able to create a purpose within your life. And the more that other people are seeing you in your purpose, the more people that you will be able to inspire to live within their purpose as well.