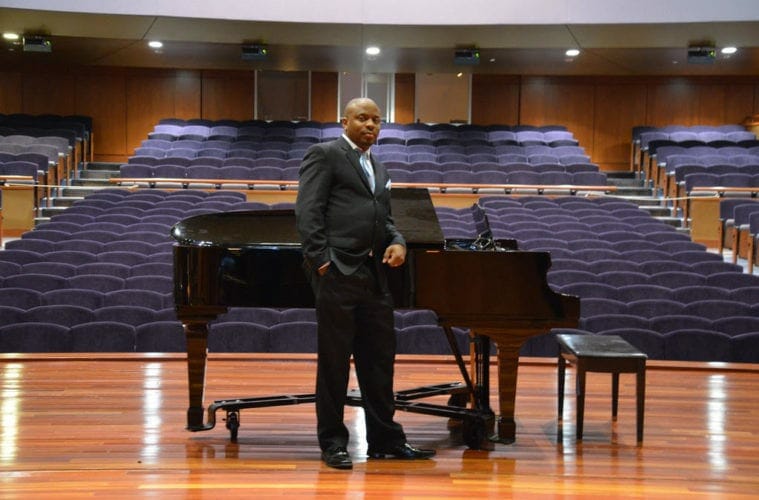 Chad “Sir Wick” Hughes, director of bands at Morehouse College, is making a slow but steady rise through the ranks of Atlanta musicians who want to make a difference in the cultural landscape of composition. He has studied extensively with the likes of James Aikman, Erik Santos, Bright Sheng, Curtis Curtis-Smith, Dinos Constantinides, Craig Weston and Pulitzer-Prize winning composer William Bolcom, and his award-winning pieces have premiered to great acclaim in around the country.

Hughes has been invited to conduct his works with several prestigious orchestras, including the Cleveland Chamber Symphony and the Indianapolis Pops Symphony. He’s received commissions to have his works performed by conductors of the Metropolitan Opera Orchestra and Detroit Symphony Orchestra, among others. Hughes has served as adjudicator and clinician in Georgia, Kansas, Louisiana, Michigan and Tennessee. Chad Hughes is an acclaimed composer in addition to his work as the director of bands at Morehouse College.

His talents extend well beyond the scope of the average practitioner, as his work encompasses the multiple skills of conductor, trombonist, recording artist and educator — not to mention his expertise in the field of music technology. “Sir Wick” has performed with Kid Rock, The Temptations, Martha Reeves, Dwele, Tia Fuller, Aretha Franklin, Marcus Belgrave and Marc’s Project, and he’s arranged for Pharoahe Monch and Young RJ.

He won first prize for his Symphonic Suite No.1 in the Columbia Summer Winds Outdoor Composition Contest. His novical soundtrack, “A Tale of Two Fools,” reached No. 1 on the UK soul charts.

The Detroit native recently sat down with ArtsATL to talk about his life at Morehouse, the challenges of uncertainty this fall due to the inescapable pandemic and how the church plays an immense role in social justice.

ArtsATL: What are your duties as director of bands?

Chad Hughes: I came to Morehouse in 2014. I direct the marching band, concert bands and jazz band. I teach trombone, euphonium, orchestration and history of jazz. There are 45 music majors in the program. The students are wonderful. They’re hungry to learn, and they come with a great work ethic.

ArtsATL: Let’s talk about Covid-19 and how the virus affected your music program.

Hughes: I noticed the severity of this thing in November, December when I was seeing reports on CNN coming from China and South Korea. I said, “I hope this never hits the United States.” Well, it did, obviously.

ArtsATL: Your program took a direct hit. How can your bands perform with masks on?

Hughes: Well, it definitely hurt recruiting. I don’t know if it’s hurting retention yet. I won’t know that for another month or so. If there aren’t athletics in the fall, that will cancel the marching band. Depending on how long we are in quarantine, it‘ll affect the potential to participate in jazz band and concert band. You can only do so much virtually. It’s hard to teach. You can’t do any drills if you can’t be next to a person.

Hughes: Spring break was about to happen. Me and Dr. Michael Decuir — the director of bands at Clark Atlanta University — came together to combine the symphonic bands of Morehouse College and Clark Atlanta University for the first-ever joint concert in the history of the Atlanta University Center. It was scheduled for April 7. We were six weeks away, playing Grade 5–6 literature (indicating a high level of performance) on that concert: Festival Overture, Second Suite in F, and two new pieces that were going to be written for me. But Covid-19 took away that great moment. I also had invited Dr. Decuir to be a special guest soloist on our April 6 jazz band concert. That didn’t happen. Chad Hughes wants to write a musical tribute to an aunt he lost to the Covid-19 virus. (Photo by Robin Castle)

ArtsATL: When did you start getting notices from Morehouse about rescheduling?

Hughes: During spring break. They extended spring break an extra week, so they could get together and discuss what was going on. At some point I realized, “We’re not going to have a concert, and musically it’s going to be bad for us.”

ArtsATL: Did they encourage you to do any kind of online conversion?

Hughes: The whole college switched to online teaching. I taught trombone lessons, history of jazz and my wind seminar class online. I had the students do musical presentations and go over excerpts for the instrument. But of course, we didn’t have concert band. It was just no way possible for that. And we couldn’t have jazz band either. But history of jazz went fairly well. It just really put an impediment for a concert band and jazz band. For the jazz band, this would have been our second concert. And for concert band this would have been our first one, but it was . . . gone.

ArtsATL: How did the virus affect you personally in terms of gigs you had outside of Morehouse?

Hughes: I was scheduled on April 23 to be guest artist/clinician for the Newton County Schools Honors Jazz Band. That got canceled. I had a premiere of my tuba/euphonium piece that was to premiere on April 8 at Penn State. That also got canceled.

Hughes: I lost several friends. I lost an aunt to this virus. I want to write a piece, a musical tribute. Because we were really cool. I mean, she was my aunt and she was also really close to me in age. She was like a big sister, so that has really hurt. She was my grandmother’s caretaker, so that really affects the family; it’s affecting me now. We’re still trying to figure out, “Who’s going to watch her daughter? What school is she going to go to? Who’s on watch over Grandma?” It’s a really big deal.

ArtsATL: How has the Black Lives Matter movement and all of the racial tension affected you personally?

Hughes: What I’ve appreciated is some of the discussions on racism, particularly in the church. More than ever before, people are seeming to understand systemic racism. There’s still some people who don’t understand it, but now there has been more civilized dialogue on what needs to happen and just how blacks have really felt since the beginning. And now the majority of people are not looking at this country with rose-colored glasses anymore.

ArtsATL: Is there any overlap between your artistry and the movement? Has there been anything that you’ve created musically to help deal with the social tension?

Hughes: That’s a very powerful question. And it’s one that I’ve never really wanted to answer, because personally I felt that for a long time, until recently — before Covid-19 — that with the exception of jazz, a lot of times people only wanted to play black music during Black History Month. They didn’t want to hear your symphony, they only wanted to hear about the struggle. They didn’t want to hear your real programmatic music, your absolute music. But now it’s all applicable, because our voice is finally getting heard. I’m more open to writing about the struggle than ever before.

ArtsATL: Beyond Morehouse, how would you define your role in the Atlanta arts community?

Hughes: I’m still finding myself in this role. I’m getting to know a lot of great musicians and teachers from the Fulton, Cobb, DeKalb, Henry, Fayette and Newton counties. The teachers here are absolutely some of the finest in the country. Even in the churches, there are great musicians.

ArtsATL: Is the church playing a role in helping black people get through this racial tension?

Hughes: Yeah, absolutely. The discussions are being had — especially in multicultural churches — to truly understand what the black and brown brothers and sisters have been going through for such a long time.

Hughes: Serious contributions! Melvin Jones on trumpet. Russell Gunn on trumpet. Kevin Smith on bass, Joe Gransden’s Big Band. I’m just trying to meet all these wonderful musicians and really help out as much as I can. Even on the classical scene here, you have Lawrence Brownlee and Morris Robinson — two of the top black opera vocalists in the world. Morris just recently performed the Mahler’s Second with the Atlanta Symphony Orchestra. About a month later, he did Porgy and Bess with The Atlanta Opera. So you’re seeing some of the highest art — and black people are in it.