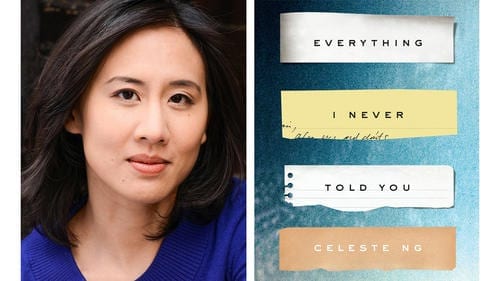 Celeste Ng’s debut novel Everything I Never Told You is a poignant, penetrating investigation of one family’s tragedy. Ng (pronounced “ing”) unravels the story of the Lee family after the disappearance of Lydia, the second child and oldest girl of two parents whose lives have sharply deviated from the futures they imagined. 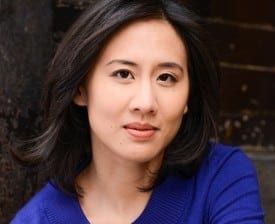 Marilyn and James Lee struggle to balance their reality with their dreams. Marilyn planned to become a doctor before falling in love with James, a Chinese immigrant who has become an American history professor. A marriage between a white woman and an Asian man in the 1950s was unusual, but Marilyn and James ignore the protests of family and plan a bright future. By the 1970s, when the primary portion of the novel is set, the brightness has dimmed. Marilyn’s medical goals have been eclipsed by family life. James still struggles with being one of a handful of Asians in his field. They relieve their personal frustrations by casting their hopes onto their children.

Nath, Lydia, and Hannah have struggles of their own. Nath yearns for his father’s approval. Lydia feels burdened by Marilyn’s expectations to become a doctor. Hannah circulates around the older members of her family, seeing all but remaining invisible.

The ominous opening line — “Lydia is dead. But they don’t know this yet” — sets the course for the novel. Lydia’s death, though grievous, nonetheless offers the way towards discovery for the rest of her family. As they search for an explanation for her death, they unearth a vast realm of secrets and misunderstandings that underpin what they believed was a happy life. This path of discovery transforms the novel from a singular tale about a tragic family to a larger rumination on familial relationships.

It soon becomes clear that Ng’s novel, so detailed yet so expansive, is not just about the Lees, but about anyone who has hoped, cherished, loved and regretted inside a family unit. This is sure to be a classic.

ArtsATL: How did you get the idea for the novel?

Celeste Ng: The root of the story came from something my husband told me from his childhood. He and his friend were both 8, and they were playing at my husband’s friend’s house. There was a lake behind the house. While they were there, the friend pushed his 5-year-old little sister into the water. In this case, the parents were nearby, and she was pulled out. Everything was fine.

But I kept thinking about why he would do that. Was he just a troublemaker? What was the relationship between him and his sister that would lead him to do something like that? What was their relationship like afterwards? Was this something that his sister held over his head? I was fascinated by this idea of a girl falling into the water and trying to figure out what it was that got her in there. That was the very first seed of the story. 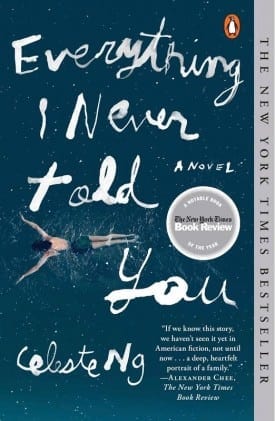 ArtsATL: Why do you think this novel has resonated so much with so many people?

Ng: I think this book has spurred people to think about their own relationships with their parents or their children or both. And the expectations that hover over these relationships. I realize now that I’m a parent, it’s almost impossible not to have some idea or wishes about what your child is going to be like. It’s hard to not push your child in a certain direction, to not think that you can shape them.

As a child, you have a sense of your parents’ expectations, what they want or don’t want, and you react to those desires. Yet as a parent, we often forget what that pressure can feel like.

The exploration of these issues in the novel is something that people have really connected to. I’ve had a number of readers tell me that this book has made them rethink their relationship with their parents or their children, which I take as a huge compliment.

ArtsATL: The novel tackles a variety of issues: interracial marriage, parent-child relationships and growing up as a minority in America. For you, what is the main theme?

Ng: For me, the central issue is about people wanting to be seen and understood by other people. Everyone in the novel struggles to be seen in the way that they see themselves. You have a way you see yourself on the inside, but other people may not see you that way. Every one of the characters struggles with that.

The father in the story is always seen as an Asian man first, but he wants to be seen as something different from that, as an expert in the field or as a father, rather than as an Asian man or an Asian father. The mother in the story wants to be seen as someone who has an intellect and a life of her own, rather than someone who is a caretaker of her family.

I think it’s a human thing, something that everyone needs — to be seen. I’m fascinated by that idea: that who you are on the inside is not necessarily how other people see you. It’s something that I’ve explored in a lot of my fiction.

ArtsATL: The youngest daughter, Hannah, is not integral to the plot, but she is nonetheless a fascinating character. Why did you include her?

Ng: Part of it had to do with the balance and structure of the family. If there were only the older children — Nath and Lydia — then when Lydia disappeared, the balance would be off. I realized, structurally, that I needed a third child there. Thematically, I wanted to have someone in the family who could see more accurately than anybody else. Because Hannah’s a child, she’s not able to interpret everything that she sees and put it together, but she’s the one who notices when something is wrong. She can tell when people are upset. She doesn’t entirely know why.

She’s the outside observer. In some ways, she sort of functions as the writer character in the book. She’s the one who’s trying to make the story, to make sense out of everything that’s happening.

ArtsATL: Although the novel is set in the 1970s, many of the challenges the characters face feel modern. Why is the novel set during this earlier time period?

Ng: The issues the characters struggle with seemed more poignant in the ’70s than they do now. As I started to get to know the family, I realized that this was a marriage in which the two parents come from different cultures. And the mother is struggling with, as we might say now, “having it all.” When the parents got married in the 1950s, an interracial marriage would have been a much stranger thing for the people around them than it is for us. We’re used to seeing people of different races marrying. Likewise, for the mother at that time, she was of the generation when women would see their daughters getting so many opportunities that they themselves didn’t have or would ever have. It seems like those issues, although they’re clearly with us now, were more highlighted in the 1970s.

ArtsATL: How much of the story comes from your own experience?

Ng: Nothing from the plot comes from my own experiences. I have one sister, and my whole family gets along. I’m very lucky in that respect. Some of the details of the story, however, I stole from real life. I grew up in Pittsburgh and Cleveland, and in both of those places, my family was one of very few Asians. I had the experience, as the children in the novel do, of looking very different from everyone else around me. I didn’t have the experiences that they had, though. I had a pretty happy childhood, and I felt at home where I was, but I knew what it was like to be the only person in your community who looks like you, who has a different culture that they live at home.

My mother is chemist. She has a Ph.D. She does research. I saw what it was like for her to be the lone woman in her department. The lone woman who was the chair. I saw the gender politics that came into the ways she was treated, either intentionally or unintentionally, and I wanted to explore those, too.