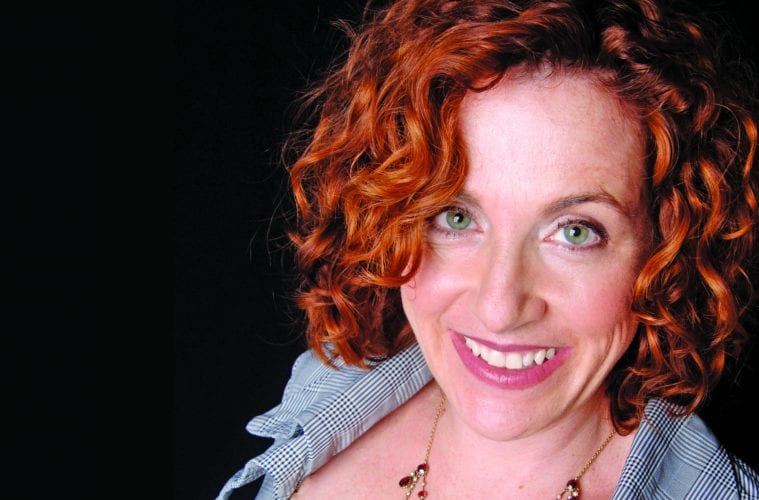 Ayelet Waldman admits she’s led a charmed life. A former criminal defense attorney, she began her literary career penning mysteries, then delved into essays and novels, examining themes such as legacy, loss and the process of healing.

In her latest, the stunning Love & Treasure, Waldman explores the plight of the Hungarian gold train, a convoy discovered by the U.S. Army in 1945 in Salzburg, Austria, containing the furniture, jewelry and gold that the Hungarian government had plundered from the country’s Jewish population during the Holocaust.

Deploying vibrant, engaging prose and exquisitely flawed but heartfelt characters, Waldman traces the origin of one piece through Budapest, Salzburg and Maine, to a reunion that is both bittersweet though gratifying, and inevitable though unpredictable.

Waldman will appear at the Marcus Jewish Community Center Atlanta to discuss her book on November 6 as part of the book festival of the MJCCA.

ArtsATL: I hadn’t heard of the Hungarian gold train until I read a review of your novel. When did you first learn about it?

Ayelet Waldman: It was actually very random. I had never heard of the gold train either! I had been flirting with the idea of writing about the Holocaust for a long time but had avoided it because of what I call the Life Is Beautiful (the movie) problem – a feel good, life-affirming tale about something as horrible as the death camps. I didn’t want to write that kind of exploitative book, and I didn’t trust that I had the skill to write about the Holocaust without being exploitative. (This is why I decided to delete a scene I had initially written that takes place at Dachau.)

I also wanted to find a way to broach the topic of the Holocaust from a different angle. This made me think about art — an area I don’t know much about. When I write a novel, I like to learn about something new.

I had already been planning a trip to visit a friend in Hungary, and before making the trip, I Googled the terms Holocaust, art and Hungary. Two seconds later, I had the topic of my novel: the Hungarian gold train was the second hit. I can remember running out of my studio and saying to Michael [her husband, author Michael Chabon], “What have you ever heard about this?” He hadn’t heard about it, either. We were both completely astonished that this history existed. And I knew, when I read the piece online, that the Hungarian gold train would be the thread that connected all of the elements of my novel.

ArtsATL: Your fear of exploitation seems to have manifested itself in the character of Jack Wiseman, the Jewish lieutenant who discovers and later oversees the contents of the gold train.

Waldman: Absolutely. Because it’s my own preoccupation, it becomes the preoccupation of a character in the novel. I was recently in Israel for the first time in more than 20 years, and I overheard a few Israelis criticizing a new novel about the Holocaust. I think Israelis have a kind of cynicism because they’ve seen so much of the kind of writing that condescends about that time period — pernicious qualities of benign stereotyping. Hearing this kind of criticism about another Holocaust novel made me realize that I had been preoccupied with the right things while writing Love & Treasure.

ArtsATL: The first part of the novel takes place in Salzburg in 1945–1946, when U.S. soldiers first apprehend the gold train. The second part is in 2013 in Budapest and Israel during an attempt to reunite the peacock pendant to its original owner. The third takes place in Budapest in 1913. What inspired you to use this structure, specifically the section occurring in 1913? Waldman: I’m a big fan of Michael Cunningham’s The Hours. I wanted to structure my novel like The Hours, with three different sections that all worked together. I knew I would set one of the sections during the years preceding World War I, when Hungarian Jews were secure, confident and the most assimilated, and I knew I wanted to write about a young woman, Nina Einhorn, chafing against the social norms for women at that time. While conducting research in Hungary, I learned about the International Woman Suffrage Alliance Congress, which took place in Budapest in 1913. It was the perfect political climate for Nina’s narrative, for her to emerge as an activist.

ArtsATL: Parts two and three are told from the points of view of art dealer Amitai Shasho and Freudian fan and psychologist Dr. Zobel, even though the narratives in those parts primarily focus on two other characters, Natalie Stein, Shasho’s client, and Nina, Dr. Zobel’s patient. Did you ever consider writing from Natalie or Nina’s points of view instead?

Waldman: I didn’t. I wrote from Amitai and Dr. Zobel’s points of view from the beginning. First of all, I wanted to see if I could write from the male point of view, to see if I could do it well and do it with authority and confidence. And second, this idea of the secondhand story — the story of a character told from the point of view of an outsider — was thematically consonant with the concept of writing about the Holocaust as an outsider. What does it mean to tell someone else’s story from another set of eyes? It was a craft test for me. Can I do this? Can I bring characters to life without inhabiting these particular characters? It made writing the story more difficult but also more exciting.

ArtsATL: You also consider the tension and bond between identity and culture. What inspired this?

Waldman: When I’m joking around, I say that Love & Treasure is my Jewish identity crisis — that I basically put all of the aspects of my Jewish identity into a book. But the novel itself is more universal. I was trying to show the ambiguity and complexity of the relationship between culture and identity and how much the struggle to understand, accept or establish our own identities impacts our lives. It seems like this pursuit would be an intellectual exercise but, in reality, the relationship between culture and identity is the very definition of who we are.