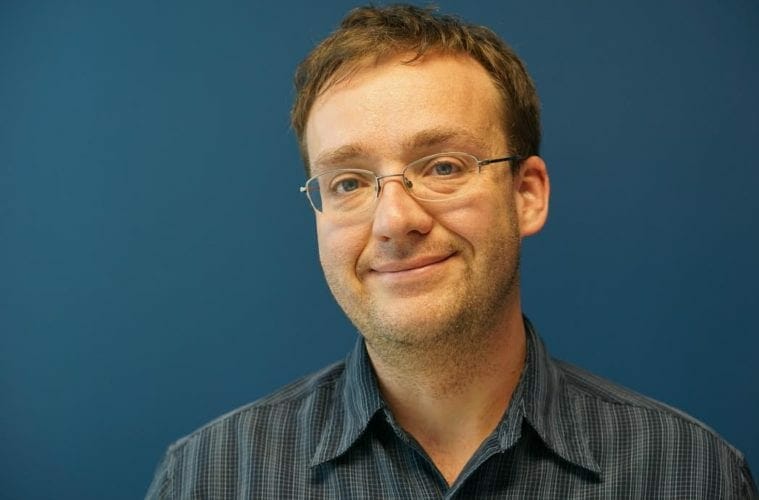 Tim Westover received the US Selfies Book Award from "Publisher’s Weekly" and BookBrunch for his novel "The Winter Sisters."

In the second novel by Tim Westover, The Winter Sisters (2019), the self-described Southern transplant deftly explores the tensions between science and superstition, medicine and magic, in 19th-century Lawrenceville.

Readers meet Dr. Aubrey Waycross, a well-regarded physician and staunch believer in the bleeding and blistering of scientific medicine in the early- to mid-1800s. He arrives in the dusty town of Lawrenceville, beckoned by the local minister, who hopes Waycross can convert the superstitious townsfolk from following folk medicine to believing in Hippocratic medicine. He’s also been called in to investigate a mysterious illness rumored to be making its way through the populace. Waycross finds himself immediately at odds with Lawrenceville’s local folk healers, the Winter Sisters, and face to face with a few things science can’t explain. The Winter Sisters is a novel about medicine, magic and what they say about our personal beliefs. It’s also, in the context of our current global health crisis, a timely story about the importance of learning to separate fact from fiction and science from faith and keep a society well. The Kirkus Review gave the novel high praise: “Solid writing and strong characters buoy this examination of a captivating moment in American history when old beliefs encountered the new. An enthralling, cozy tale set in an era when folklore reigned over science.”

ArtsATL: You call yourself an adopted Southerner. You were born in Rhode Island, educated in England and traveled frequently to Russia. Why did you choose to settle in metro Atlanta?

Tim Westover: It’s not so much that I chose the South, but that the South chose me. My parents ended up here — my dad worked at CNN for many years. I wanted to get away but needed to come back to help take care of them, and I had a job waiting for me. Once I found myself back here, I began to explore what I was seeing around me. Some of it was coming from maybe the disaffection of living in the suburbs — “Why am I stuck in Lawrenceville, Georgia? I could’ve been in Moscow.” But actually Lawrenceville, Georgia, is more interesting than you may think it is when you’re first driving through and passing all the Chili’s restaurants.

ArtsATL: The Winter Sisters explores this tension between science and religion, magic and medicine. Your main character starts out as a staunch believer in the Hippocratic method, but through the Winter Sisters, comes to see validity in some folk-based healing methods. Can you talk a bit about drawing out those tensions?

Westover: That’s kind of that connection to religion, the belief in the medicine and the power of — some people would call it the placebo effect, some would call it mind over matter — but it’s absolutely a real thing. What’s this capability that we have in us, that if we believe in something strong enough, we can create a physical effect? That almost feels supernatural in its power. If you believe hard enough that this tonic will heal you, then it absolutely does, in some people, in some cases, to some extent. And why do we have to trick ourselves into doing that? Why do we have to have this structure of belief, whether it’s coming from a religious background or a tradition/heritage background that awakens that?

I certainly don’t have an answer, and there’s many possible valid answers. I intentionally want people to think about that in their own way and just apply their own beliefs and ideas. Some of that, too, was my own struggle with those particular ideas.

ArtsATL: You were able to create a voice for each character. They were colorful and authentic. A lot of times when people write about the South, the place and its people get reduced to a kind of caricature or trope, but you avoided that. How did you develop these characters?

Westover: Right, it’s that, “Well, bless your heart and bring me a mint julep.” I think it comes from reading as much as possible — primary sources when you can — which we do have a lot of for the more educated characters in the book, like the preacher and the doctor. Those were the ones whose writings tend to get preserved. With other characters, that doesn’t happen as much, but you can get an angle on it from reading as far back in the past as you can. And also just being conscious to avoid the stereotypes. Because in reading, you get some voice for what’s authentic.

ArtsATL: You included the real story of how Crawford Long became the first doctor to operate painlessly on a patient using ether as an anesthetic, one of Dr. Waycross’ favorite remedies. The Grove’s Tonic in the novel was real, too, a remedy peddled in the 19th century. What other local lore did you use?

Westover: I tried to keep all of Lawrenceville’s geography and architecture as best I could. All of the place names, like Hope Hollow — I couldn’t have made up a better name. That’s real. It’s just south of Lawrenceville in the Grayson area. I tried to use as much of that as I could, occasionally having to tweak things for narrative purposes.

All of the folk remedies came from Foxfire books, or something older or from a modern herbal. Those were ideas that were present in Appalachian folk medicine, or spirituality or healing rituals. For example, driving a nail into a [skeleton’s] skull to try and break headache pain, all of that great stuff about having to steal dishrags from people and then burying them. I thought that was very interesting. The other patent medicines in the book — the Elixir Salutis, it’s misspelled in the book, but that’s because it’s misspelled on the label. One of the medicine show speeches that Thumb gives for the Elixir Salutis, that’s 99 percent right from the advertising copy. I just had to tweak it a little bit for grammar: “For sure results, have faith.” It was the perfect theme of the book.

ArtsATL: Waycross seems to be a staunch believer in the scientific ways of healing. At first, he’s averse to folk remedies. But there’s such irony in the fact that some of the Hippocratic methods he used were outlandish and ridiculous themselves. Bleeding people with a lancet, for example. Was that irony intentional?

ArtsATL: Waycross was a man of science who was willing to open his mind to new information, that maybe there’s validity in ancient remedies, that maybe Hippocratic medicine and folk healing can work together. Do you still lean more toward medicine than magic?

Westover: On my personal beliefs, definitely. But I don’t want to close us off to a scientific exploration of those herbal and magic practices. Because something works there. Things that used to be called herbs are now prescriptions. The particular strain of penicillin we found most effective going into World War II, the one that we could replicate the fastest, was found growing on a melon at a farmer’s market in Illinois. It wasn’t genetically engineered. It came off a melon.