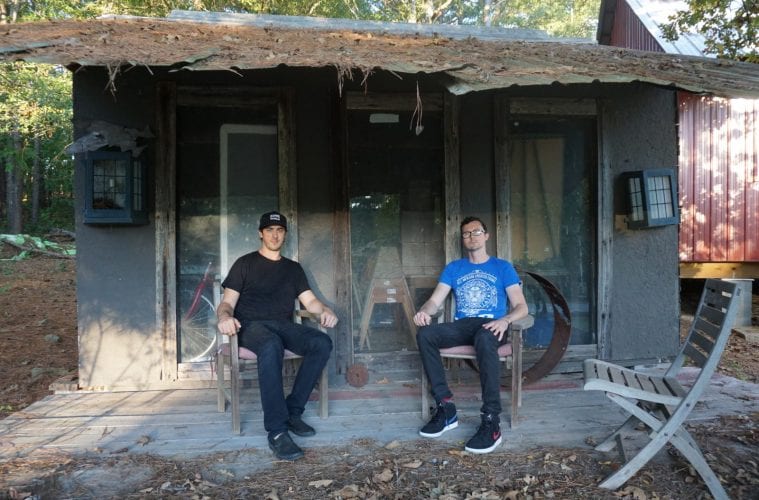 AIR Serenbe’s Transient Project Residency previously welcomed local and touring artists of all disciplines and offered them a place to rest, research, reflect and work. Located in Chattahoochee Hills, the program greeted musicians with an ethereal escape in the form of two cozy cabins, ultimately providing a space of fresh air to fuel creativity. Before coming together for an evening of live music on January 21 at The Bakery, Atlanta natives Nelson Patton and Deantoni Parks sat down with ArtsATL to reflect on time in the program and what new directions they explored musically during their stay.

Nelson Patton is the experimental duo of Dave Nelson’s looped trombone and Marlon Patton’s drums and Moog bass pedals. Combining sounds and ideas crafts a level of textured tones and interlocking grooves that descend deep into the realm of experimental sound. The dynamic duo’s last album, Along the Way, features artist Lonnie Holley. The 11-song record, which was edited from dozens of improvised pieces, reflects the spirit of the duo’s expansive live shows.

Parks, better known by the moniker Technoself, is the musical embodiment of free will, consciousness and intelligence, as shown through his new wave experimental drumming. Parks was a member of the progressive rock group The Mars Volta and is currently the drummer of Bosnian Rainbows and KUDU, which he also founded and produces. Though Parks currently resides in New York, Southern living has left its mark on the musician, who scatters soul- and funk-influenced sounds throughout his works.

ArtsATL: When did you stay at AIR Serenbe’s residency program and for how long?

Dave Nelson: AIR Serenbe has a cool setup — it’s like a community. We stayed in two log cabins and used the time to do post production on an album we recorded at my studio in upstate New York. During the post-production work, we dived deeper into the composition and did a lot more recording.

Deantoni Parks: I did my residency in February for 10 days.

ArtsATL: What was your daily routine during the residency?

Patton: The daily routine was very relaxed in that we had the time and space to do whatever we wanted. Sometimes, the best way for art to thrive is to get the facilitator out of the way and let the artist do what they do best. We brought a bunch of gear from my studio, which is located in Atlanta, with us and made a studio out of our cabins. We set up a control room to complete editing and worked on a lot of stuff we’d already recorded, but added much more. We had the space to make our own schedule, which is such a luxury that we do not often get.

Nelson: I’m really proud at how we were able to structure our schedule and plan things out. We would discuss the form of a song and the arrangement then begin working on it and then record. We imposed a structure on ourselves, and it led to great work in the end. We recorded these songs at our professional-level studios as base material then added classical symphonic forms, like a Beethoven Symphony, as a formal structure and overlaid it on our music. This really got the creative juices going. We broke everything down into movements in terms of symphonic symphonies and used that as a way to dive deeper into the songs. We wouldn’t have had the time to do this without the two weeks we had at AIR Serenbe.

Parks: It was very cleansing being there, especially since I was born about 20 minutes from the area. I’d wake up in the morning with a sense of peacefulness, having a clean palate to attack an idea. I like to start each day with polymathy heroes, in which I choose people like Terence McKenna or historical figures to guide the day’s content. I study the interviews and read on these sources of inspiration. Then, I’ll take the interviews and sound I looked up and convert the audio so that I can manipulate the audio — it becomes the composition, which is where the experimentation and execution takes place. An idea without [execution] is essentially nothing.

ArtsATL: What advantages came from working outside the typical studio? Nelson Patton is the experimental duo of Dave Nelson and Marlon Patton. (Courtesy of Nelson Patton)

Patton: At first, Dave and I thought we’d have an abundance of time. But toward the end, we realized time had flown by. The residency shifted our focus from planning out how to approach a task to allowing additional time to dive deeper than we normally would have. I live in Atlanta, and Dave now resides in New York, so most of our meet-ups are short; we get together, work and go our separate ways. But being at the residency, we were able to focus on the songs, structure of the record and reach a more in-depth level that we haven’t before.

Nelson: What was so cool is that we both have professional studios at home, and in the beginning, we were wondering what we were to do in this cabin without our studios. But we were forced outside of our comfort zones to work in a different space, and there’s something freeing about that. We had extended time to focus on the art. While working at home, art often becomes mixed up in daily life. To have extended time away from all distractions was very nice.

Parks: To be in a house that is in the woods puts one in a different mindset. It’s more of an instant utility; it’s not so abstract. I find that studios I play almost expect more because I’m made in an environment made to record, and there’s a certain pressure with that. A simple space like AIR Serenbe, that was made to be lived in, changed my whole output and relaxed me.

ArtsATL: What product came from your time at the program?

Patton: All the tracking and production is done on our new album. We’re going to New York next month to mix the record with an amazing engineer — who also mixed Lonnie Holley’s Myth. We finished the last bits up at AIR Serenbe. Beyond that, we are shopping the record around to labels and plan to release it this year. Another thing we found inspiring is that this last year we’d been touring a lot with Lonnie Holley. Lonnie had this concept: the flip/flip. It’s when you make a piece of art in the analog domain then take a photo of it and send it into the digital domain. When you start manipulating in the digital domain is what he calls the flip/flip. We had all this raw material that we recorded at our home studios, and we took it through the flip/flip during our time at the residency.

Nelson: From the technical side of things, there was an empty shipping container that we got to get inside and record in — it had incredible natural reverb. We spent three days inside the shipping container experimenting with the sound, and it was surprisingly beautiful.

Parks: While at this residency, I continued to work on my current project, Technoself, as a theory and furthering the philosophy. Technoself represents a reinvention of myself, because the easiest way to create a new reality is to create a new language. The theory is a combination of two words that are important to my language: technology and the perceived self. I felt that I can communicate under this moniker, as a hybrid of humanity and technology. The entire left side of my body is dedicated to an analog approach to music, playing drums and being vibrational, while the right side of my body is dedicated to a palate of samples that I pull from literally anywhere — any sound that I have access to. It all happens in real time; I let my ears guide me. This has given me different results than the techniques that I was taught in school. It’s really inspired a whole new paradigm for me.

ArtsATL: Plan to do a residency in the future? And do you have any final notes?

Nelson: We don’t have anything planned right now, but if the opportunity presents itself, I think we’d definitely be open to it. As far as the upcoming show, we’re just really excited that we get to play with Deantoni Parks at the Bakery.

Patton: Absolutely, we’re both huge fans of his music.

Parks: I loved the design. My father is into construction and building, so I immediately appreciated the use of elements and the economic value of it all — the unexpected touches all really affect the mind state.