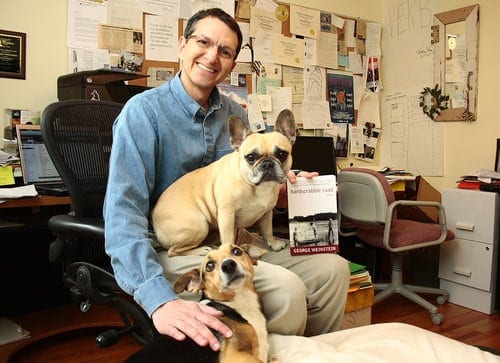 George Weinstein’s novel Hardscrabble Road (Deeds Publishing, 358 pages) follows the poor Southern MacLeod family over the course of 10 years. The narrator, six-year-old Roger “Bud” MacLeod, a sweet if naïve child stunted by a stutter and a port-wine birthmark, tries to navigate life with dignity despite his abusive parents and volatile secrets, which continually threaten to unhinge his already precarious world. ArtsATL interviewed the author via email.

ArtsATL: How did you get the idea for the book?

George Weinstein: Listening to my father-in-law’s 1,001 stories of growing up dirt poor in South Georgia during the Great Depression and seeing the amazingly kind and self-assured man he had become — and wondering how he managed it.

ArtsATL: Hardscrabble and your first novel, Jake and the Tiger Flight, are narrated by very different boys. In the first, Jake comes from a wide-eyed-innocent boyhood, and in your second, Bud’s boyhood is riven with wide-eyed trauma. Can you tell us a little about this? What draws you to write child protagonists, and which character was harder to get into?

Weinstein: Jake and the Tiger Flight was work for hire; the Tiger Flight Foundation contracted with me to write that motivational adventure novel, but it was easy to agree to it because I recognized a lot of myself as a boy with the Jake character they wanted me to create: someone in need of direction and a plan of action to take charge of his life. I was free to write him however I chose, given the character arc that he needed to achieve by the end of the novel, so I mostly wrote him as I had been (though he matured much faster than I did; my arc took a lot longer). The character of Roger “Bud” MacLeod in Hardscrabble Road was more difficult to conceive and develop, because his circumstances were so different from what I’d experienced growing up. Though Bud is roughly the same age as Jake at the start of the two novels, Jake enjoys middle-class luxuries with two loving parents; all of Jake’s development comes from within during the short time span of that book.

Bud is faced with two parents-from-hell, bullies on the playground, and physical deprivations due to the Depression-era poverty in which he lives. In addition, the novel spans about 10 years of Bud’s life, so he had to mature physically as well as mentally and emotionally. That made my work even harder.

ArtsATL: Where did the idea for Ry, the Japanese-American female character, come from? And what is your favorite part or character in the novel?

Weinstein: I liked the idea of grappling with racial issues, but not just of the black-white variety, so I invented Ry. Some research was required regarding ways in which Japanese-Americans were treated in the South before and during the war years. I like best all of the parts that still spark tears when I reread them or produce a smile — it’s nice to still have an emotional reaction to one’s own writing. Roger “Bud” MacLeod, the boy hero, is definitely my favorite. I want to write some short stories about him to post on my website, to spend a little more time with him and his cantankerous family. ArtsATL: Hardscrabble Road is so much a story about race relations and an inherent tenderness despite the raging inequality of Jim Crow. Often your characters connect through their common poverty more than they disconnect because of race. How did growing up in the North, and then moving to the South, inform your experiences of race ?

Weinstein: I tried to remove my views about race from my writing and take on the persona of my father-in-law, on whose childhood Hardscrabble Road is loosely based. He often spoke of the affection he felt for the two black men who sharecropped the field alongside him and his brothers, and other African-Americans he fished with or with whom he otherwise interacted. However, there also was an unspoken agreement about an emotional and physical line over which no one crossed.

In the book, Nat, one of the black sharecroppers, gets angry with Bud for talking overtly about that line — Bud is afraid his aunt will be offended if Nat and his wife show any charity toward, or pity for, her — and admonishes our hero that he definitely “knows the rules” and doesn’t need any reminders. It’s a moment of extreme discomfort for both of them, since such societal mores are never to be discussed between the races but are meant to be handed down from parent to child. Stealing a line from “South Pacific”: “You’ve got to be carefully taught.”

ArtsATL: How long did it take you to research? Anything that struck you in particular?

Weinstein: I listened to my father-in-law’s stories whenever my wife and I visited, and wrote down interesting details and anecdotes, for a dozen years before I embarked on the novel. Then I asked him pertinent questions whenever I needed to know how something tasted, felt, smelled, looked or sounded.

ArtsATL: I did not know there were German POW camps in Georgia.

Weinstein: My father-in-law had told me a number of stories about the German POW camp that was set up outside Colquitt, Georgia, toward the end of World War II. There were no attempted escapes, but the local farmers hired out the German infantrymen (the officers always stayed in the camp) to work the fields (my father-in-law worked alongside a number of them), and a thriving barter economy was created as mothers sent their kids to trade with the POWs for staples the American families couldn’t obtain due to war rationing.

ArtsATL: I found it very interesting that the most vile and violent characters in Hardscrabble Road go on to offer themselves redemption. Is forgiving oneself and asking to be forgiven the same? Did you always know that it was going to be a novel about the many faces of betrayal?

Weinstein: When the villains of Hardscrabble Road forgive themselves, they do so as an easy way out, to escape the guilt from the heartache and suffering they cause. I think being forgiven by the people they’ve wronged would have been far more meaningful but also far more improbable, given the magnitude of their sins, so they rationalize, hide behind religion, or otherwise justify their selfish, hateful actions. I hadn’t thought of betrayal as one of the themes of the book when I wrote it, but, in retrospect, it’s definitely there on many of the pages. Even Bud has to come to terms with betraying the trust of the girl with whom he’s falling in love.

ArtsATL: The Southern rural Depression-era novel seems to feature familiar checkpoints. There is the fishing scene, the trysts with ghosts, the weathered old women who are founts of wisdom, and the Prohibition-prompted bootlegging, all tied up via a tight-knit, busybody even, community. How did you go about making these familiar tropes your own?

Weinstein: There are so many familiar touchstones in Southern rural Depression-era novels because everyone’s experiences in that time and place were so similar. What I tried to do was add details or twists that might not be found in other works. The fishing scene is with nets and the common practice of poisoning the water to yield a larger haul; it’s only the outsider, Ry, who has an environmental awareness that the native children do not. The ghost close-encounter takes a surprising, hopefully tender turn. The wise, weathered old woman is the daughter of a former slave and a clever manipulator of the blacks who respect and fear her.

The bootlegger, Bud’s father, hates alcohol and drinkers and uses Bud and his brothers as human shields so revenuers won’t ambush his truck. The secret to making the familiar seem fresh and unique is in the details: what one can do as a writer to make the scenes realistic and interesting. Goodness knows they don’t always start out that way — I’m as capable of writing hackneyed cliches as anyone — but the magic of rewriting is that you can take those cliches and re-imagine them so that they seem new and different.

ArtsATL: Has your father-in-law read the novel? What does he think?

Weinstein: Unfortunately he passed away in July, but back when I was writing it in 2004, he was amused and a little puzzled that I would bother with this project. Writing books wasn’t a hobby or vocation he would have chosen, though he was a voracious reader.

ArtsATL: Is there going to be a sequel?